Oktoberfest Barbie 2006 Dolls of the World and Happy Fall! 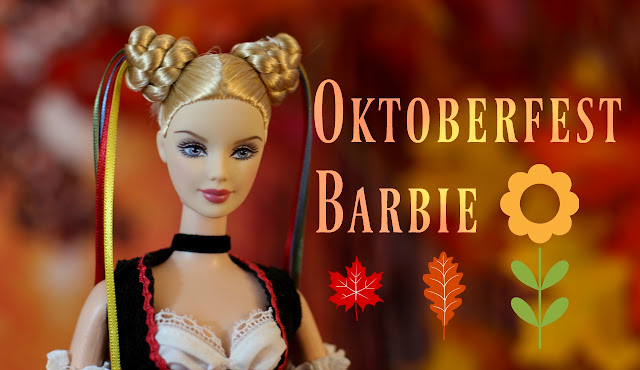 This summer, my husband and I discovered a flea market!  We live in such a rural area, that these seem to be so few and far between, but low and behold, there was one within 20 minutes from our house!  Apparently, it's been there for years, LOL.

I was really lucky to stumble upon someone who was selling her daughter's Barbie Dolls of the World collection and she had a bunch of dolls there, but this one in particular caught my eye. 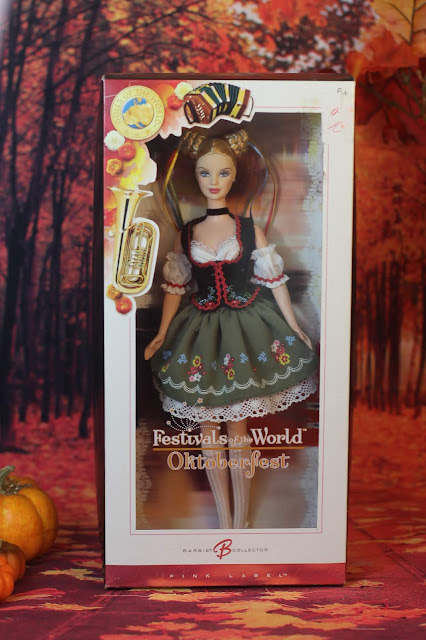 2006 Oktoberfest Barbie!
She was listed for $10 brand new in-box, so I thought that was a pretty good deal!
I LOVE the Dolls of the World collection, but unfortunately I only just started re-collecting Barbie again at the end of 2015, so I missed out on pretty much all of the dolls that are already out.  And there are A LOT of them.
I was able to grab a bunch of other DOTW dolls from this seller, mostly out of box, but they were in great condition and I'll make a post soon to show you who else I found. :) 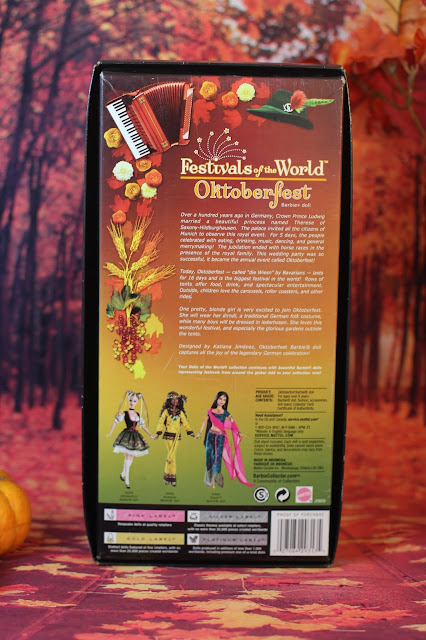 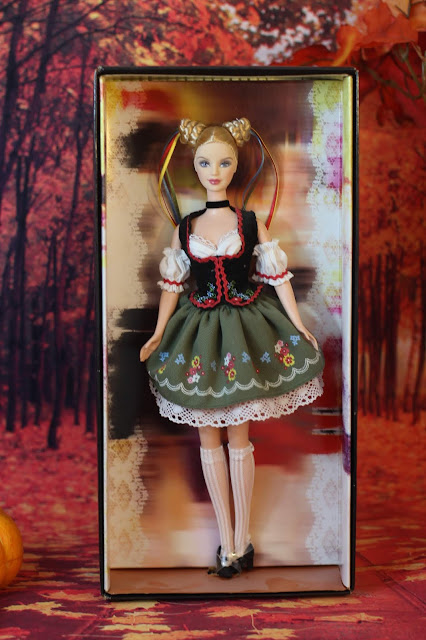 I decided to take mine out of her box as I am not really an "in-box" collector; I just don't have the room.  She comes with a stand, collectors card and a certificate of authenticity, which is nicer quality than the newer Barbie Collector dolls!  Although, I'm sure that's not a shock to most of you, now that we can see that Mattel has made a pretty slow and steady decline into cheaper, crappy overpriced dolls! 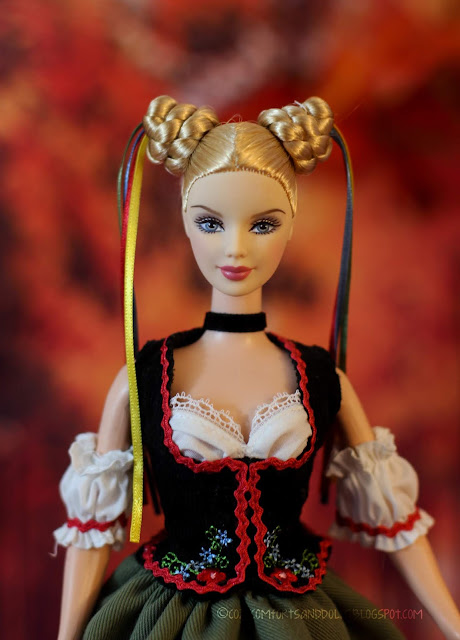 She has a very sweet face and I believe this is the closed mouth Mackie mold (one of my favorites) and her hair style is really unique! 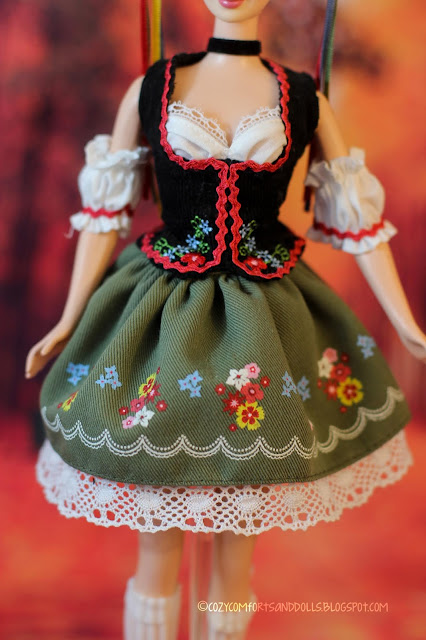 She's wearing a traditional German dirndl costume that consists of three separate pieces.  The fabric is thick and durable with some tiny embroidered flowers on the bodice. The skirt has a second lace layer underneath  The arm bands are separate from her outfit and she also wears a black choker necklace. 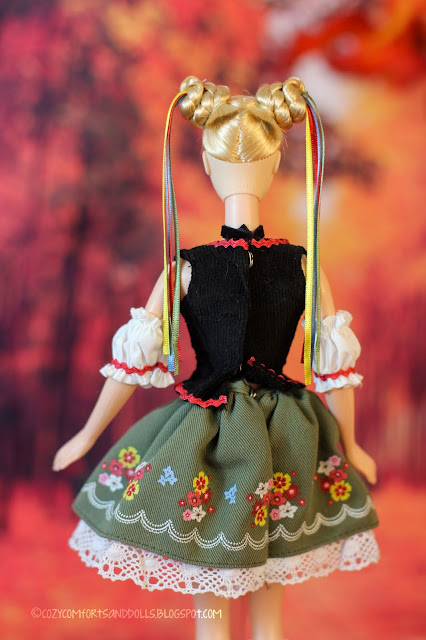 I love those colorful teeny tiny ribbons that are coming out of her hair! 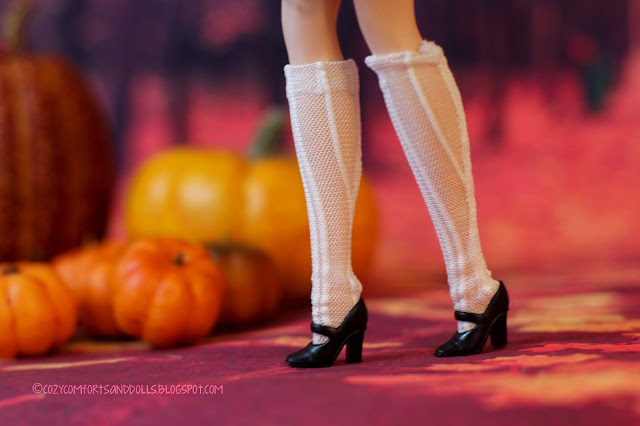 Her stockings are textured, thick and very good quality.  Shoes are plain mary-jane pumps, but do the job.  You kind of have to cram the feet down into the shoes and I feel like this "shoes sort of fit" effect is pretty common with dolls that are wearing stockings.  No big deal in my book, though! 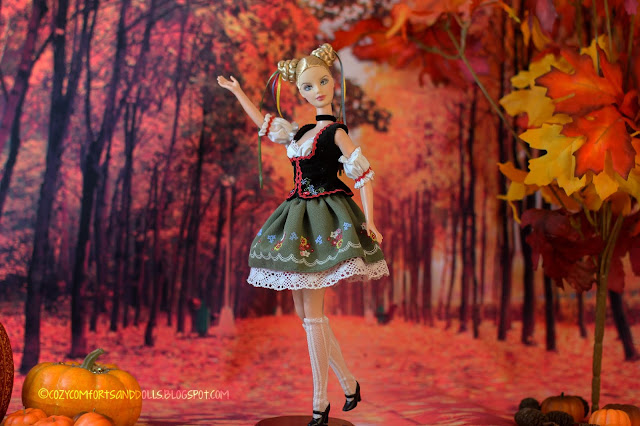 Overall, I'm so happy to have found this doll!  She's sitting out on display helping to promote Autumn cheer as we play this game we always do this time of year where we "see how long we can freeze before we turn the heat on."  ;)
The only thing that would make her more perfect, is if she came with a tiny pretzel and a big mug of beer.  And a tiny accordion. :)


Just for fun, here's a little behind the scenes of this photo shoot.  I was excited to get the "fall backdrop" out. :) 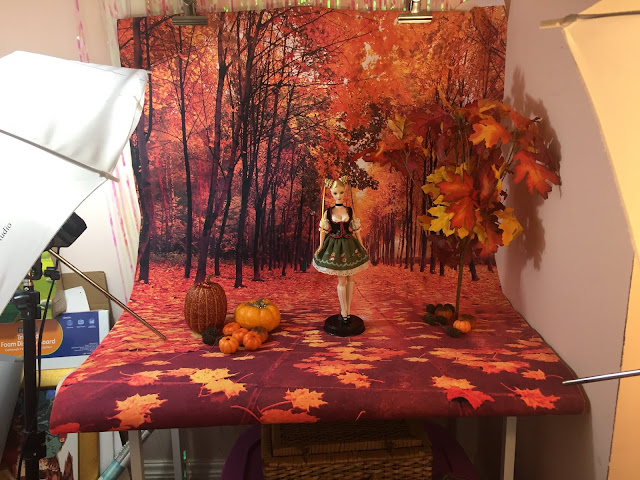 Hope you are all having a Happy Fall (or Spring!) where ever you are.