Although, I don't really collect Lalaloopsies, per say, I have managed to grab a few of the minis and tinies that really stood out from the crowd this past year.
My all time favorite ones (besides the Wizard of Oz

themed ones) are these 4 cute little gals from the Seasons collection that came out last fall.
Pumpkin Pie and I made this little review for you all, but for whatever reason I forgot about it and found it the other day in my photo archives!
Even though these can't really be found in stores anymore, I wanted to write up the post because I love them so much. :)  Maybe they are still available at other stores, but I haven't noticed them in our local Walmart or Target where I do almost all of my toy hunting.

You can still find them on Amazon, but some of them are pricier than others, unfortunately.  I think I paid around $6.99 a piece for them originally. 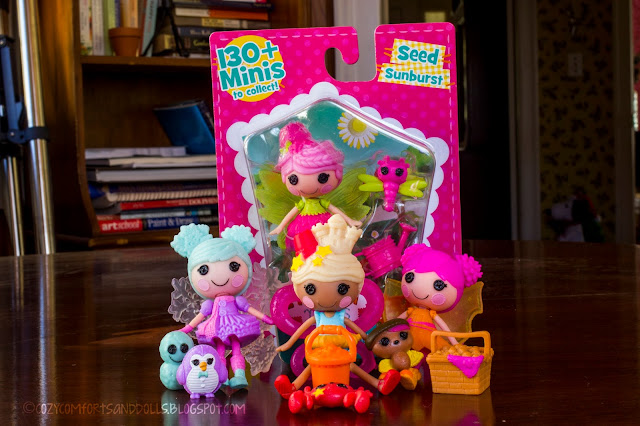 Here's the gang.  Each one comes in their own colorful package displaying which season they represent.
They each come with 2 additional accessories.
I just think they are ADORABLE.  I love anything with a "season" theme.  I love anything that is fairy themed!  Win-win. 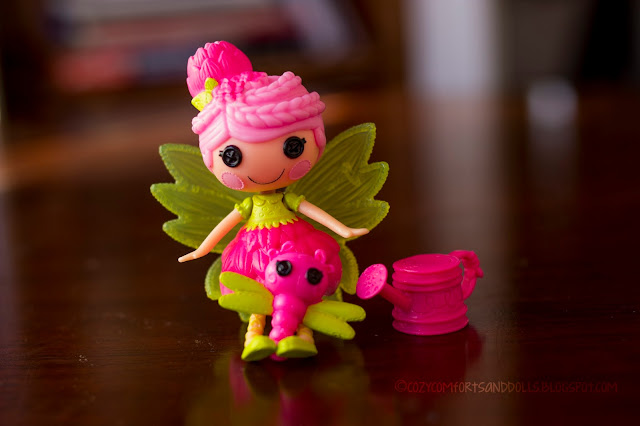 with her pet dragonfly and watering can. 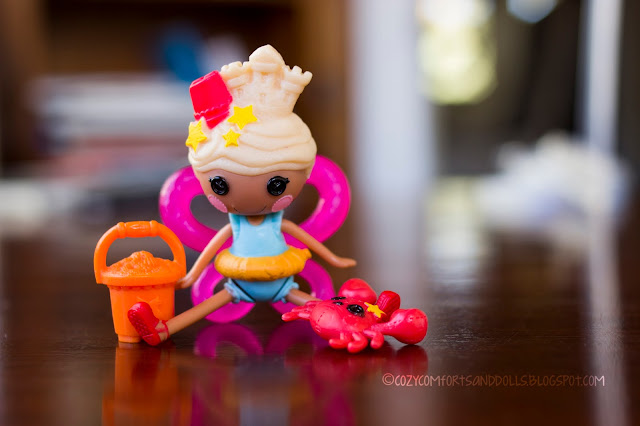 and her sand bucket and pet crab. 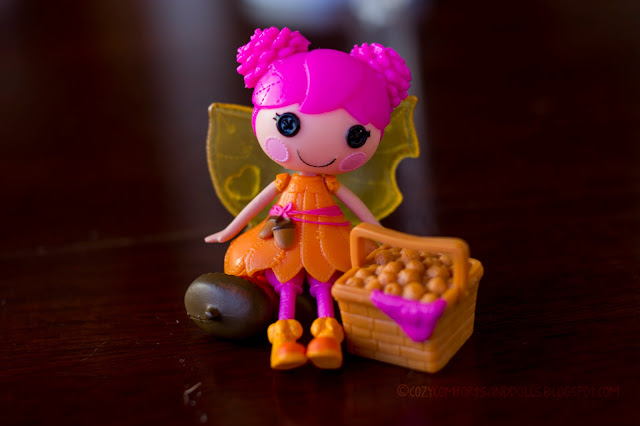 and her pet bat (faceplant!) and basket of acorns. 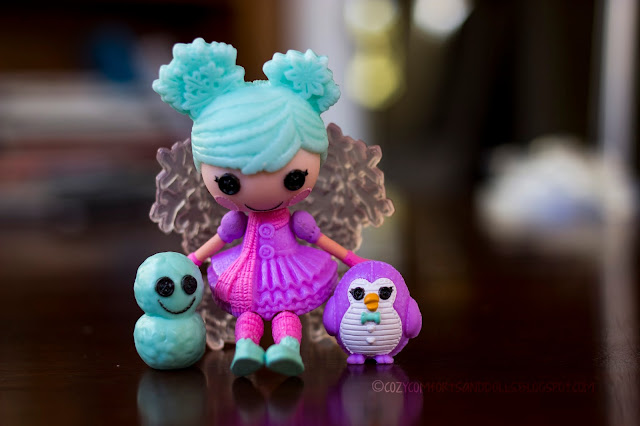 and her pet snowman and penguin.


I mean aren't they just adorable???  I love them.  I love their bright colors, tiny details and fairy/season themes.  I'm interested to see what Lalaloopsy minis will come out this year.  I've already noticed the Fruit themed ones and they are adorable as well.

Which one is your favorite?
I think mine is Autumn Spice. :)


AMAZON DISCLOSURE: I participate in the Amazon Services LLC Associates Program, an affiliate advertising program designed to provide a means for sites to earn advertising fees by advertising and linking to Amazon properties including, but not limited to, amazon.com, endless.com, myhabit.com, smallparts.com, or amazonwireless.com. 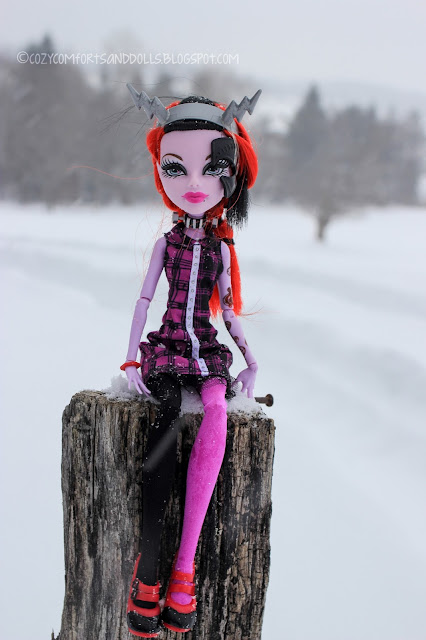 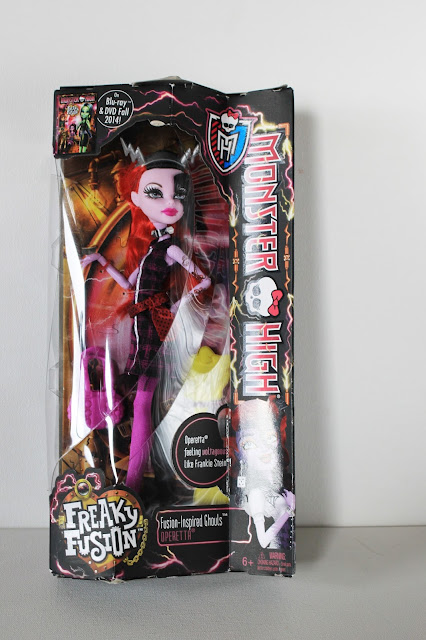 Freaky Fusion Operetta was my first Operetta doll and there's a funny story about this one.
One day she just showed up in the mail and I was surprised because I didn't remember ordering her!  Turns out Pumpkin Pie (who was 5 at the time) ordered her off of Amazon from the iPad accidentally using the 1-click shopping button.  Fun!
So we now have an Operetta in our collection. :) 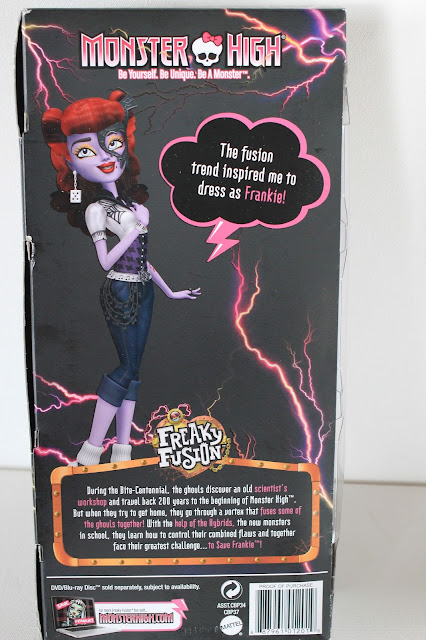 Although I prefer to collect the signature version of each character, I do not have the signature Operetta.  She is only found on the secondary market at this point and I'm not sure if I like her enough to pay the extra money just to have her.  There are many other versions of Operreta that I prefer, so I may just get her outfit instead.
The photo on the back of this box is what the signature version of Operetta looks like in case you aren't familiar with this line. 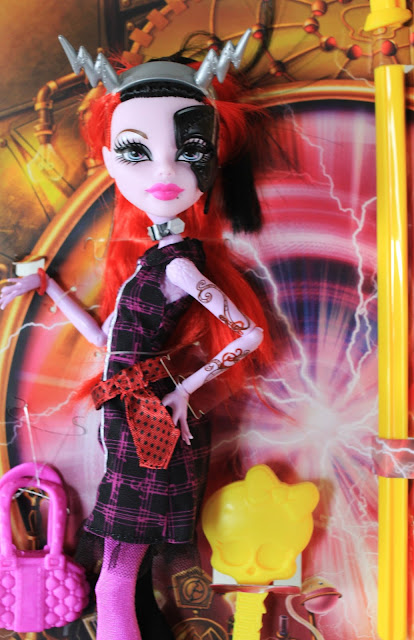 This version of Operetta was created to coincide with the Monster High movie that was released in 2014 called Monster High: Freaky Fusion

.  It introduced a few new hybrid characters such as a skeleton moth

and a zombie unicorn

as well as fusing some of the main characters together (Lagoonafire

Draculaura/Robecca, etc.) It was a really cute movie and the girls and I really enjoyed it. A few of the characters end up just having "fashions inspired by the other ghouls", which is the case for Operetta.  She is fused with Frankie's style. 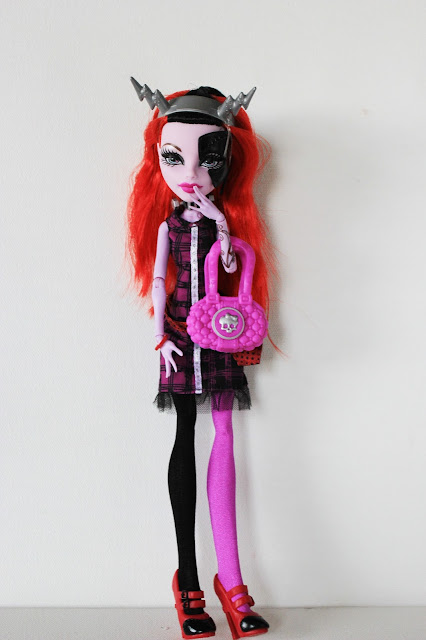 Here's Operetta straight out of the box.  She also comes with a stand and doll brush.
She retailed originally at around $14.99, but is currently on sale for $11.99 on Amazon.
Normally, I wouldn't put red, black, pink and purple in an outfit together, but it seems to work pretty well. 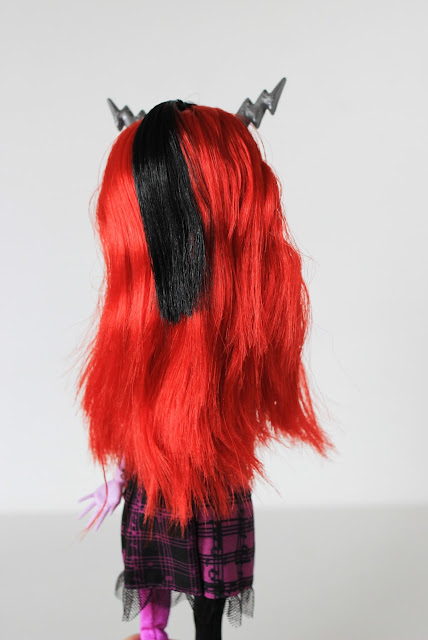 She has straight hair that was very soft and easy to brush.  I also like the extra detail around the hem of her dress. 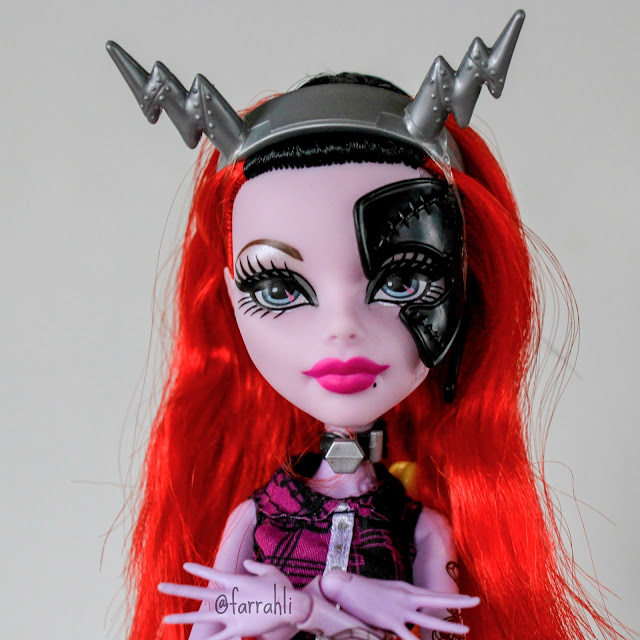 She has one of the prettiest Monster High faces, in my opinion.  I love her tiny beauty mark and full lips. 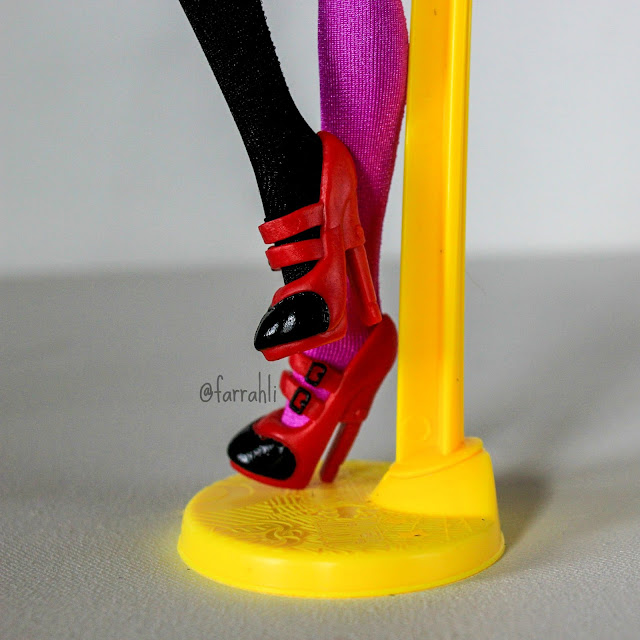 Character-wise, Operetta is the daughter of The Phantom of the Opera.  Her animated character is portrayed with a strong Southern American accent and is very sassy and strong-willed.  Her signature style is reminescent of the 1940s (although later versions of her seem to channel the 50s), but her Freaky Fusion doll is much more modern.  She has a very powerful singing voice that can debilitate anyone that hears it.  Although she is a phantom, she always appears solid in form, unlike other "ghosts" such as Spectra  or Sirena. 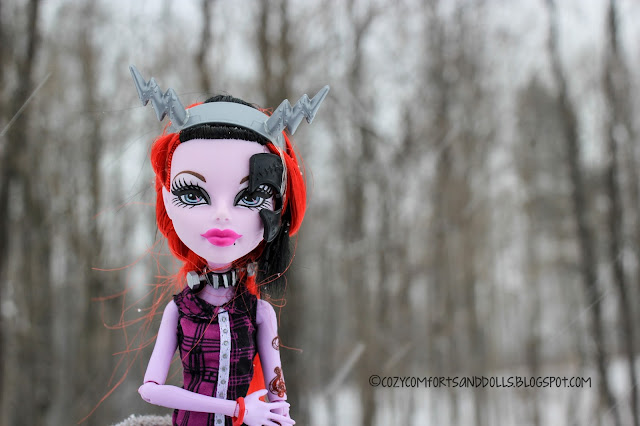 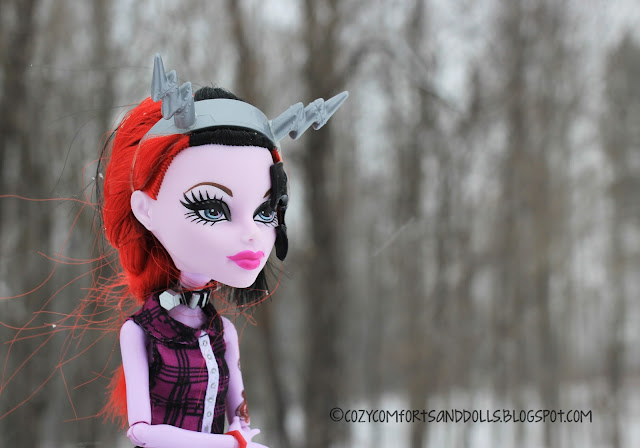 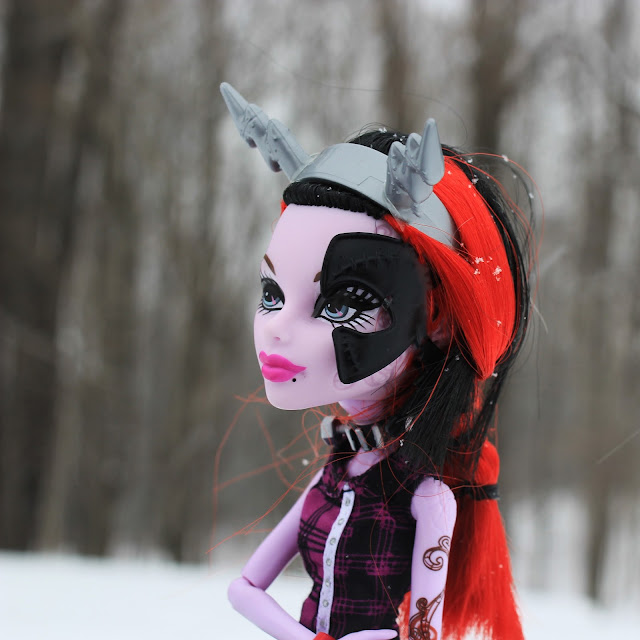 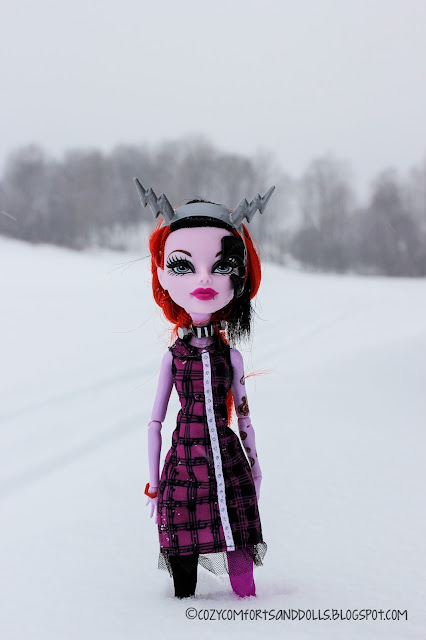 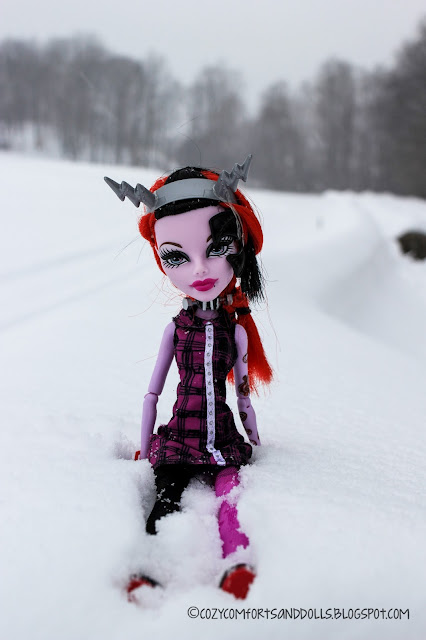 These photos were actually all taken last winter after we had [one of our many] snow storms.  I never got around to sharing them then, so thought I would do so now!

Overall, this is a cute version of Operetta and a great doll for younger collectors due to her low-maintenance straight hair.  I love her cute style and hope you enjoyed the review.

All reviews are 100% my opinion.  This doll was purchased by me for my own collection.
Cozy Comforts and Dolls is a participant in the Amazon Services LLC Associates Program, an affiliate advertising program designed to provide a means for sites to earn advertising fees by advertising and linking to www.amazon.com.  Thank you for your support!
Posted by Farrah at 8:56 PM 20 comments: 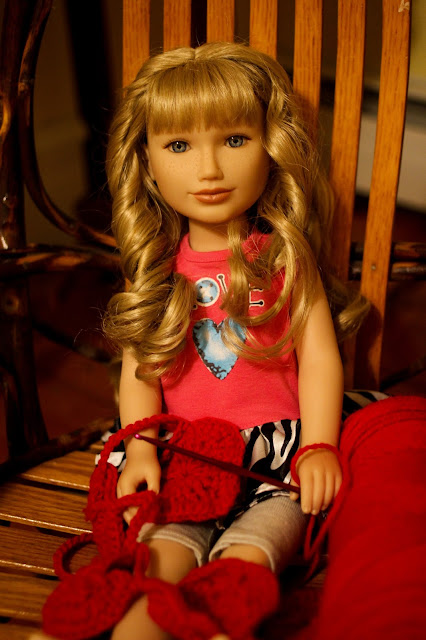 Happy Valentine's Day, everyone!  Ingrid (Karito Kids Zoey doll) wanted to show you our crochet hearts we made in order to increase the festive vibe around here.
I don't really decorate at all for Valentine's Day, so I wanted to add a little something just for fun. 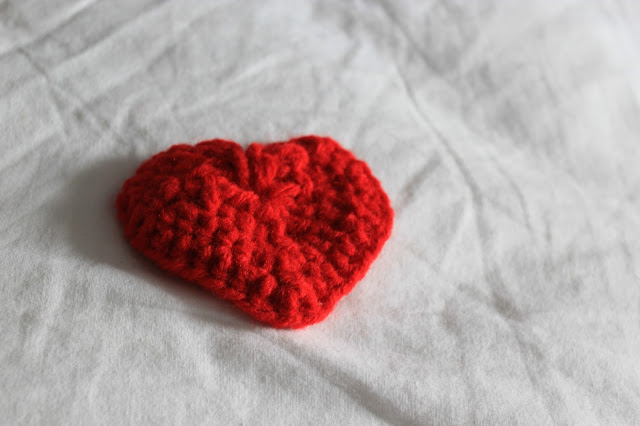 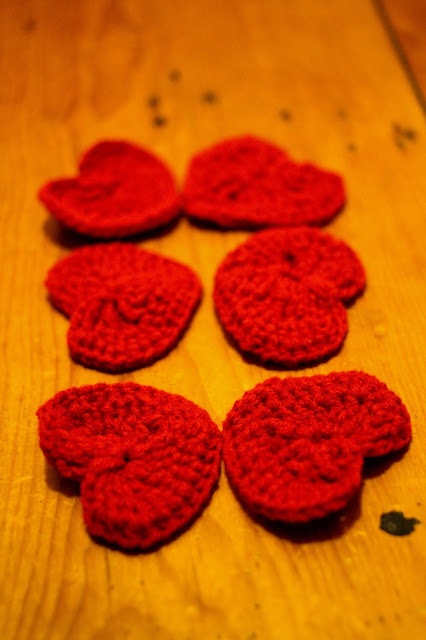 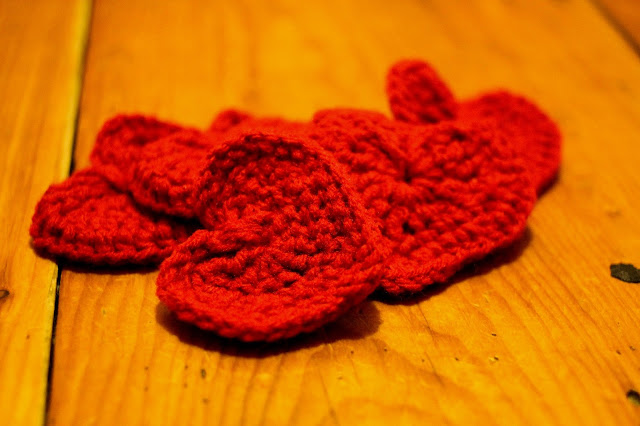 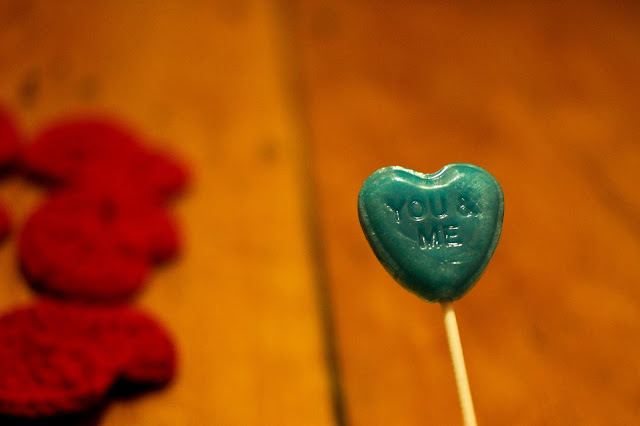 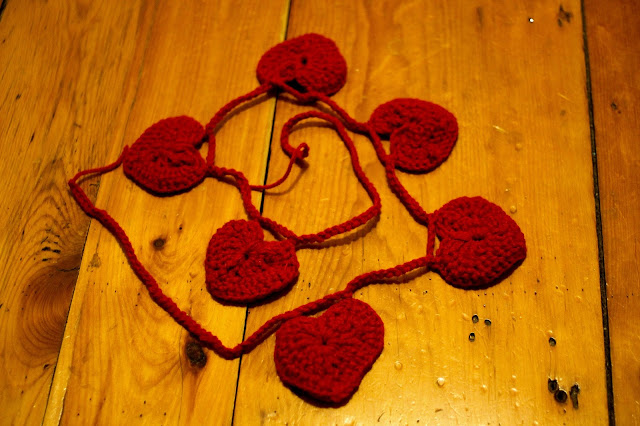 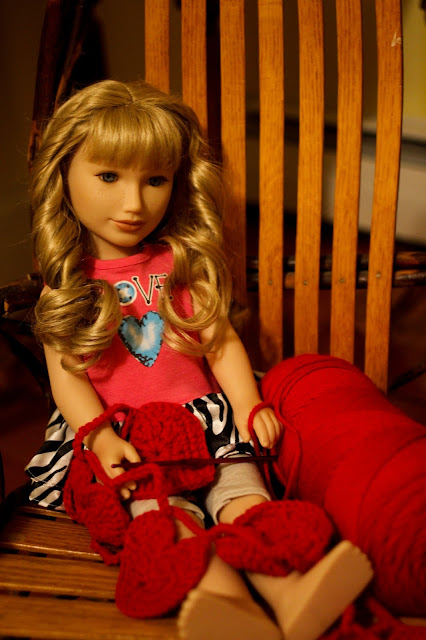 Ingrid is our crochet addict...she just learned so this was the perfect little project to get started.  ;)
It was a fun and easy and adds a cute touch to the family room.
The girls made some cute Valentine's at the library...very vintage looking! 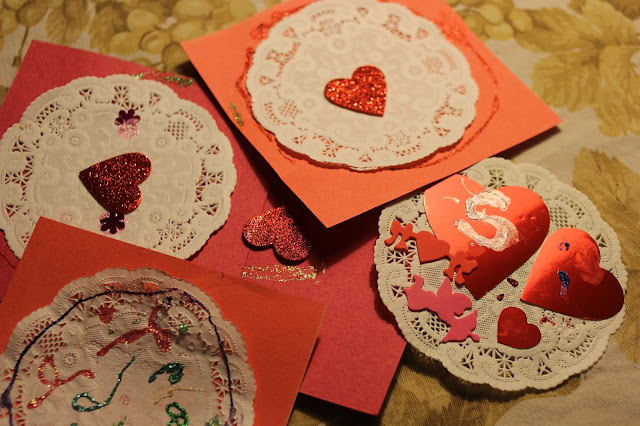 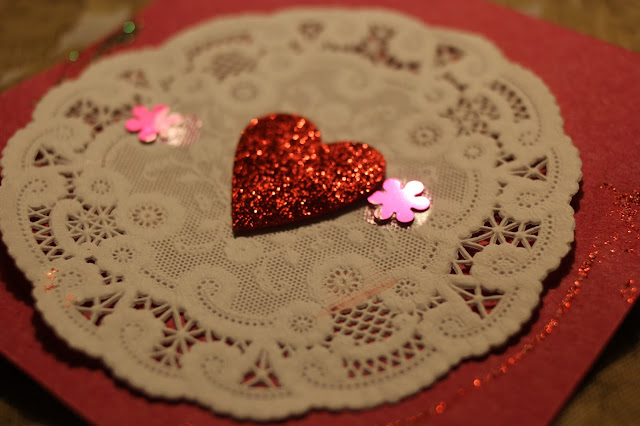 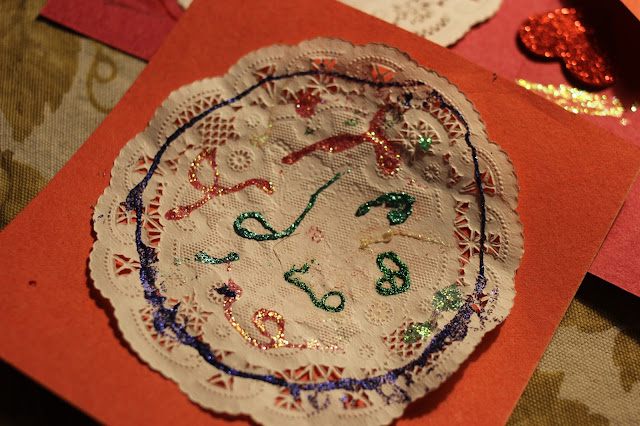 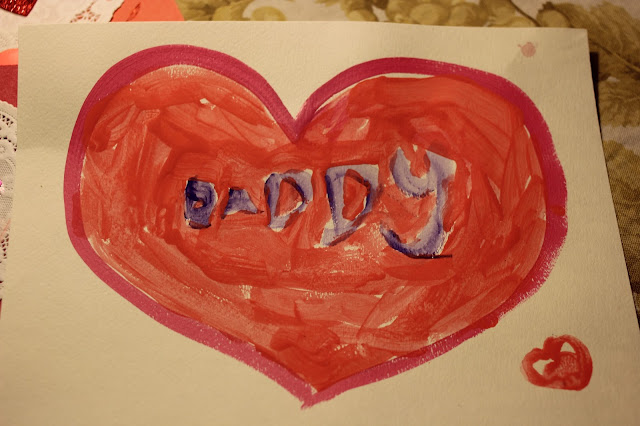 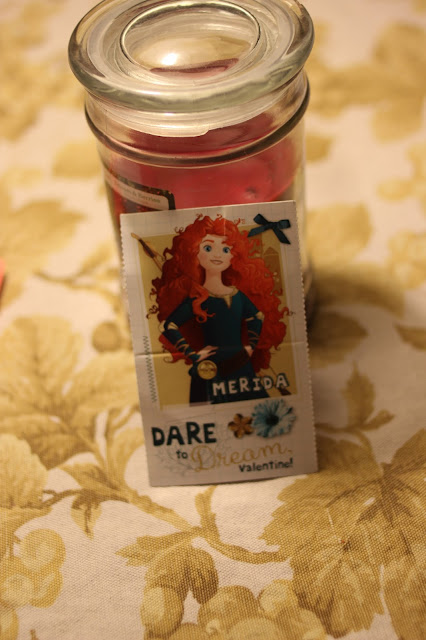 I hope you all have a wonderful Valentine's Day spending the day with your partners, family, kids or indulging yourself.  I'm going to go get more chocolate right now! :)