My love for Zoey-a Karito Kid 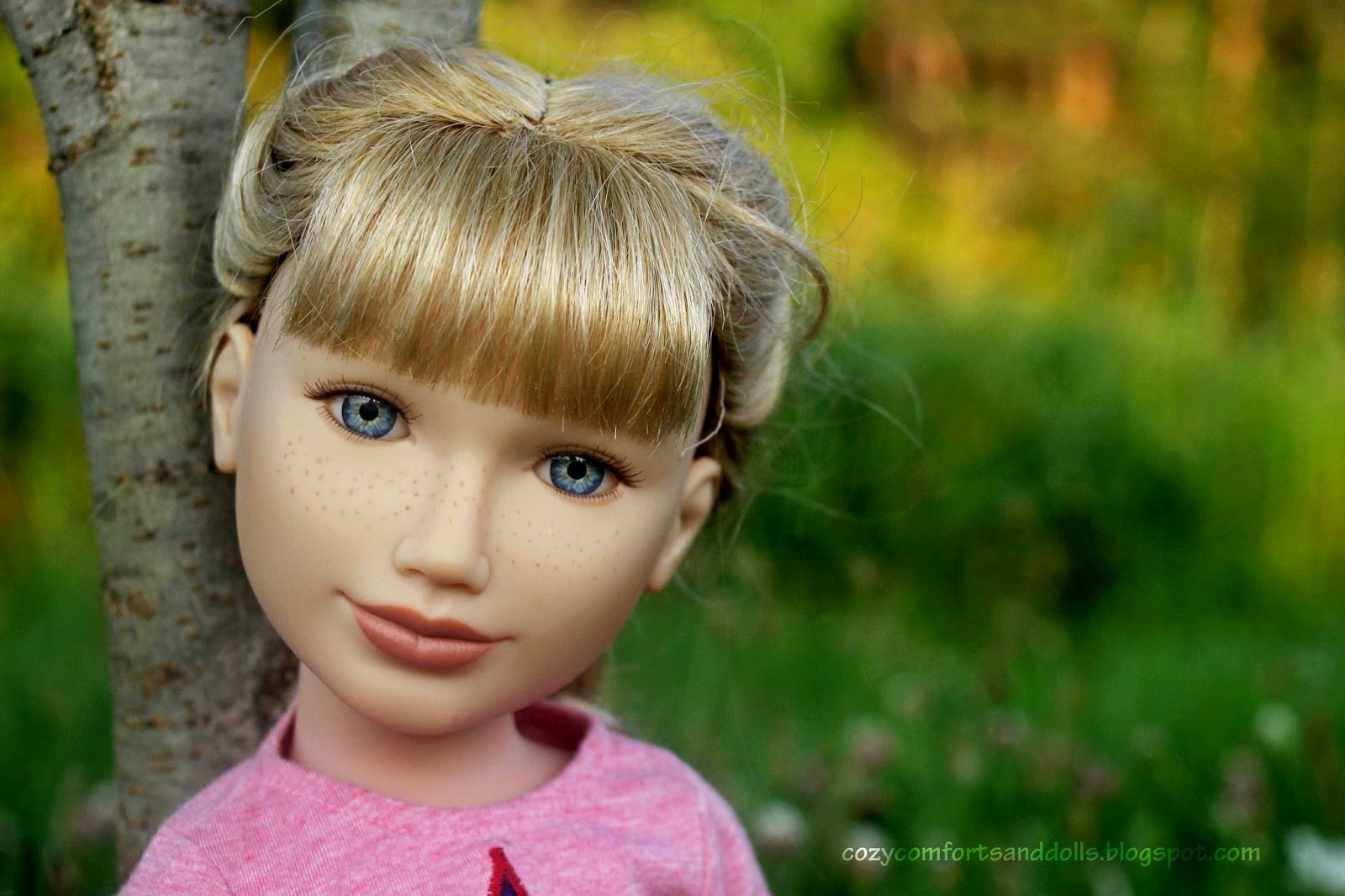 Hi everyone!  The first thing I wanted to say was thank you so much to everyone who has checked out my blog this past month!  I am over 500 views, and am so tickled that there are actually people clicking on here to view photos and see what my little family (both doll and real) are up to. :)  And a big thank you to my 2 followers! :):)

It's been a while since I talked about dolls, which was actually my initial reason for starting up this little blog.  I haven't really gotten my indoor photo situation quite right yet so I've been putting it on the back burner for a bit until I get it all sorted, but wanted to share a few photos I had taken of my lovely Zoey doll when we were still back at my old house. 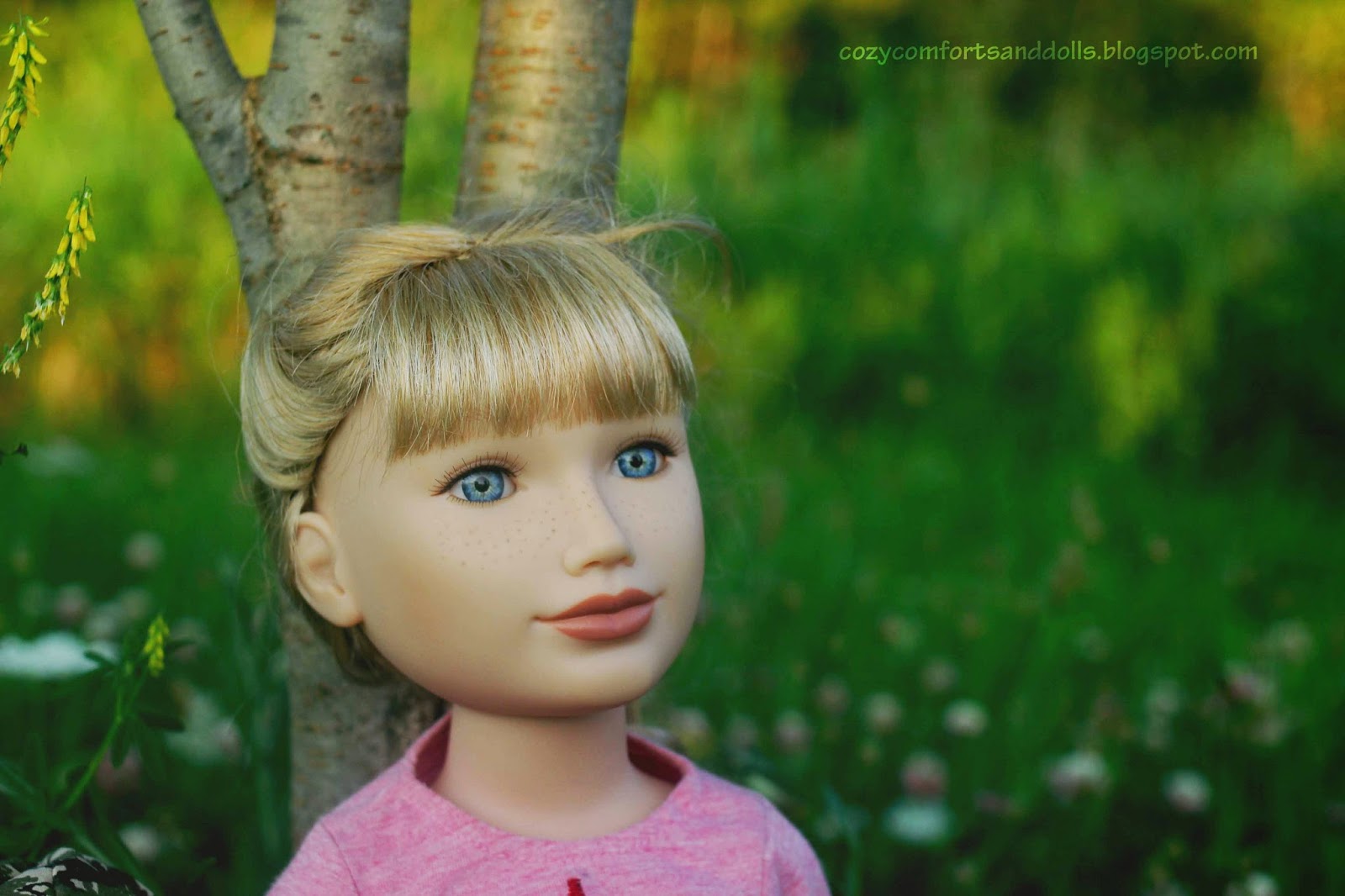 Zoey is a 21 inch Karito Kids dolls initially released in 2007, but has unfortunately been discontinued.  There were 6 different dolls released, each representing a child from a different country and a portion of each purchase was donated to Plan USA, a global children's charity.   There is more information here about the other dolls that were also released with Zoey as well as 2 more lower cost dolls (the Karito Kids Giving Girls.) 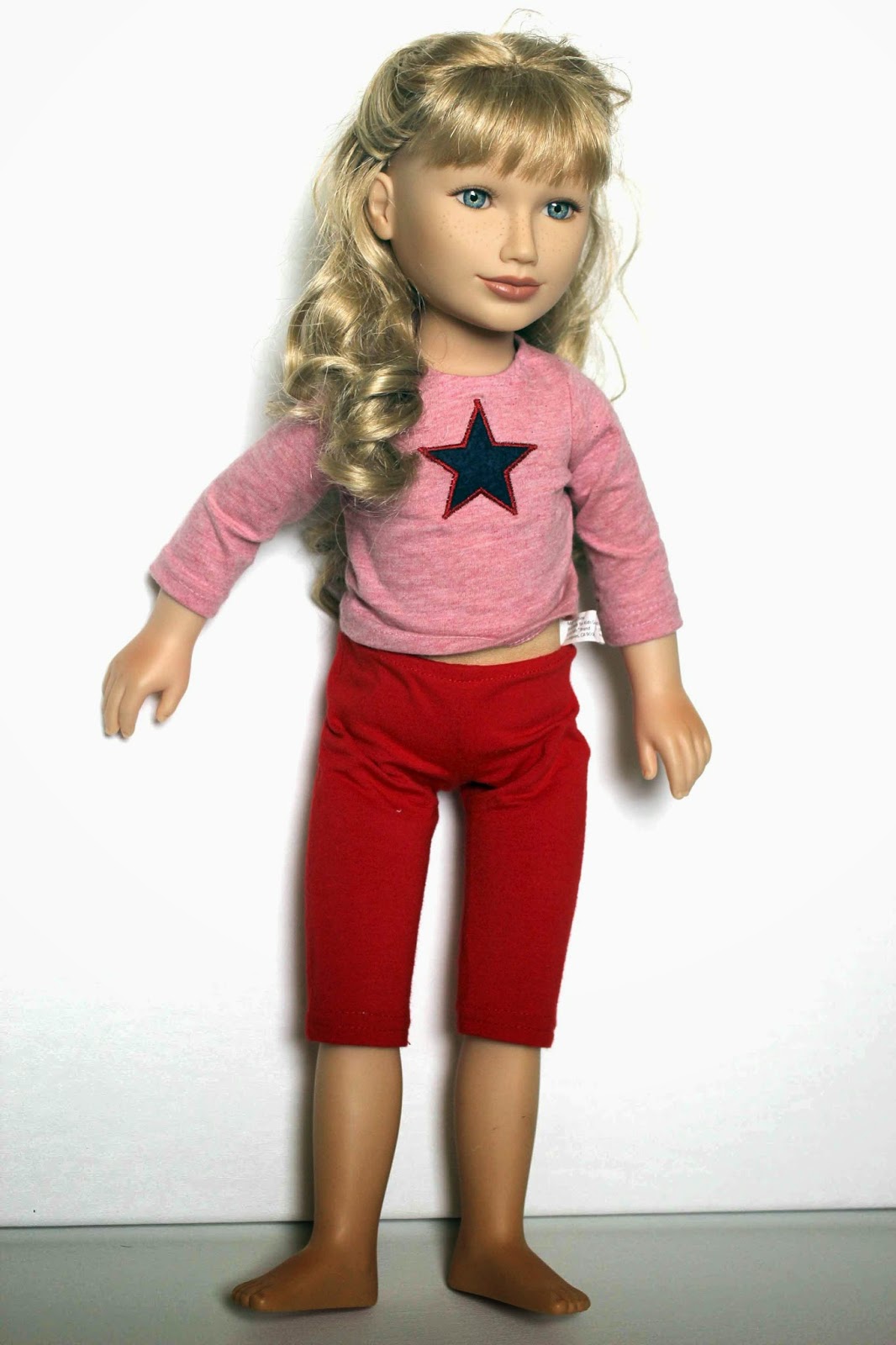 You forgot to pull down, my shirt, Farrah!

I first discovered this doll line from Emily's blog "The Toy Box Philosopher" and here is the link to her amazing review of these dolls.  Her review is much more detailed and talks a bit more about the history and charity piece of what makes these dolls so special.

Each doll was sold with her related book at around $99.99.

I ended up finding this lovely gal used on Ebay.  She was missing her book, red hat and black sneakers (I have her skirt, but she's not wearing it here ;)) and she was around $40.
Zoey's character is supposed to be an American girl living in NYC.  She wasn't on the top of my wish list at the time as I wanted to get a doll representing a different country than the US, but when she became available for such a great price, I decided to get her anyway and possibly give her to Pumpkin Pie as a birthday present.

Sorry, Pumpkin Pie, but Mommy wants to keep her instead, lol. 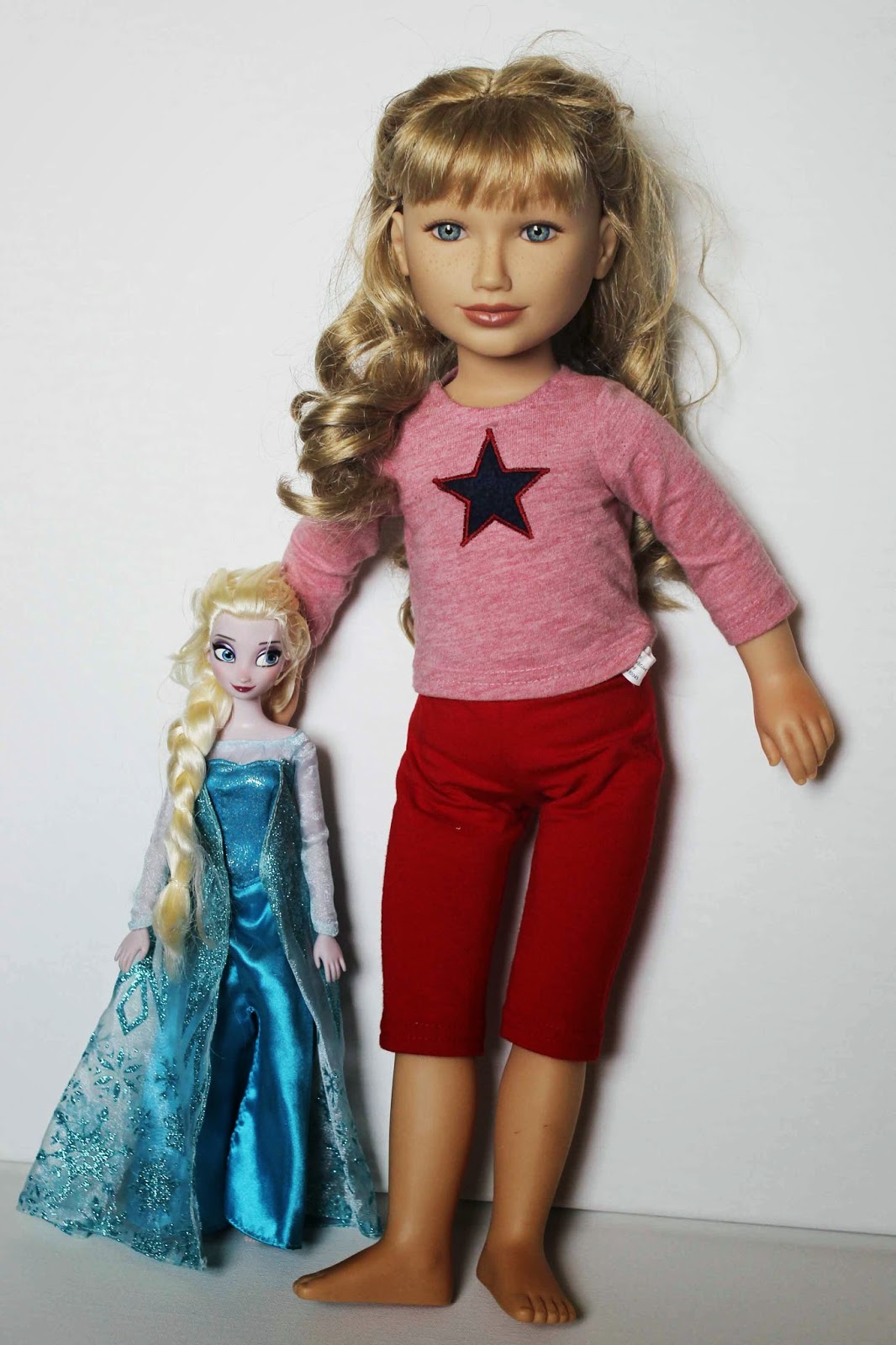 Here she is next to Disney's Elsa who is about 12 inches tall. She's made of mostly vinyl, but the lower part of her torso is cloth, similar to an Americal Girl Doll, but with a larger chest plate. 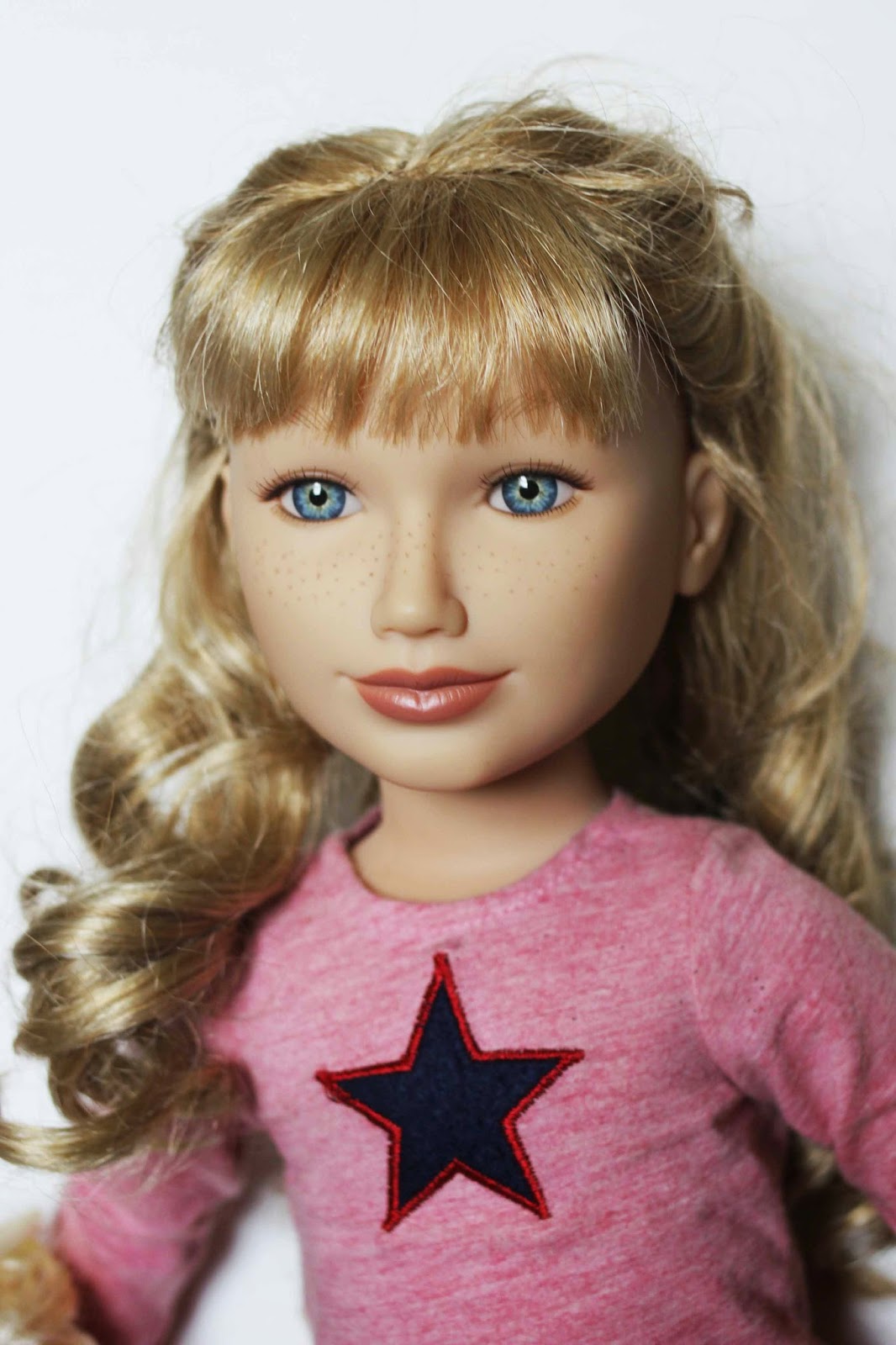 She has beautiful, shiny golden wigged hair.  Since I am new to doll collecting, I am not even sure what to do with it.  It is in pretty good shape so I decided NOT to run a brush through it as I didn't want to disrupt her cute ringlets. 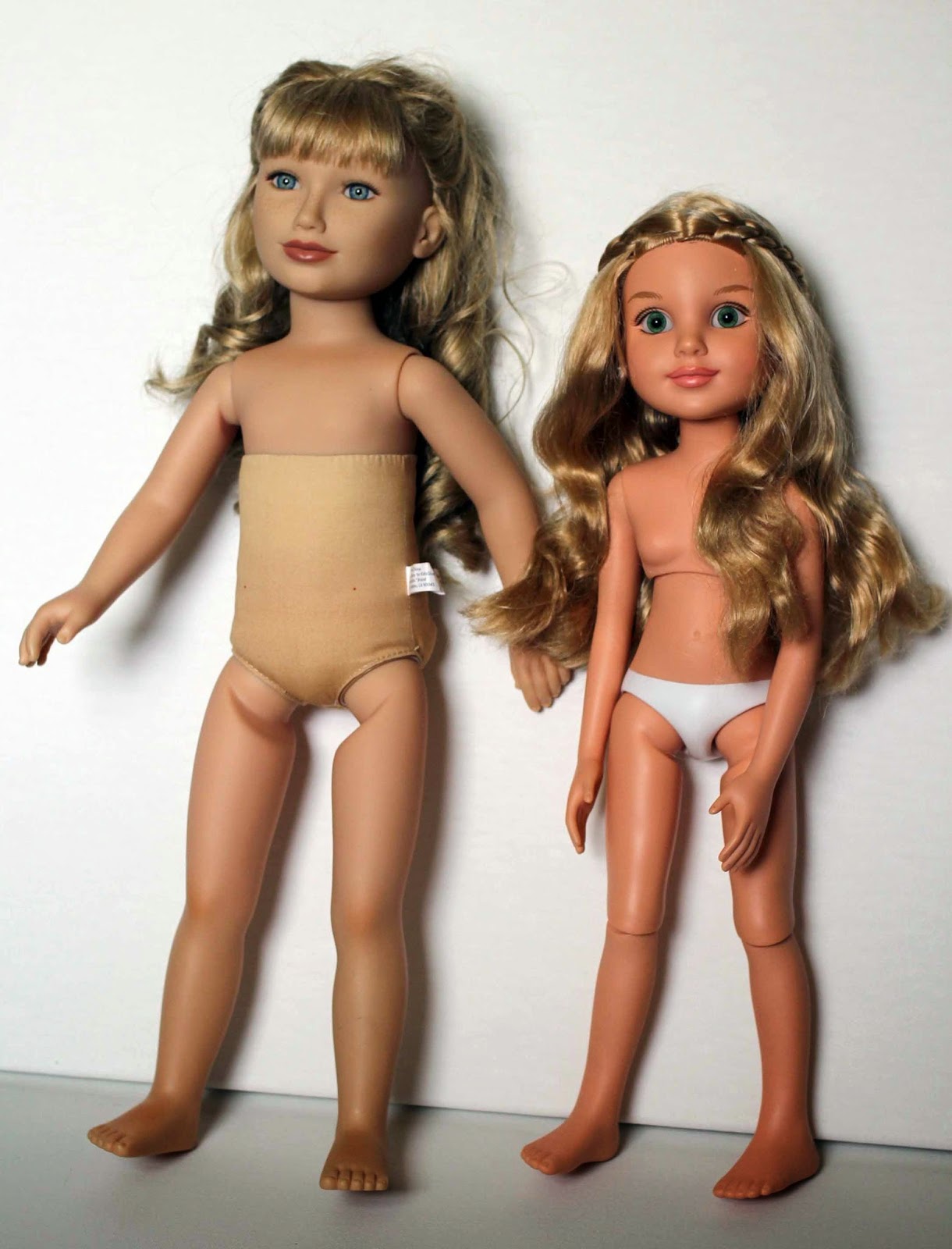 Here she is with the only other similar sized doll that I currently have.  Kaitlyn is a BFC Ink doll that I found on Ebay as well (Ebay and I became good friends this summer.)  Kaitlyn has a bit more articulation, but Zoey is much more impressive in person.  Zoey's skin tone is a bit more realistic of a fair-skinned Caucasian, while Kaitlyn looks a tad more orange in real life.  Kaitlyn's face appears much more vacant and cartoonish as well, but she was must less expensive then what Zoey would've origianlly retailed at.
They make good sisters, though. :} 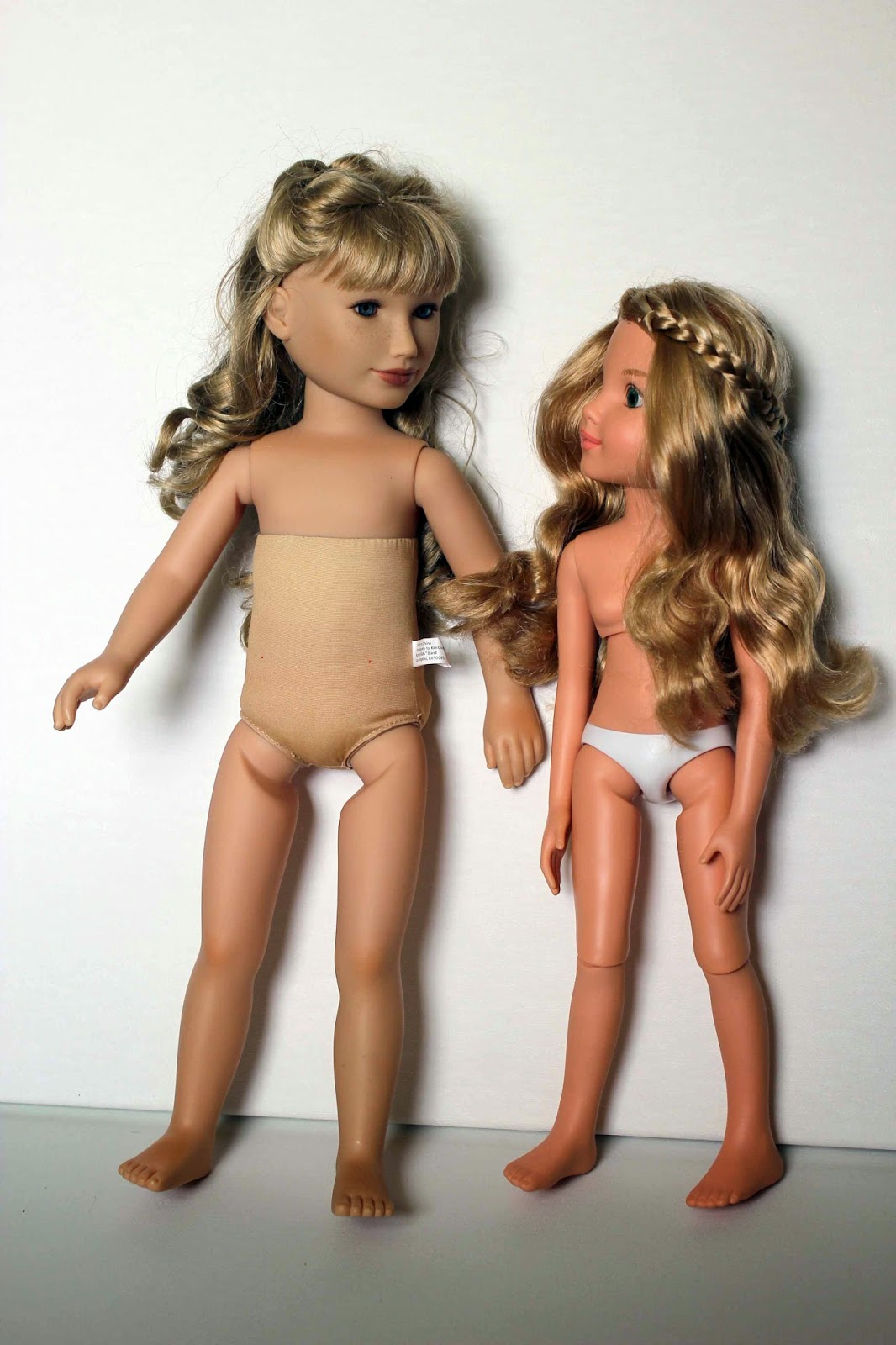 Unfortunately, since Zoey was previously owned, her joints are a bit loose.  She has 5 points of articulation (head, shoulders and hips) and due to the looseness of these joints, she has a hard time standing very well on her own, although I can see that she probably did at one time.
Kaitlyn is practically like a rag doll. 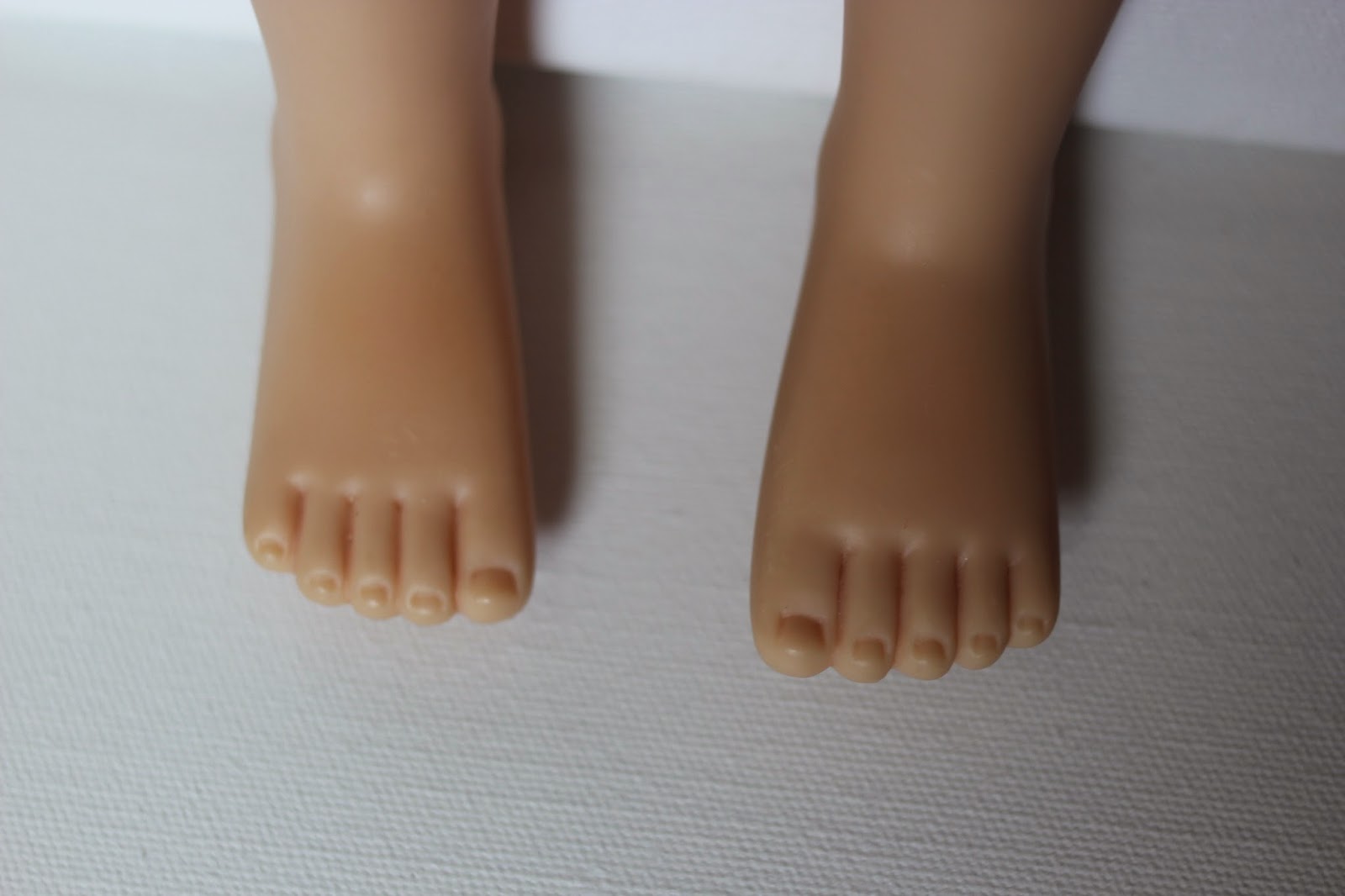 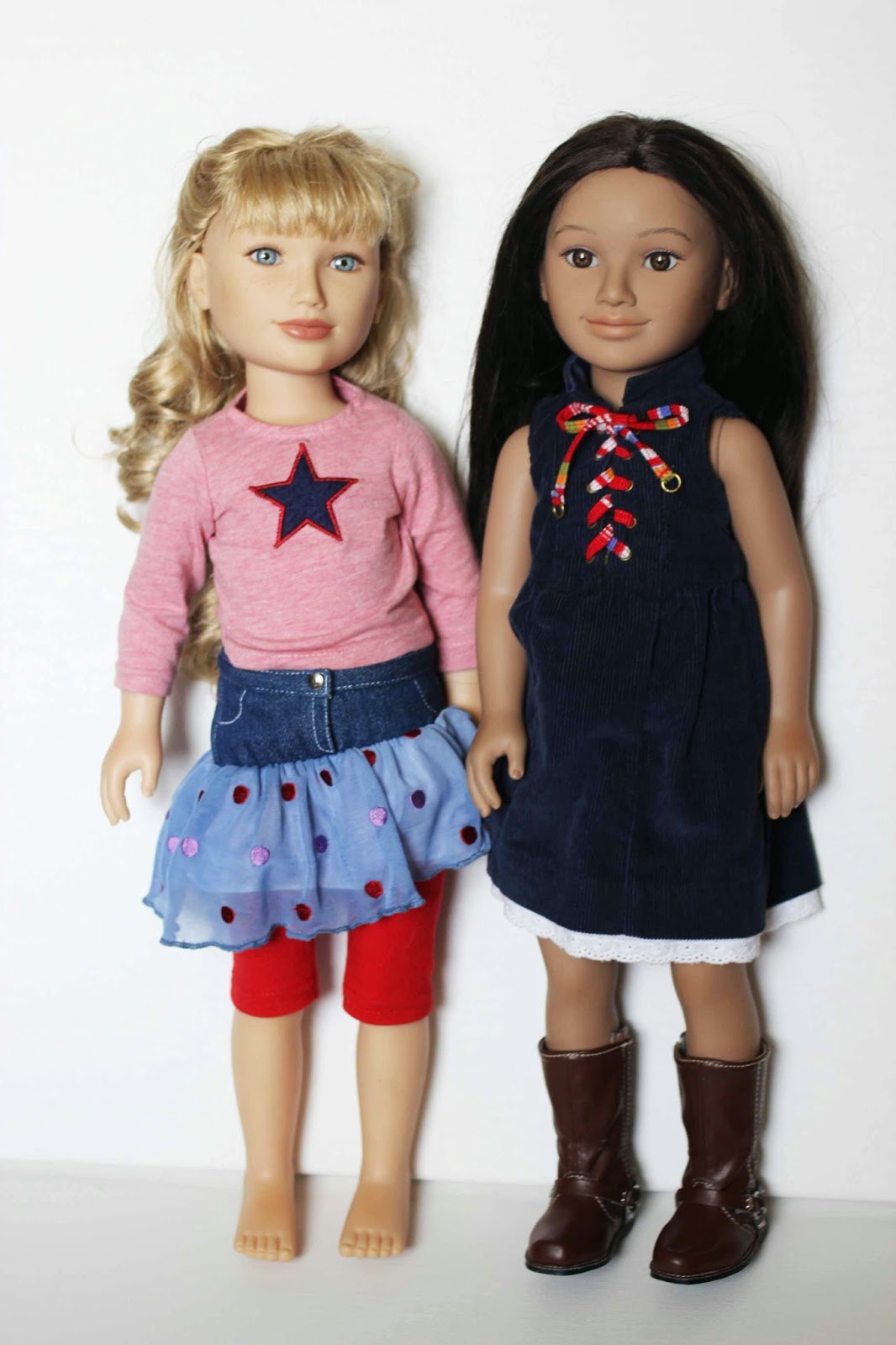 About a month after I got Zoey, I bought Pita as well.  She was a total impulse buy.  I was laying in bed, on vacation in the Adirondacks doing my nightly iPad Ebay scan and saw her used as a Buy It Now option for $45.   She looked like she was in such great condition and was only missing her book (shirt and jacket not shown here) so I quickly scooped her up. 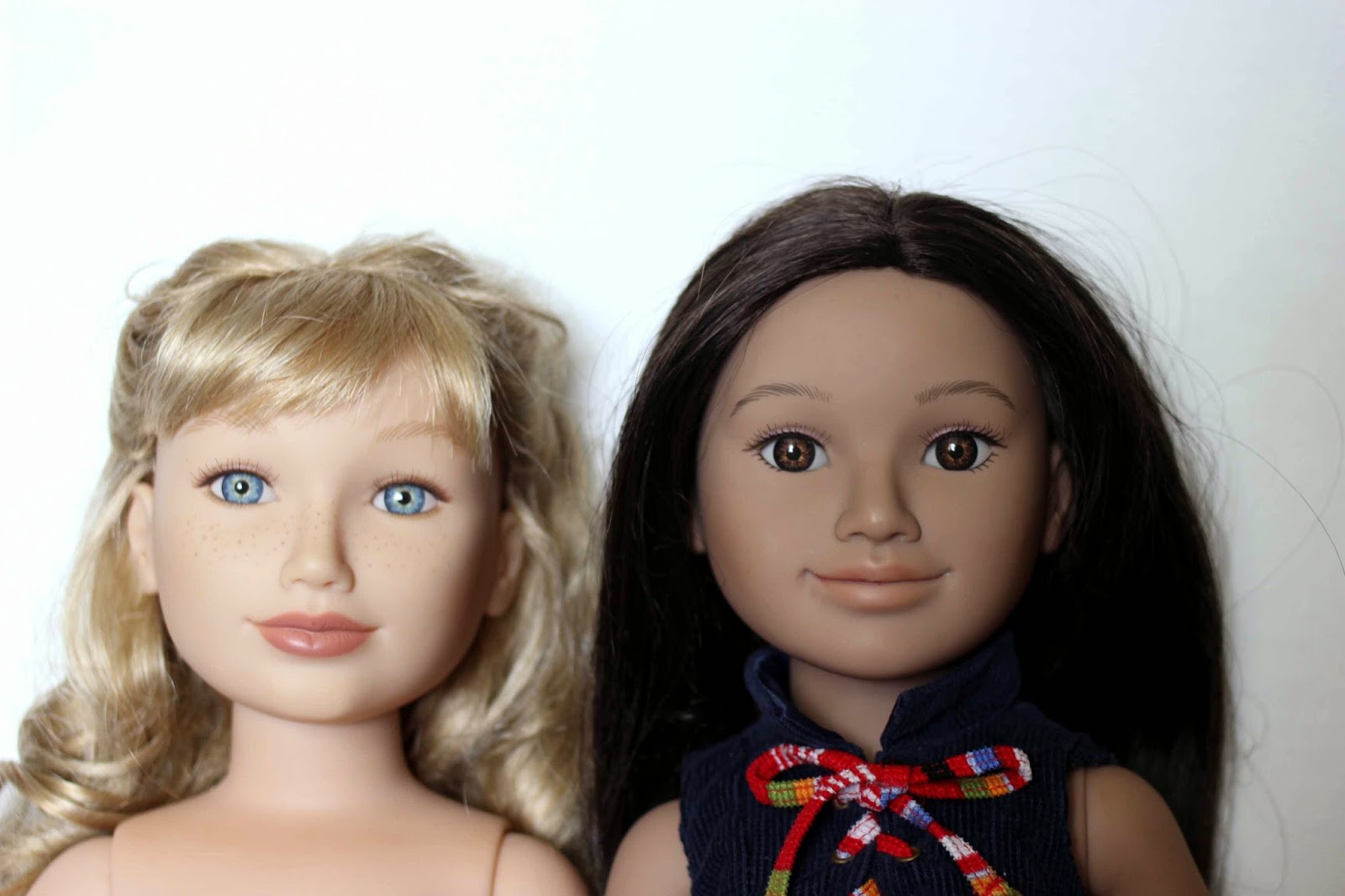 I am really glad I did as Pita is a gorgeous doll as well.  Pita is a Mexican girl and as you can see they did use a different face mold.  Pita's eyes are rounder, her nose is a bit wider and her smile is a little perkier.  My particular doll's lip paint is a bit faded so I am trying to figure out how to remedy that situation.  :}

Her skin color appears a much more of a beautiful caramel in the photos then in real life.  In real life, she looks a bit dusky, like I need to put a little nasal canula of O2 on her to perk up her oxygenation!  I am really surprised and glad about how much better she looks in photos.

More on Pita later!  She will get her own photo shoot :) 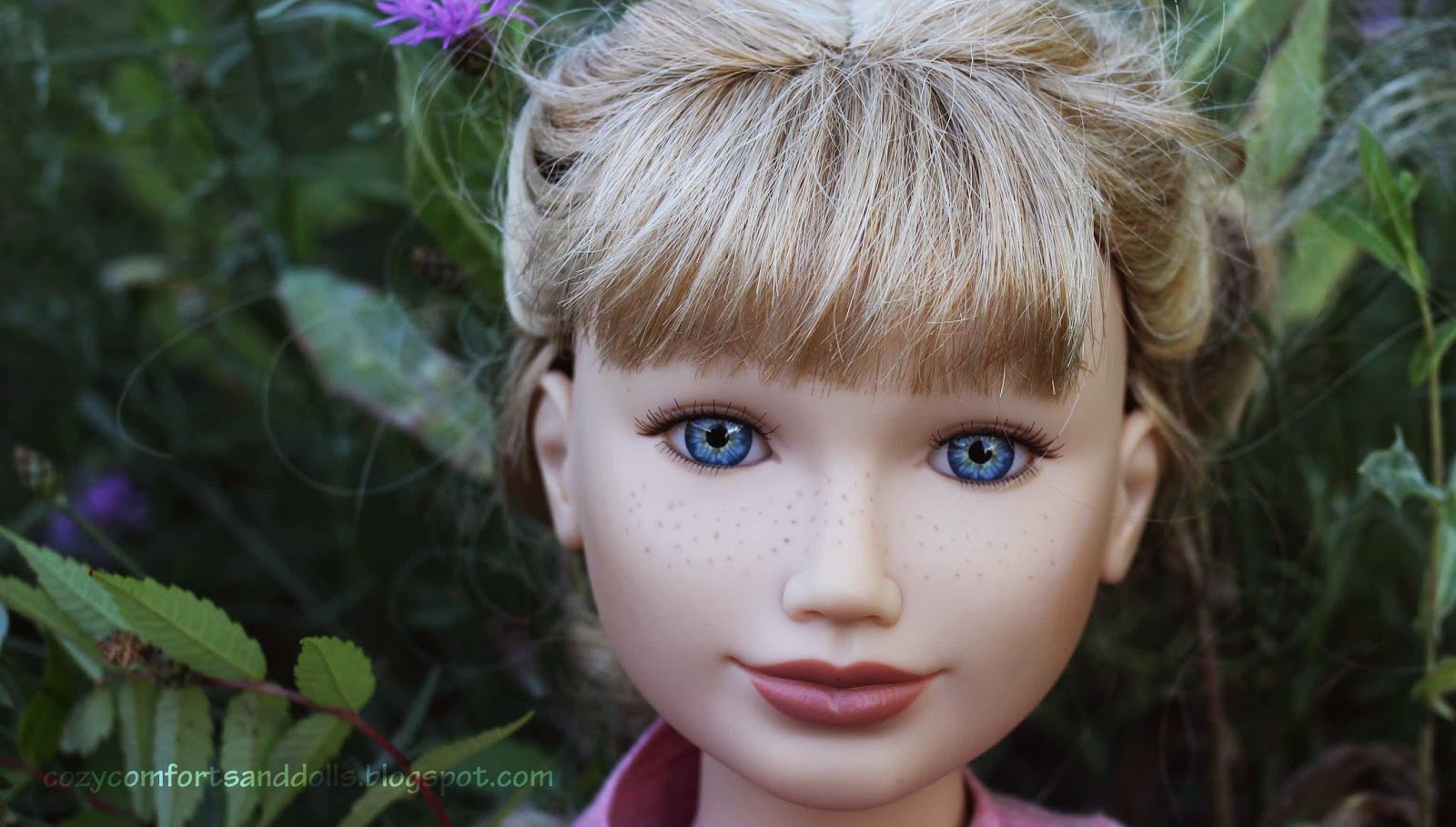 Here's a closer look at Zoey's beautiful face.  She has inset plastic eyes with both painted and soft applied lashes.  Her eyes are so realistic and detailed up close.  The color is quite striking against her fair skin.  She has a splatter of dainty freckles strewn across her cheekbones and bridge of her nose, which definitely adds charm to this girl.
Her lips are painted a very natural rosy pink and she has lovely detailed lines and a cute little cupid's bow shape to the top lip.  I think the distinct line down the middle of her lower lip is very endearing and I love that attention of detail and sculpting that was put into this doll's facial features.

She has such a calm, serene look to her. 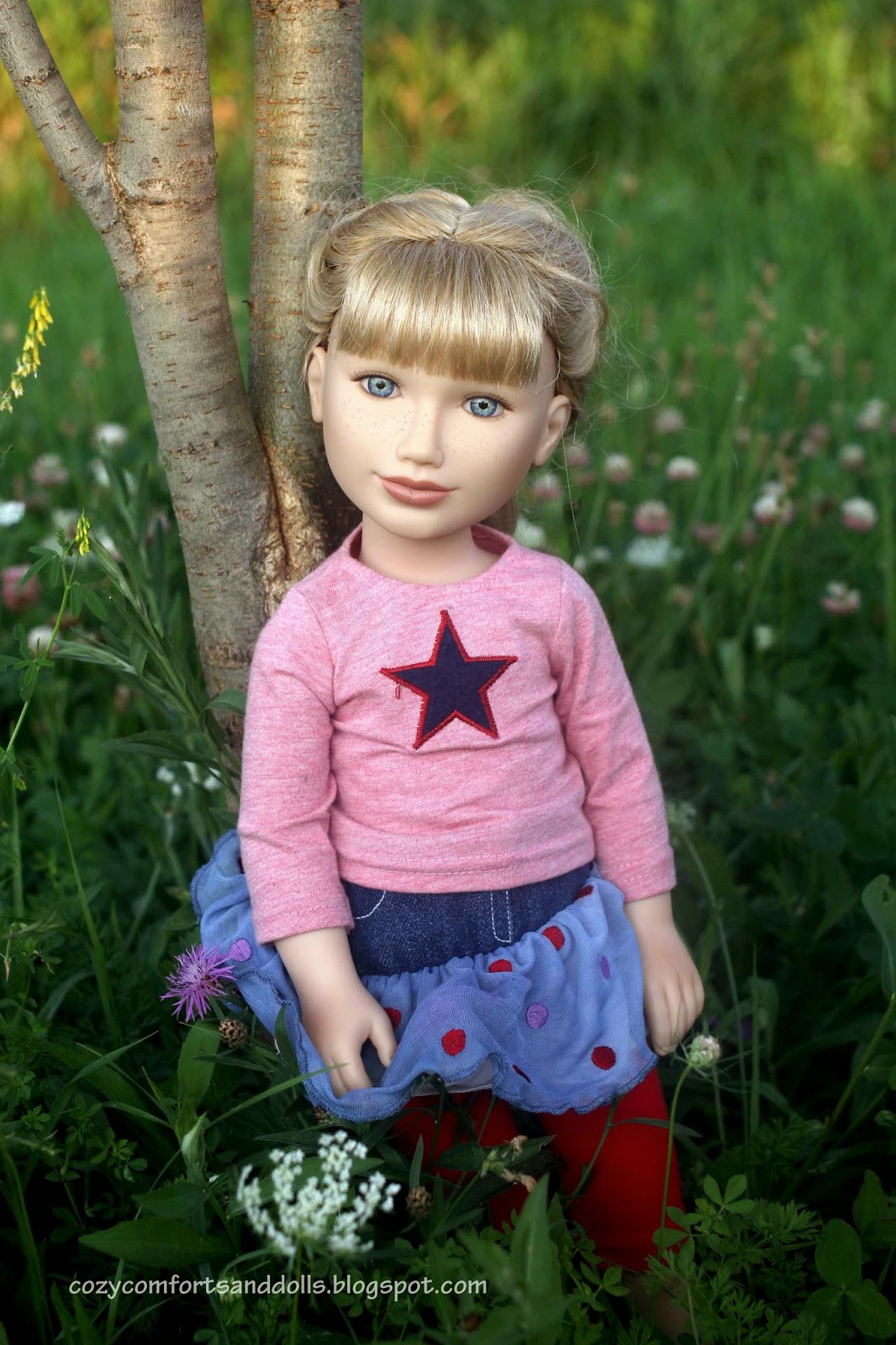 Don't forget to check me for ticks! 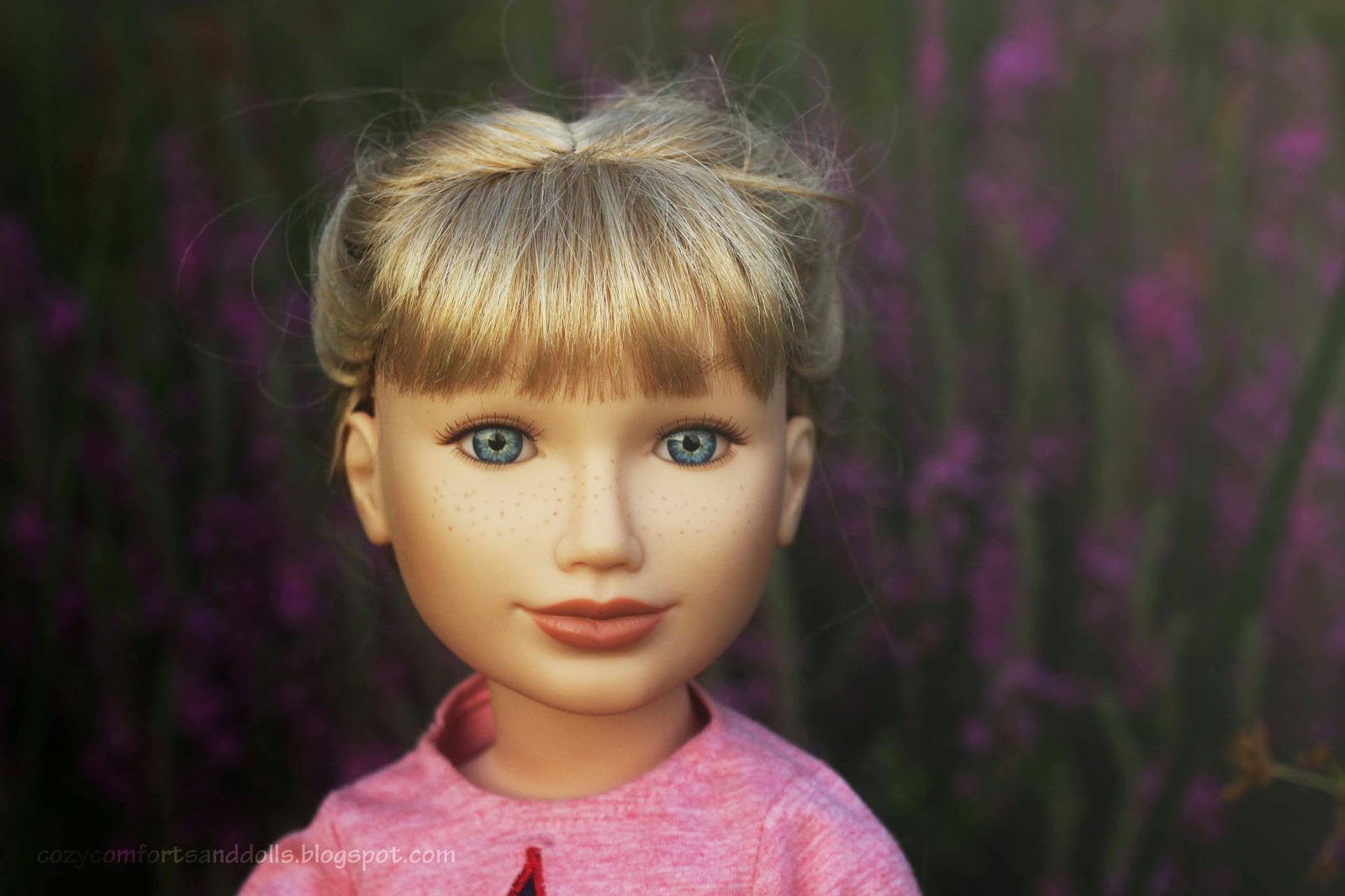 She is a dream to photograph. 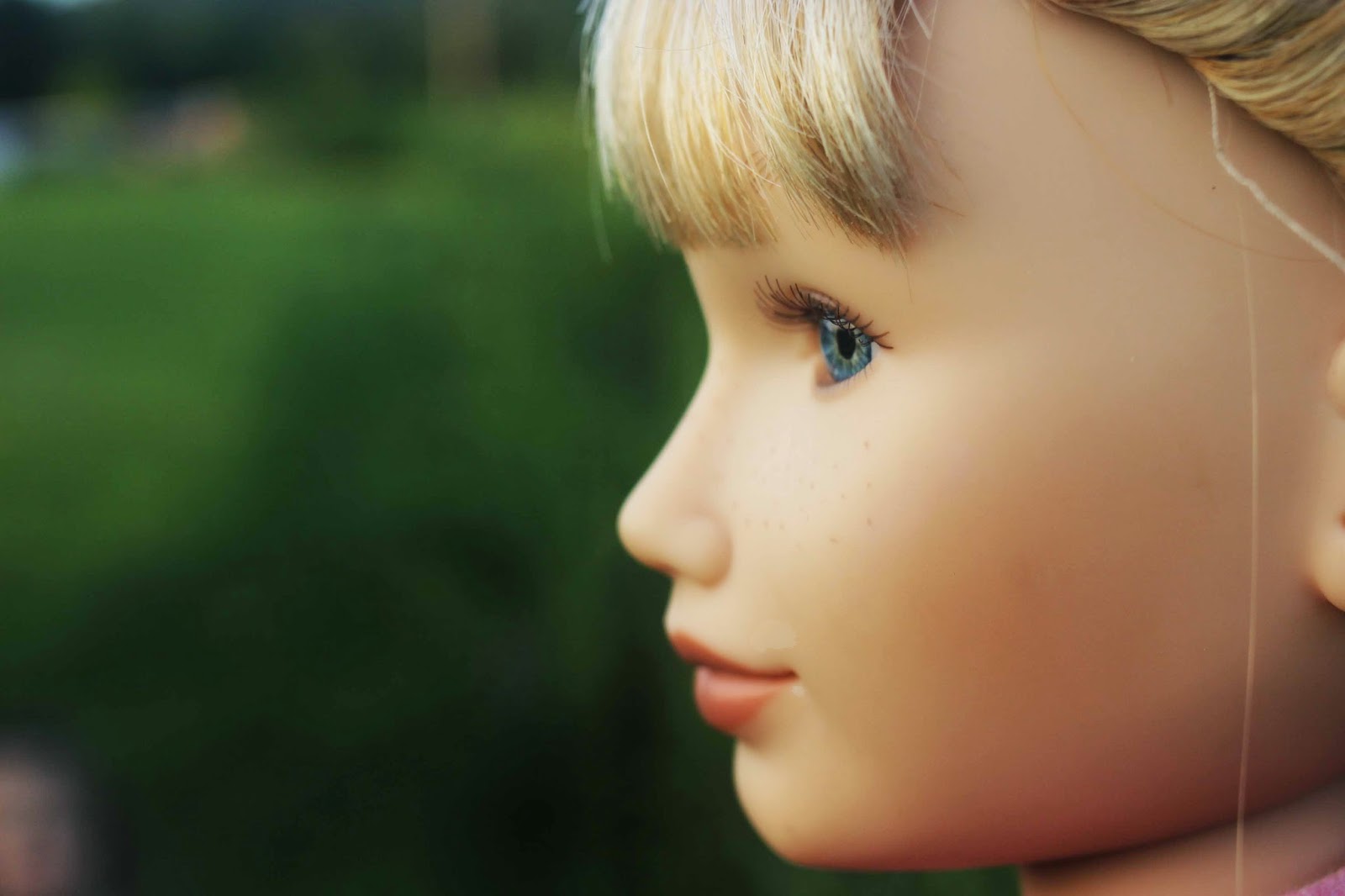 Her nose is dainty, but long and straight.  A nice change from the tiny little celestial button shape noses you find on a lot of dolls. I like a good prominent nose. 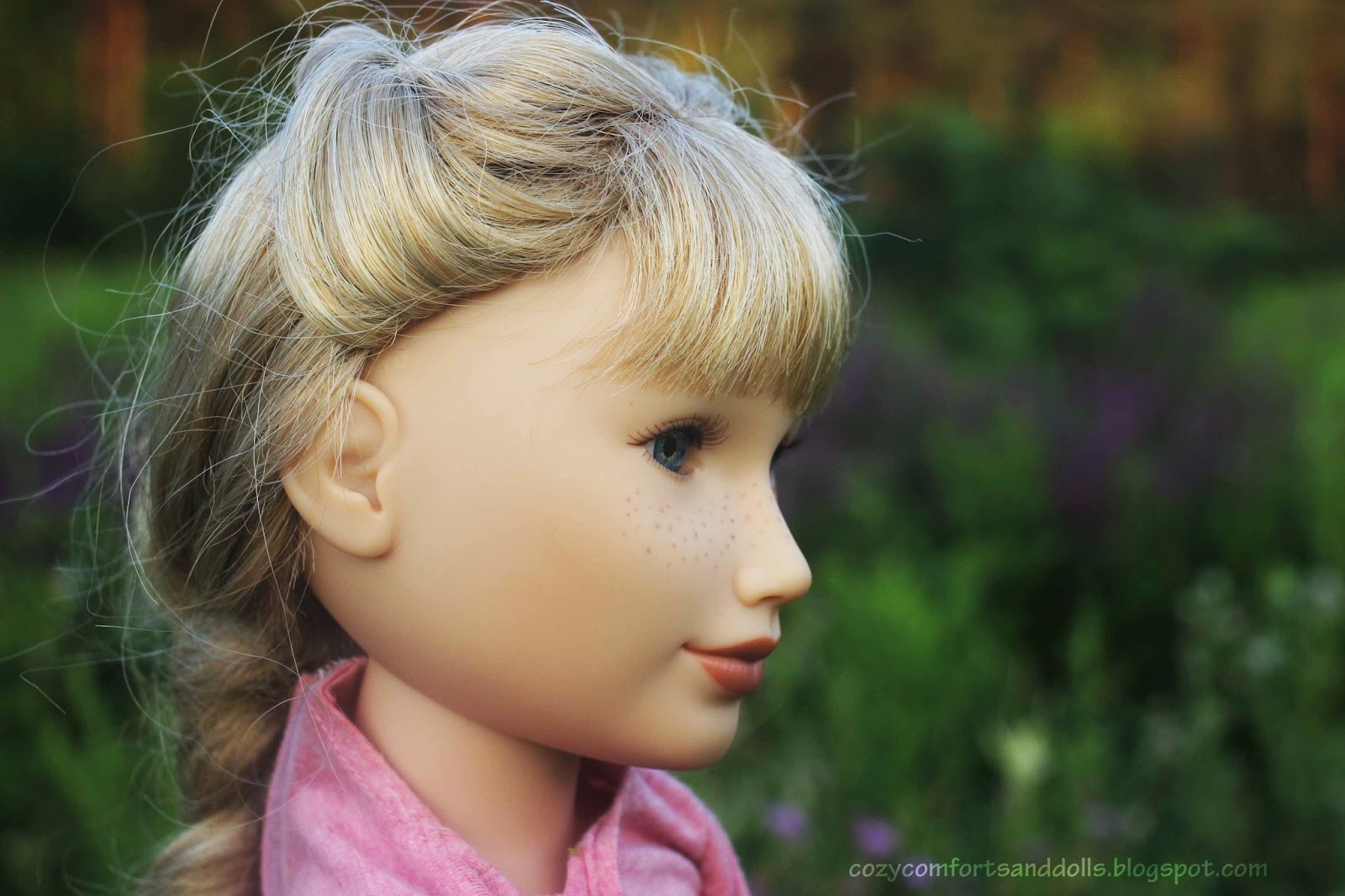 I think they did a great job with the actual ear sculpt.  Looks like a pretty authentic ear. 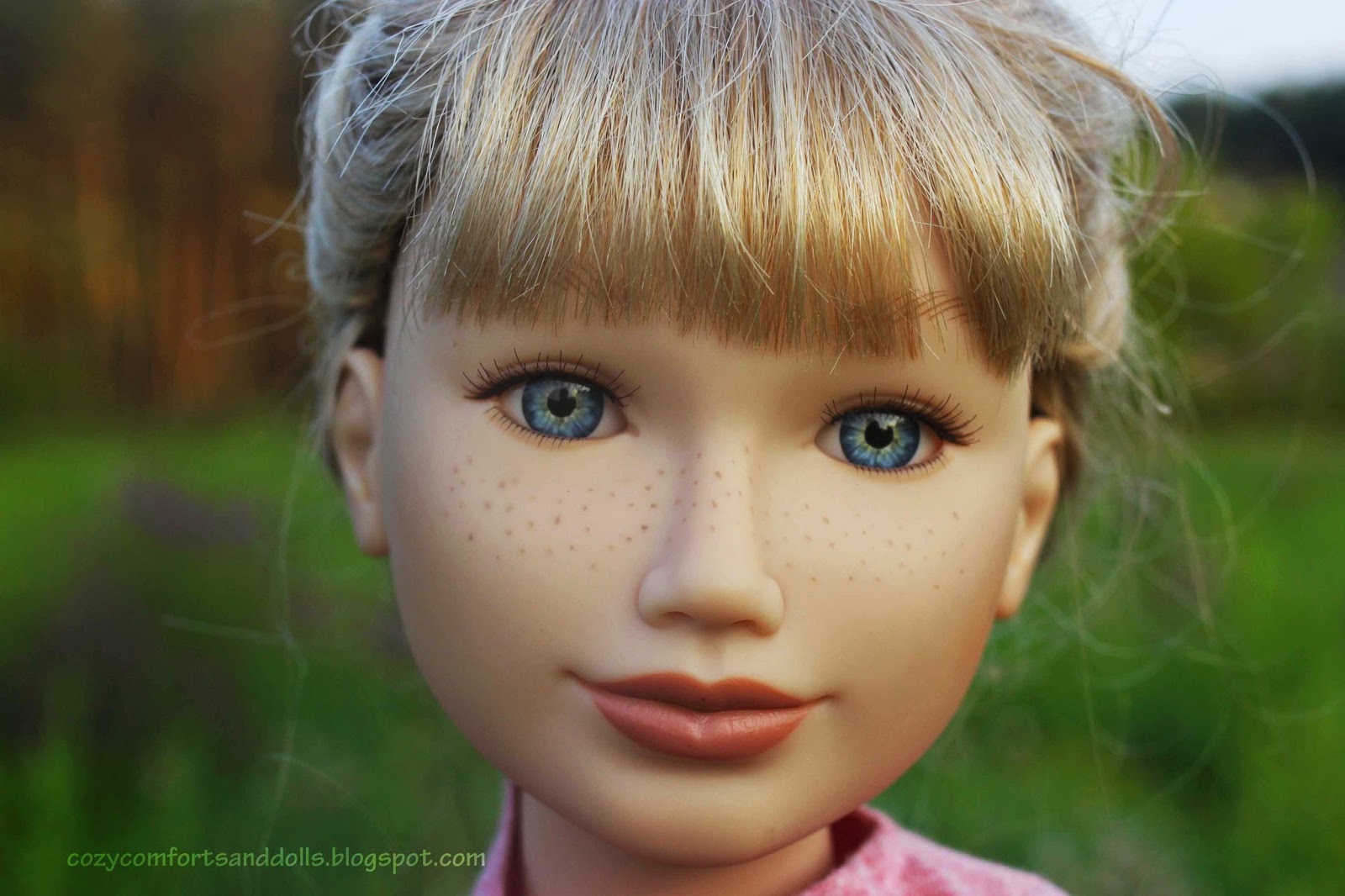 Here's a closer look at her incredible eyes. 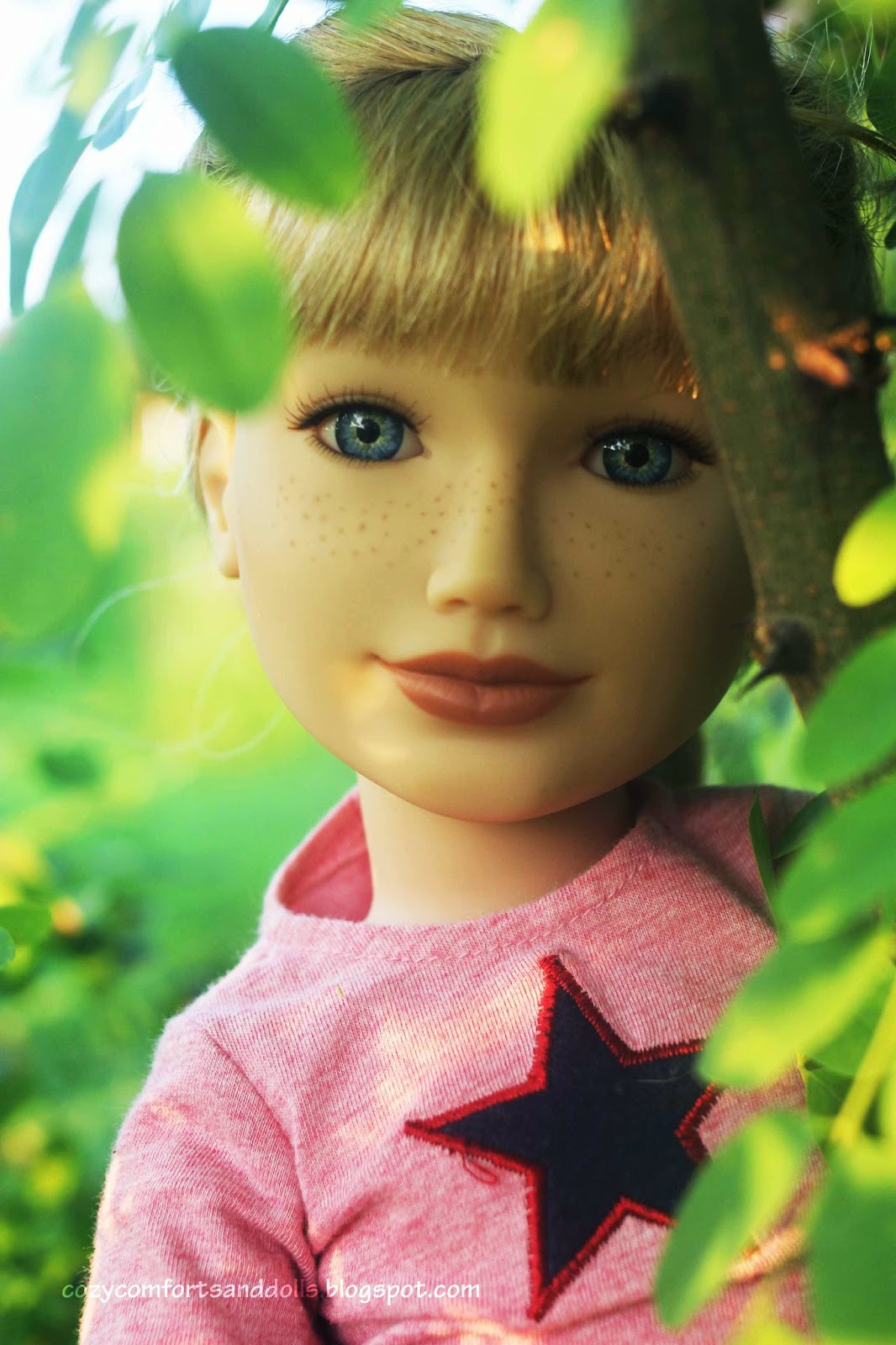 We actually call our particular Zoey by a different name.  Her features remind me of a little Swedish girl so I've name her Ingrid.  Zoey from NYC just isn't cutting it for me as I don't think it is unique enough for this adorable doll.  I have always been in love with Scandinavian culture and landscape so I thought this was a bit more fitting.  I am hoping to either make or find some more authentic Scandinavian clothes for her in the future :)

I hope you all enjoyed my review of the Karito Kids Zoey doll.  I really hope to add a few more to my collection in the future.  I especially love Gia and Lulu-her face is stunning!
These girls are floating around here and there on Ebay...sometimes you can find pretty good deals on used
dolls, so keep your eyes open if you are interested.

Pumpkin Pie was completely in awe of this doll when I first showed it to her.  She kept saying over and over "Mommy, she's so special, so special."  I couldn't agree more!
Have a good night, you all :)