Hi everyone!  I hope all is well in your neck of the woods.  Today I have a quick review of the Disney Store Classic 10 inch Pirate Fairy, Zarina.
I love her! 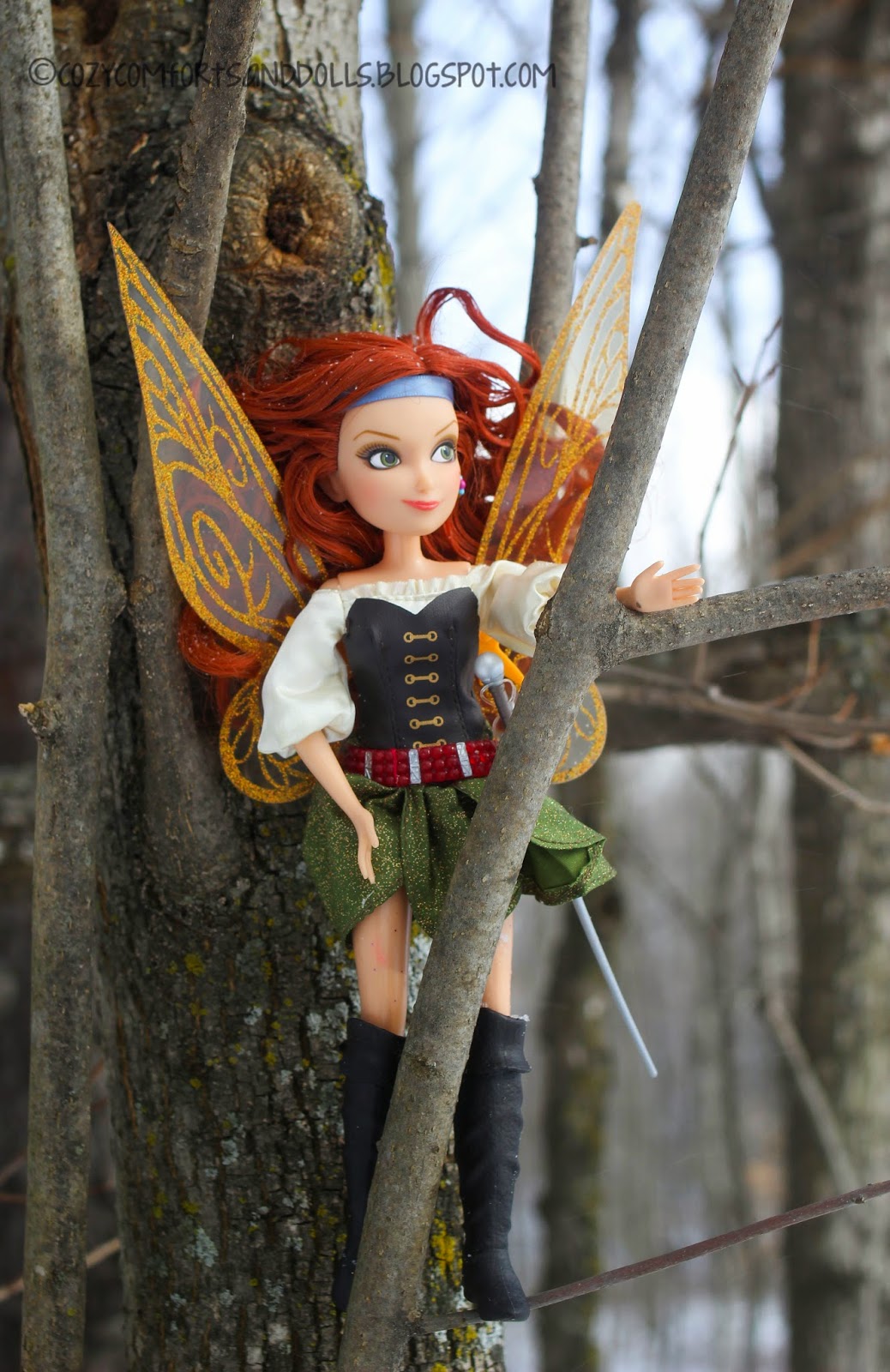 Zaria is one of the new fairies introduced in the 6th Disney Fairy movie- Tinker Bell and The Pirate Fairy.  She is a pixie-dust keeper fairy who ironically always run out of pixie dust. She later discovers blue pixie dust and ends up teaming up with a deceiving and young Captian Hook after feeling outcast by the other fairies in Pixie Hollow.  Tink and the others end up finding her and helping her make things right again.

My girls loved it-especially Pumpkin Pie and she really loved Zarina.  Lucky for her, Santa brought her one for Christmas and she was kind enough to let me borrow her for a quick review. 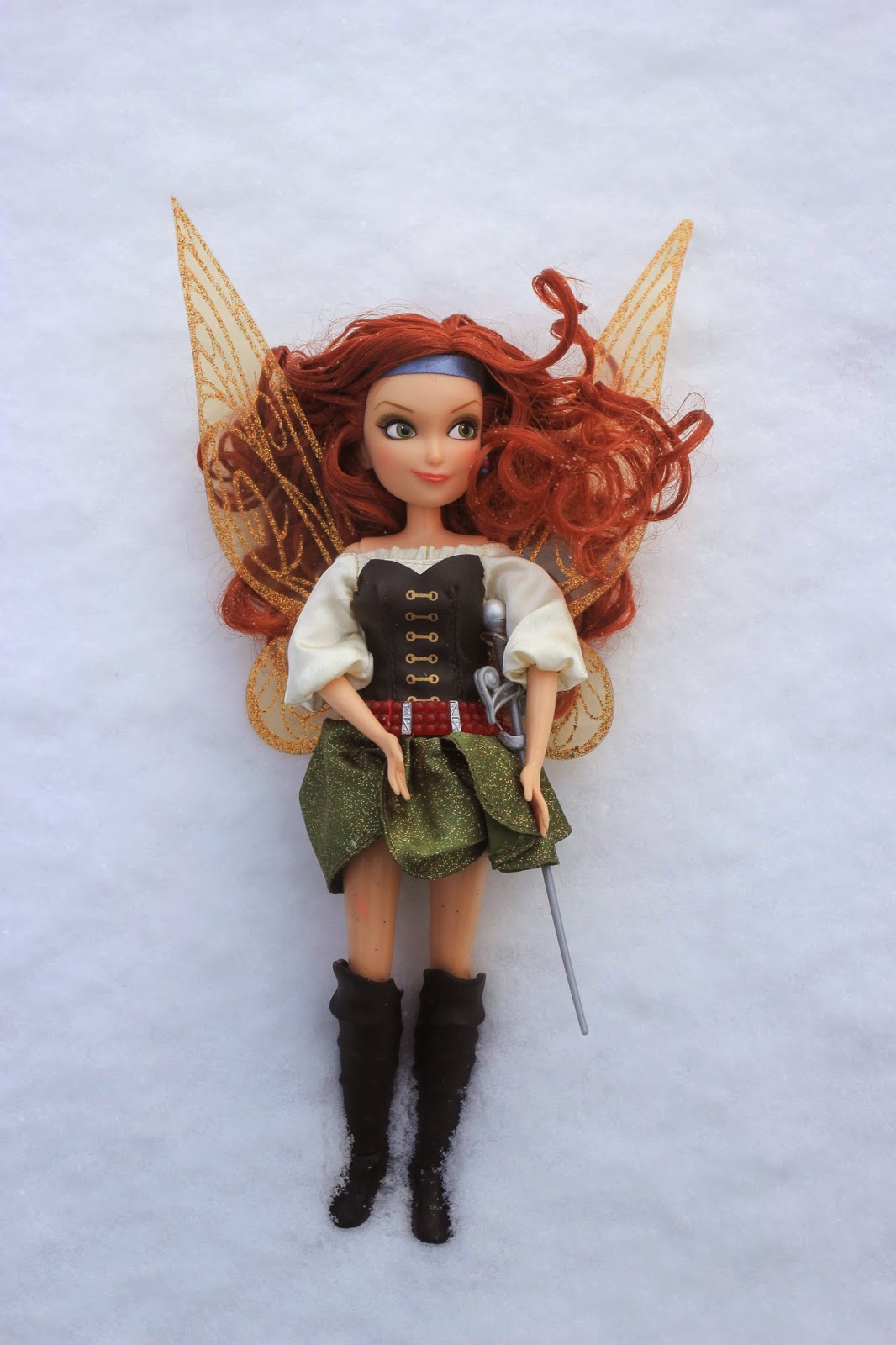 Since she was a Christmas gift, I didn't get a photo of her in the box as she came out of the box immediately after Pumpkin Pie opened her, but the box was pretty similar to most of the other Disney Classic dolls.
I just love her wild curly hair!  Very Merida.  Not quite movie accurate, but pretty nonetheless. 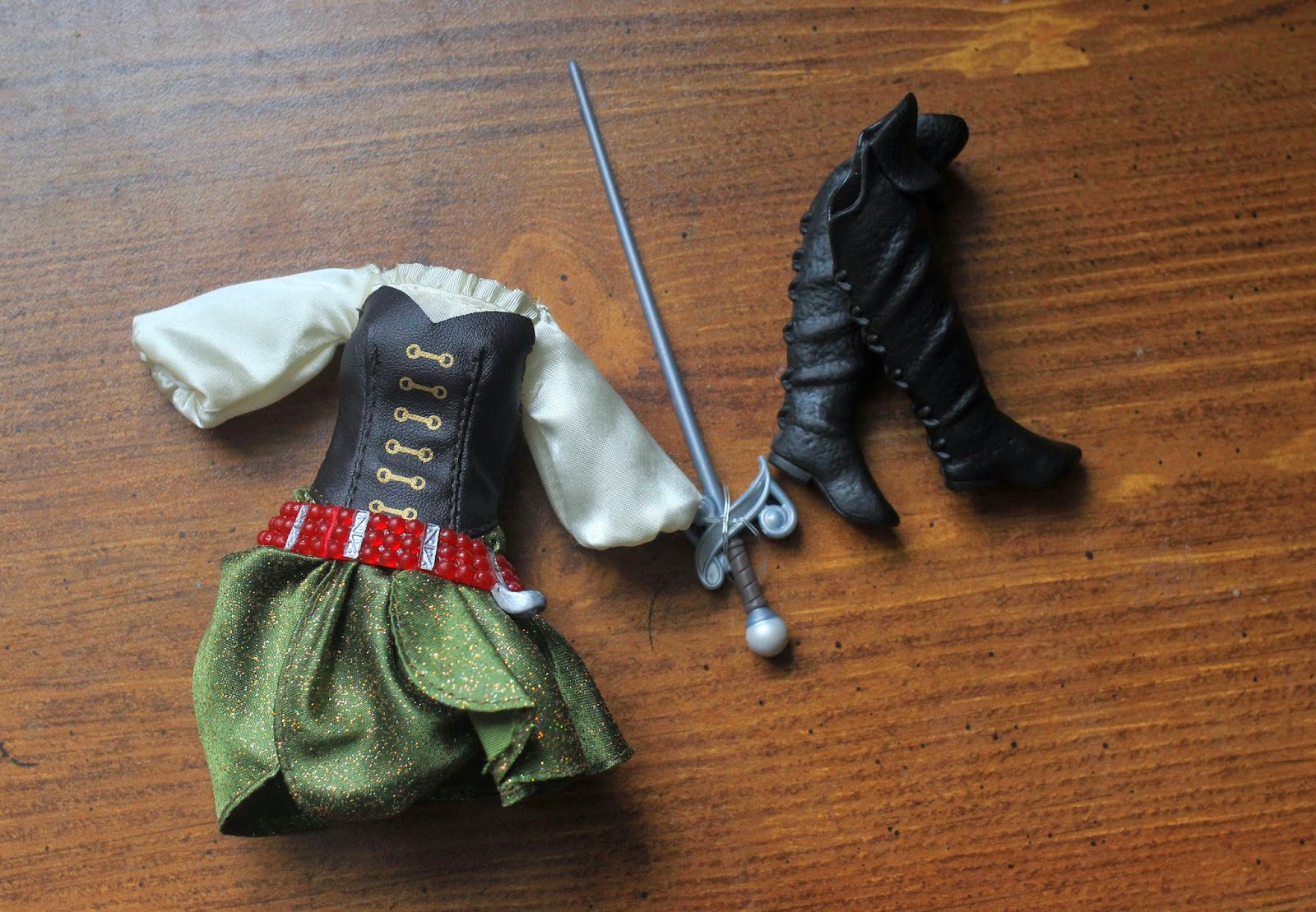 Zarina comes w/ a dress, pirate boots and a sword.  The sword fits into a little "metal" loop-like sheath attached to her red bubble-beaded belt.  The belt unsnaps in the back, but is attached to her dress in two different places. Her dress is all one piece with velcro in the back and is actually really accurate to her movie character which you can see below. 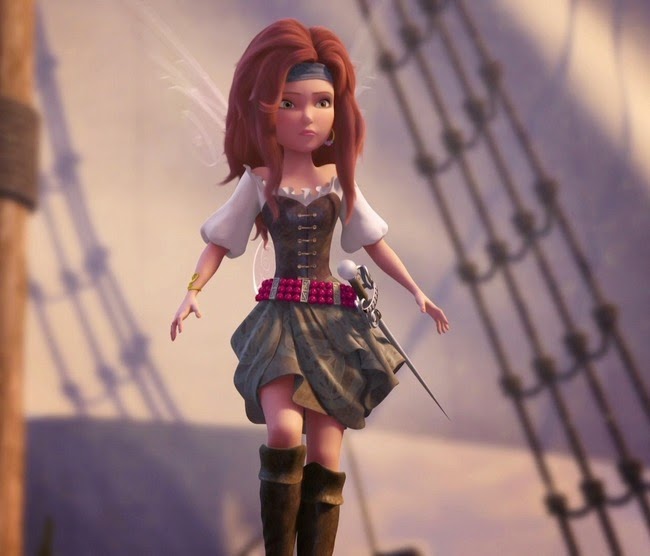 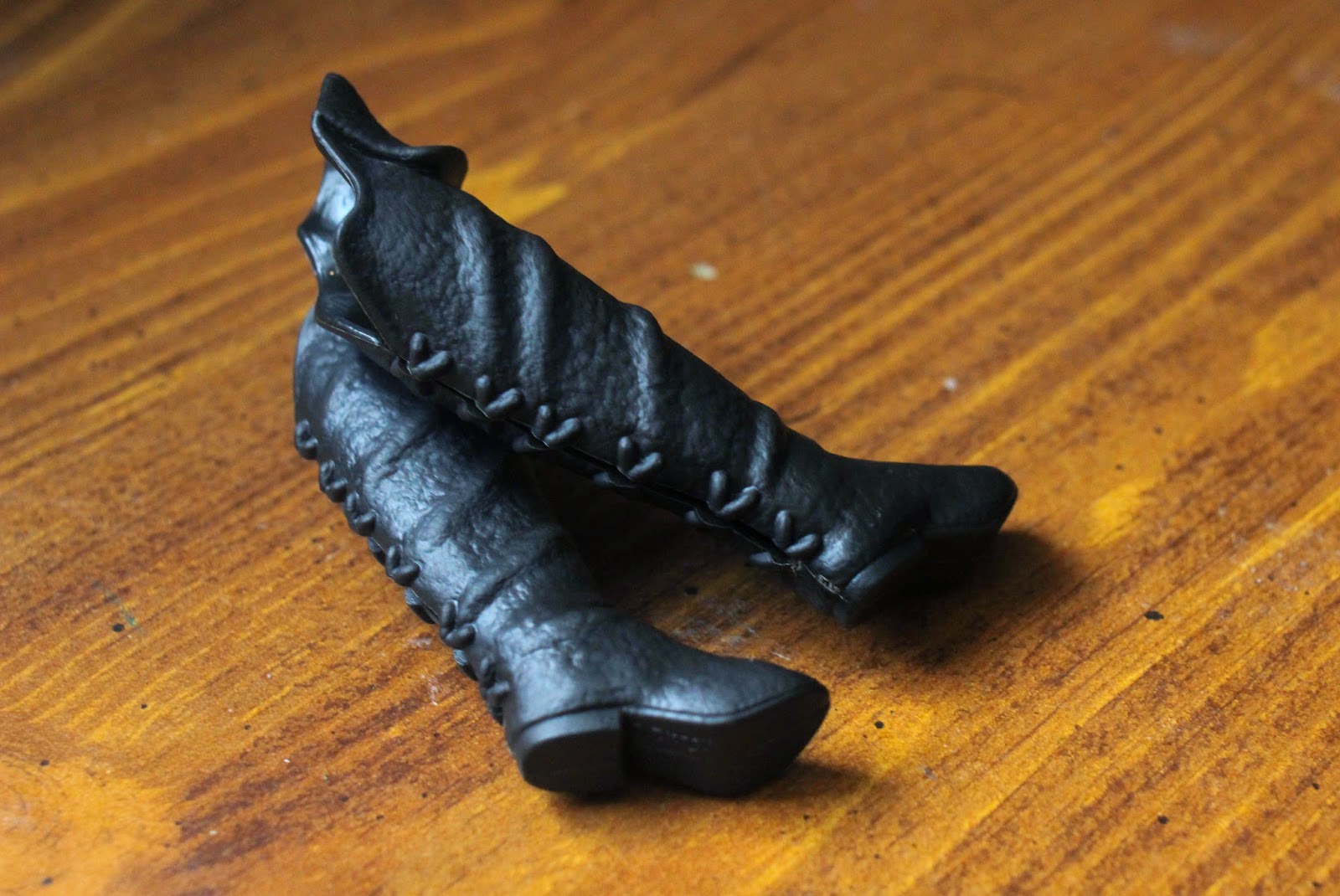 Her boots are knee high "swashbuckling" boots with a nice stitched up detail in the back.  The plastic is molded to resemble slouching and movement in the boot.  There's a defined seam where the sole and heel are attached to the sides and top of the boot and I love this little detail! 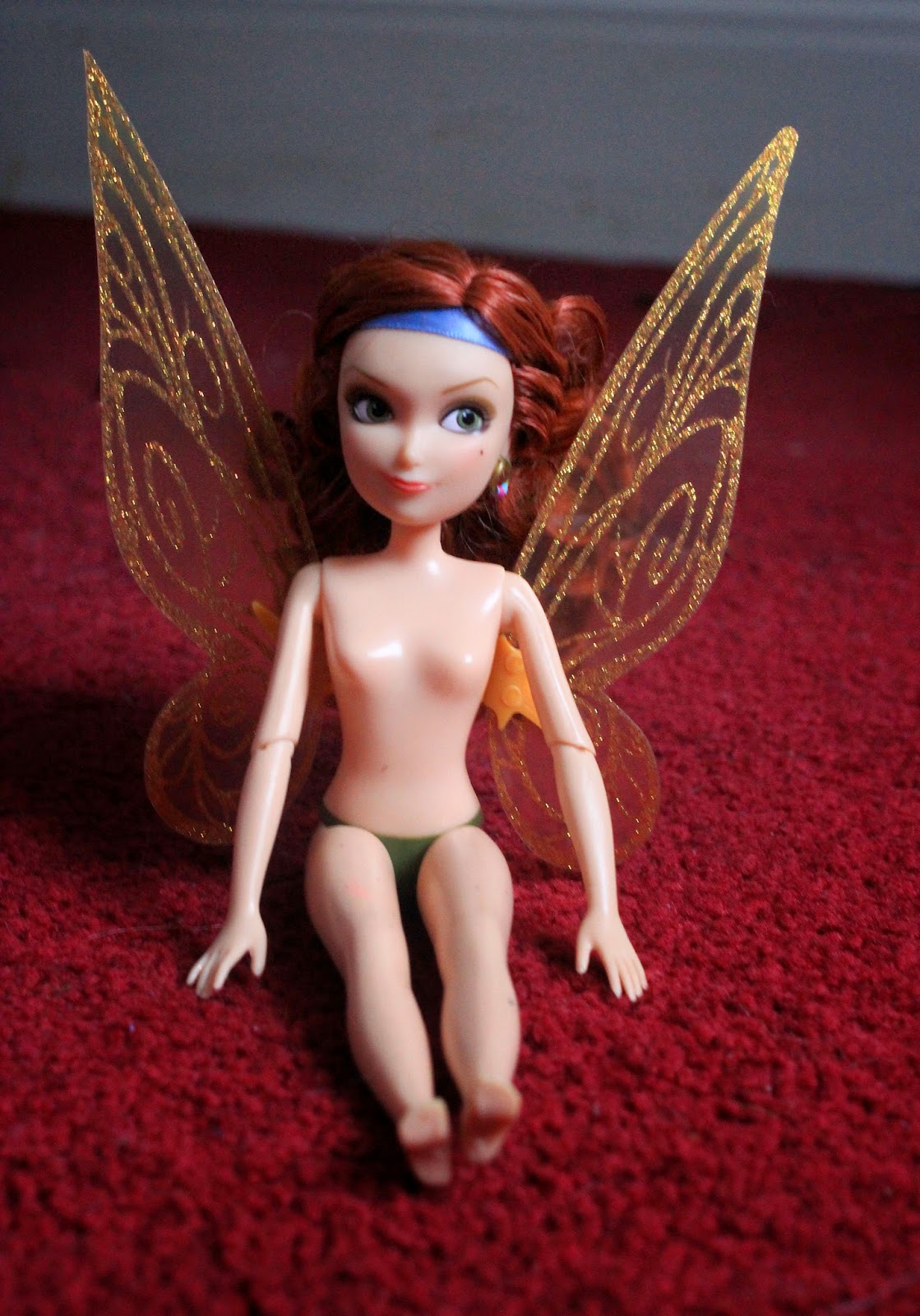 In the movie, Zarina's wings are translucent like the rest of the fairies, but her doll version has gold glitter outlining the lines in her wings.  The wings are attached to her back as you can see below.  If you press the button in the middle of her back, her wings flutter back and forth.  It's actually a really cute effect.  I don't think they come off and to be honest, I didn't really try to remove them. 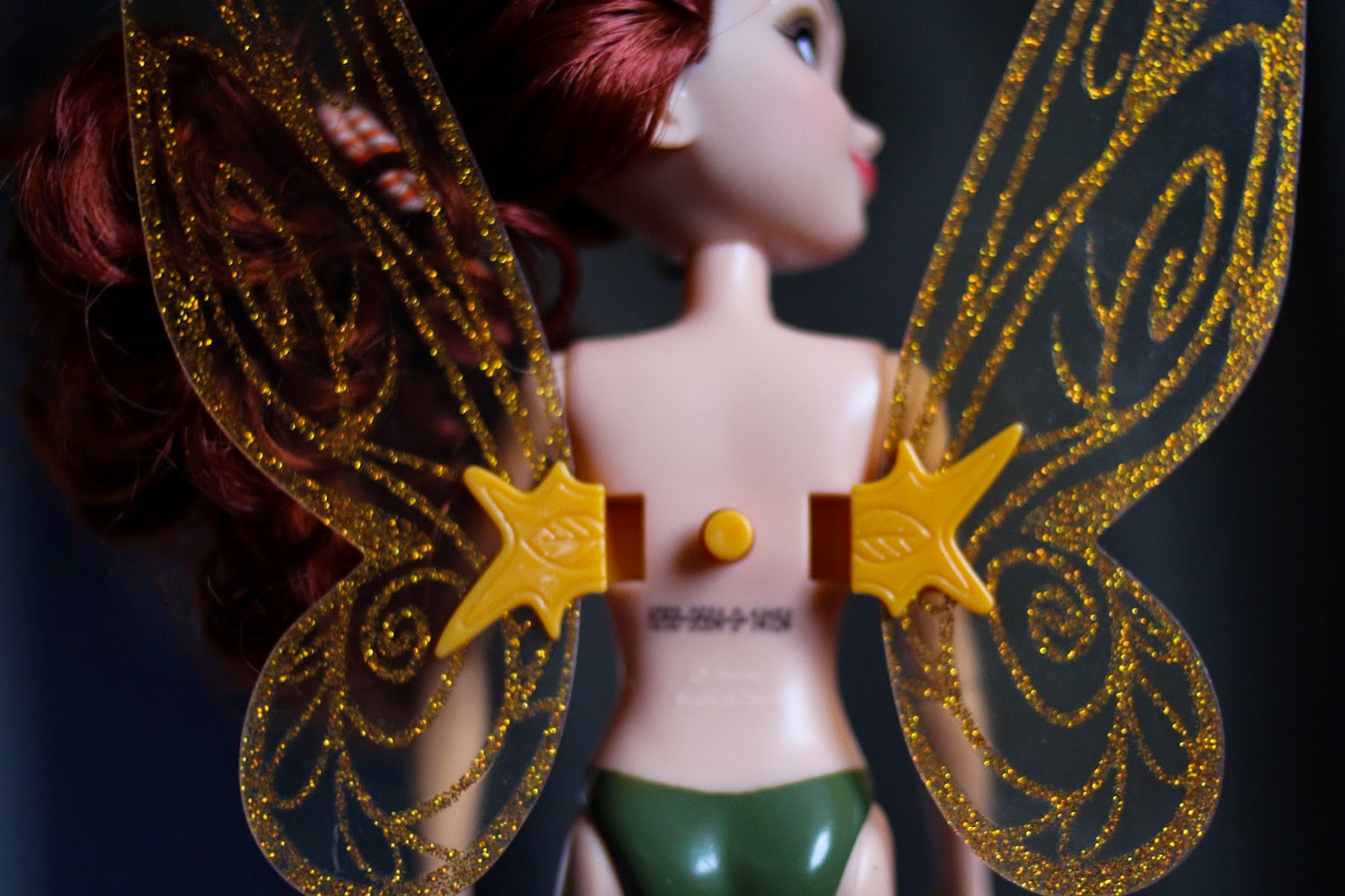 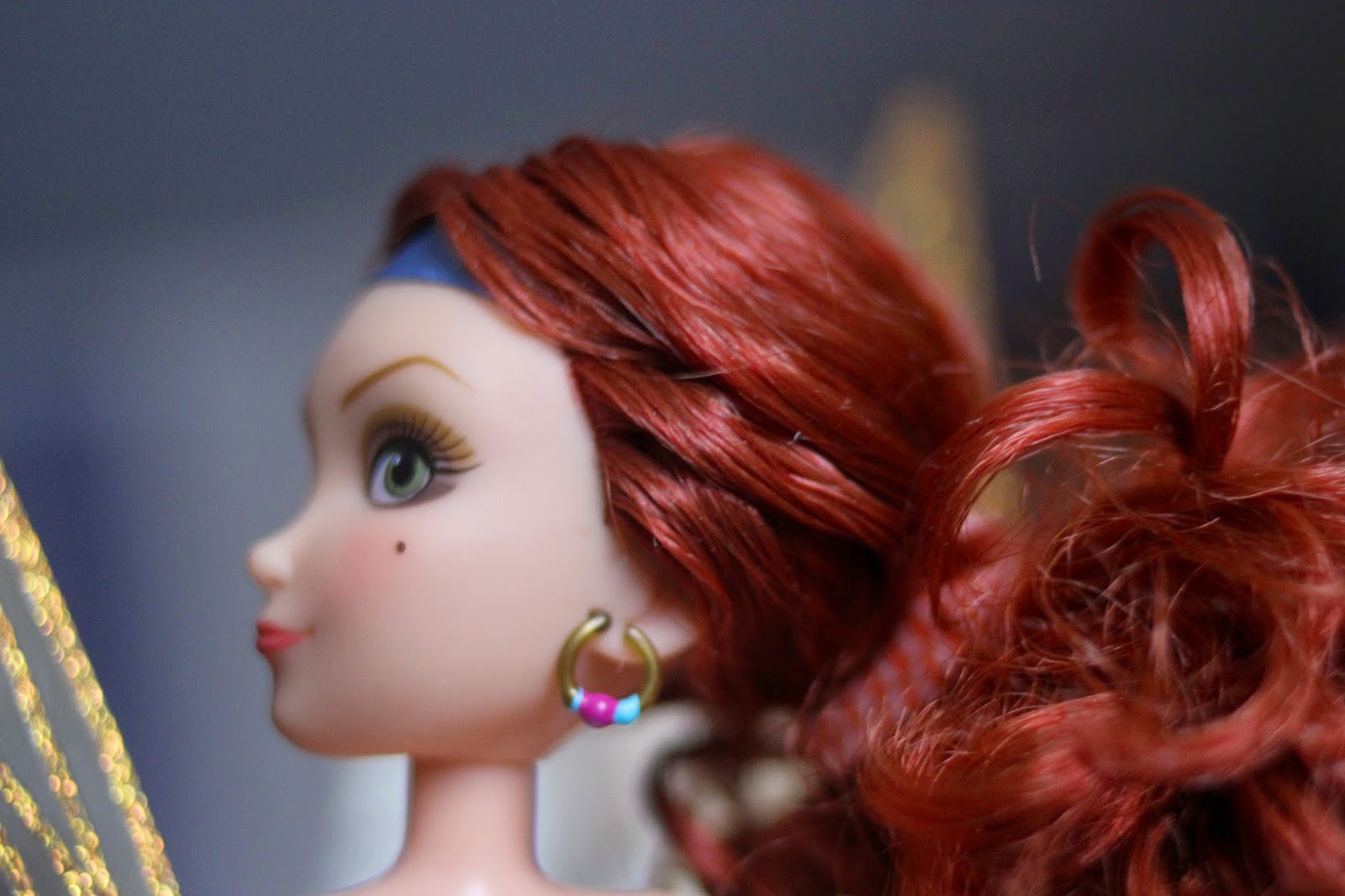 As for jewelry, she only comes with one hoop earring in her left ear.  The way it is pierced on the doll, makes it look like a tragus piercing, which is pretty adventurous of Disney. ;)

In the movie, it looks like it's a regular earlobe piercing. 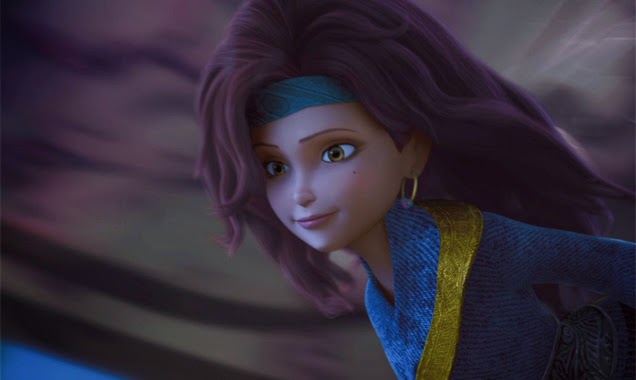 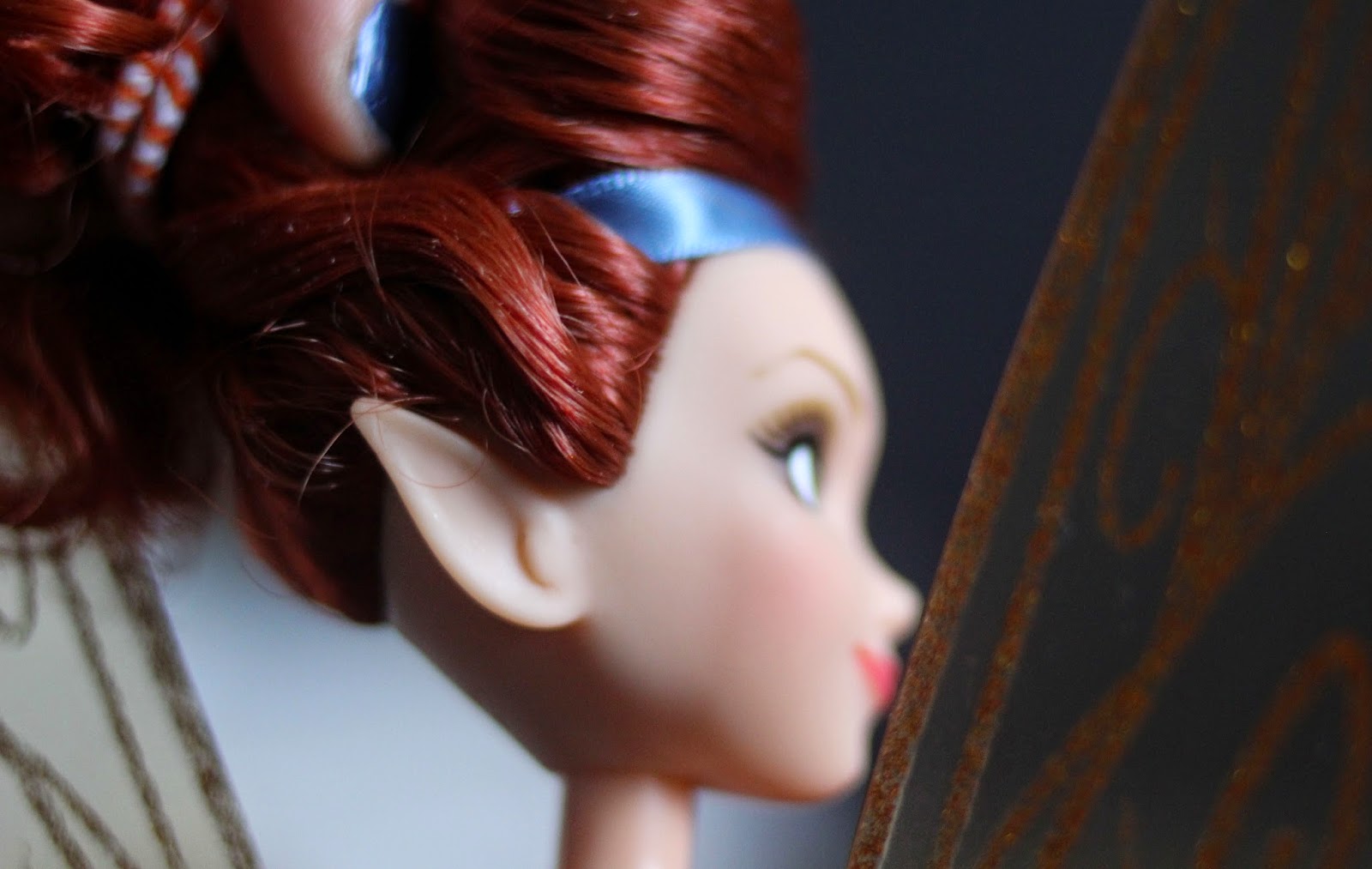 Look at those cute ears!

Her face.  They went all out "sas" for this face mold.  I tried to find a movie still that was somewhat similar and this was the best I could come up with.  She has a really sweet face in the movie, but I think they really seemed to capture her spunky, rebellious side in the doll representation. 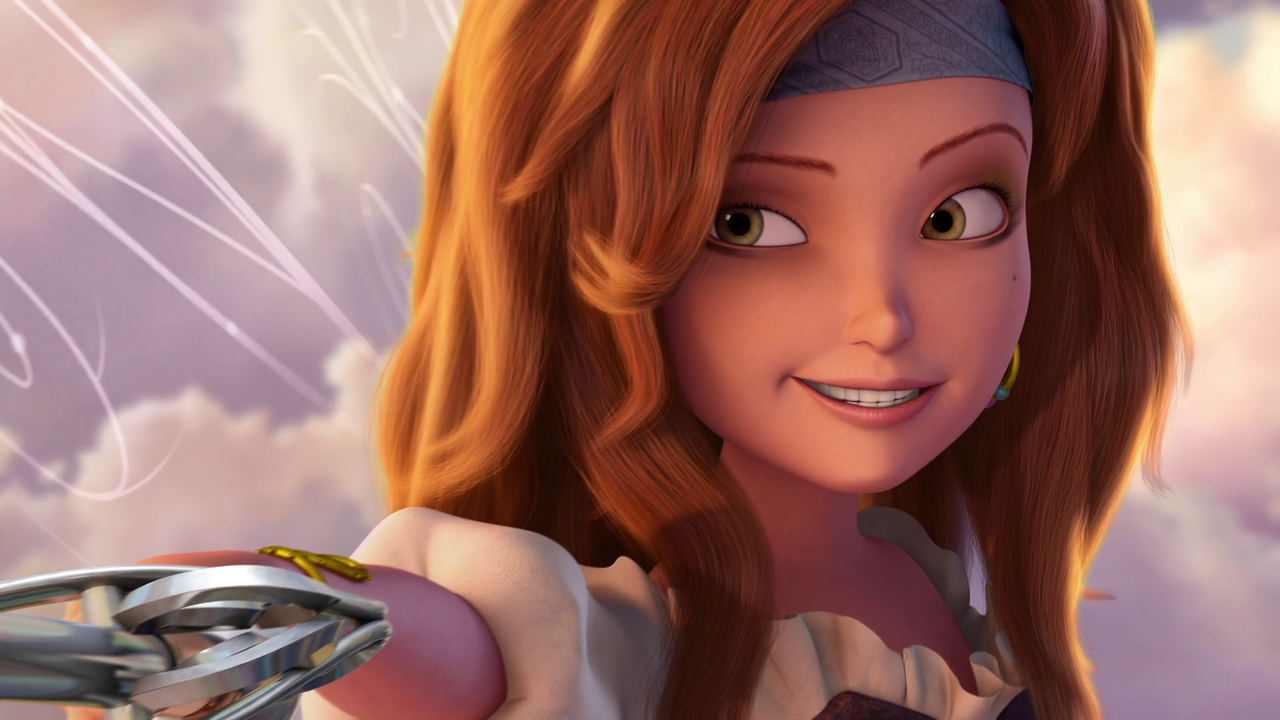 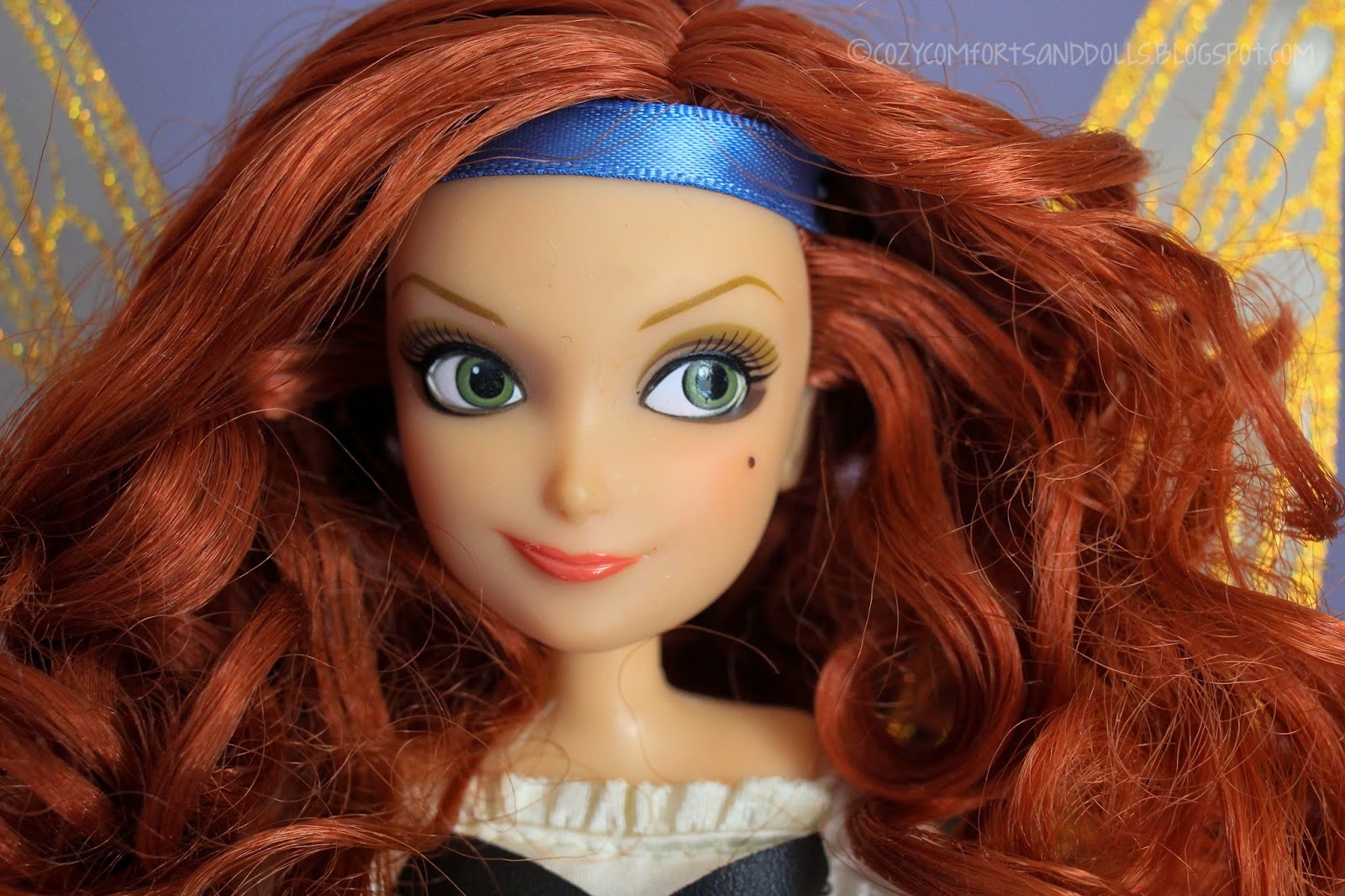 Zarina has mossy green eyes with black liner, brown smokey shadow on the upper lid and lower lash line and painted on upper lashes.  I really like the effect of the white paint on the outer corner of her right eye, which gives it a nice depth.  Her brows are thin and arched and add a lot of personality to her face.

Her checks have a peachy blush and her lips are painted with a shiny coral glaze.  They even included her beauty mark on her left cheekbone.
She is so cute!! 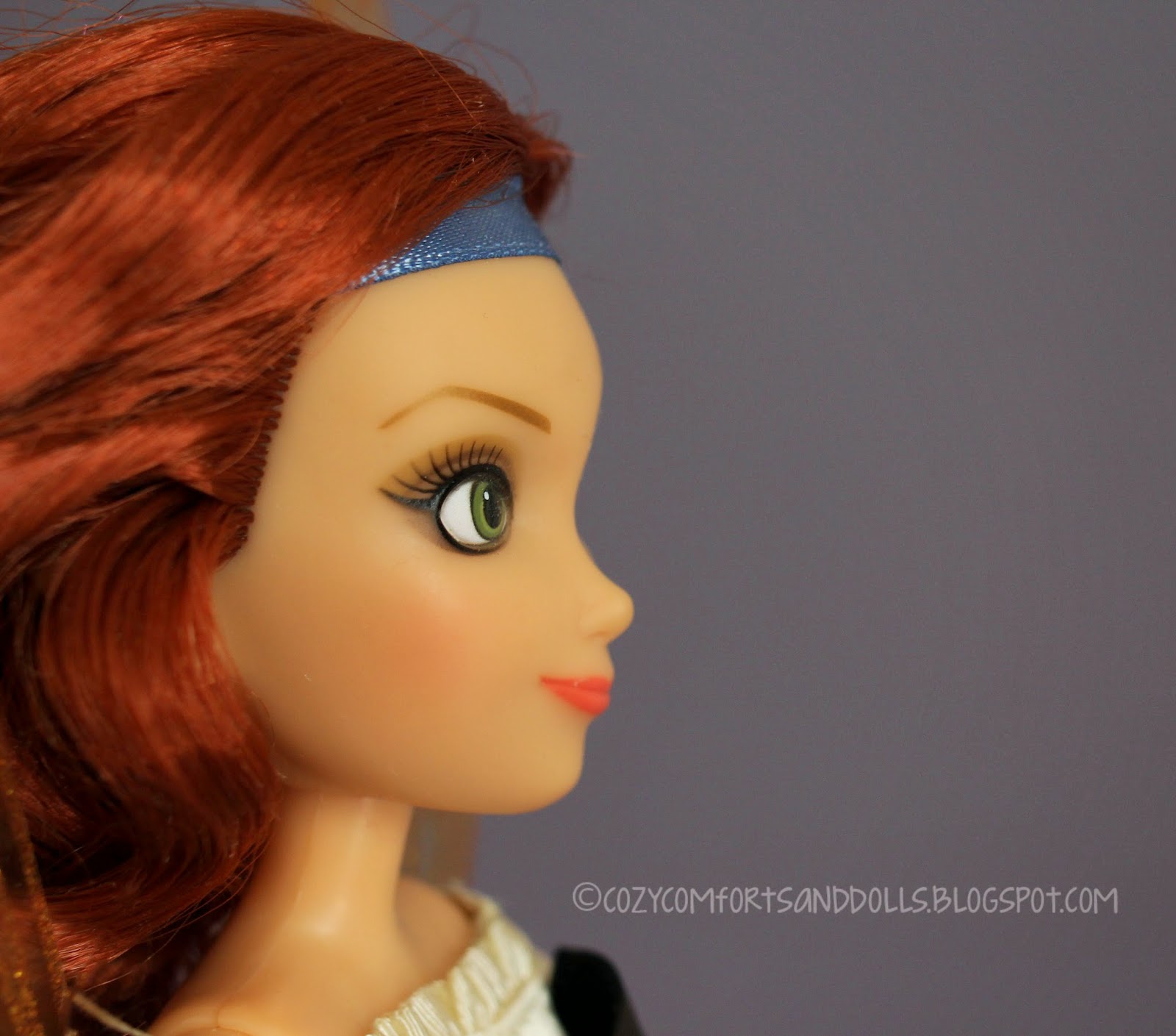 Her profile can't be any cuter either.   I love her rounded forehead, celestial nose and pursed little lips. Very pixie. :)

Her hair is pulled back in the front with a satin blue ribbon which circles around her head separating the top of her hair from the bottom of her head. 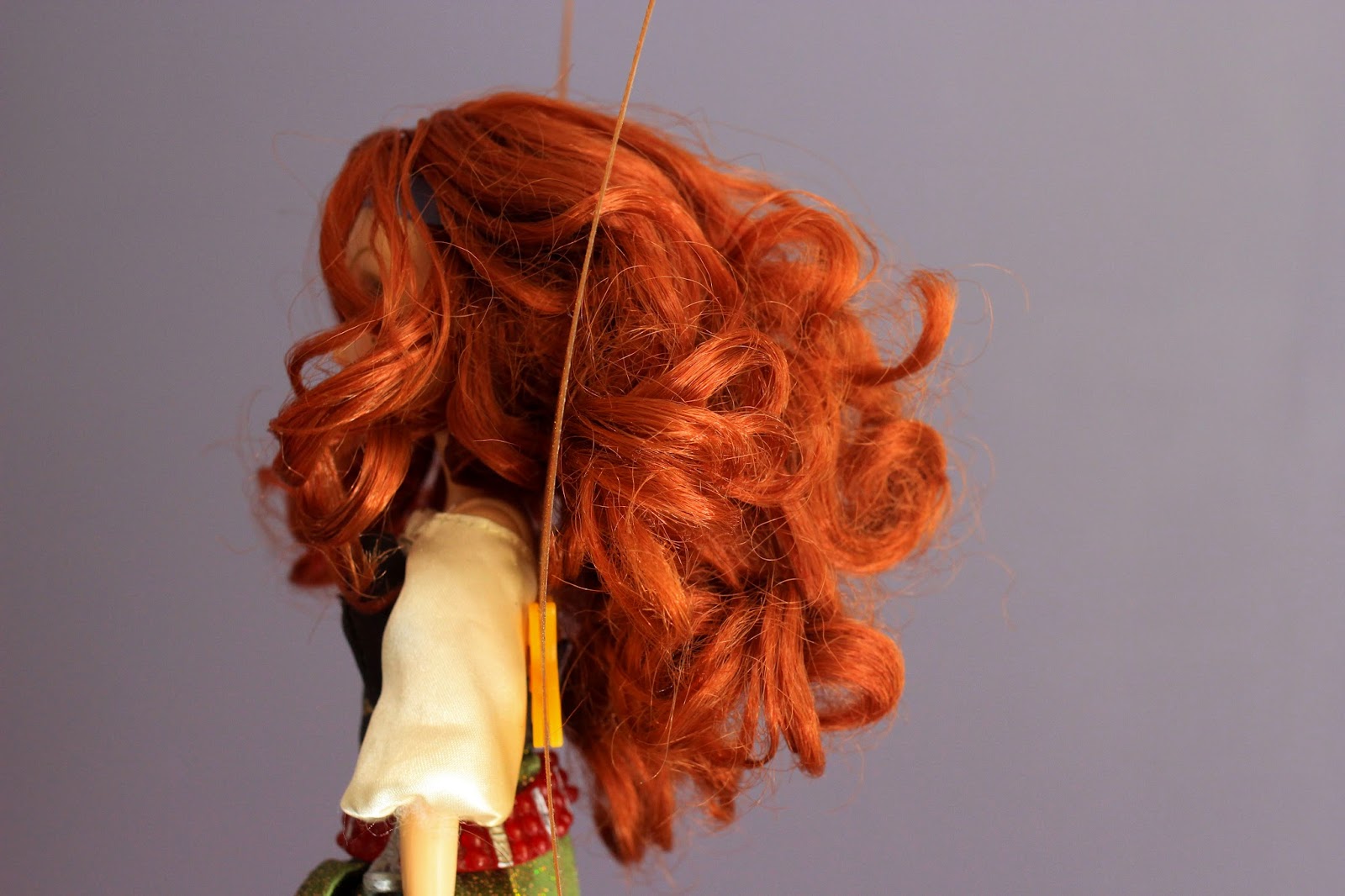 This girl has ALOT of hair.  Obviously, she's been a bit played with a bit, but her hair is a gorgeous coppery auburn and very curly.  It's pretty soft, though, but I wouldn't recommend combing it.  Usually we keep it pulled back in a ponytail and it still looks really cute. 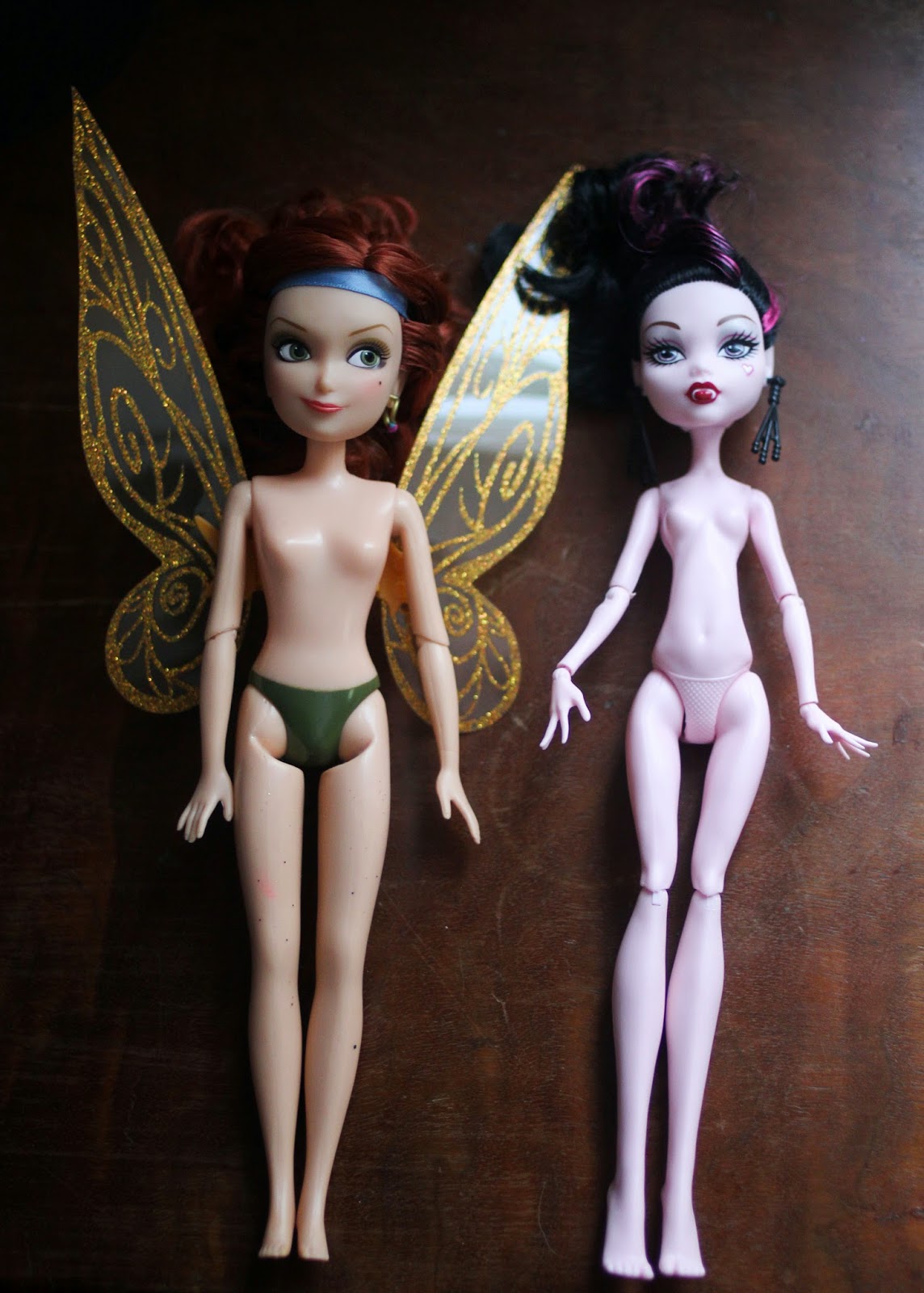 As for her body, she has 9 points of articulation (if you count the knees.)  Unlike Monster High, or even some of the classic Disney Store princess dolls, she does not have extra articulation in her wrists, which is a little bit of a bummer.
She is a tiny bit shorter than Monster High Draculaura, but has a thicker torso and bust as well as a larger head.  She unfortunately can't share clothes with Monster High or Ever High dolls as they would be too tight. 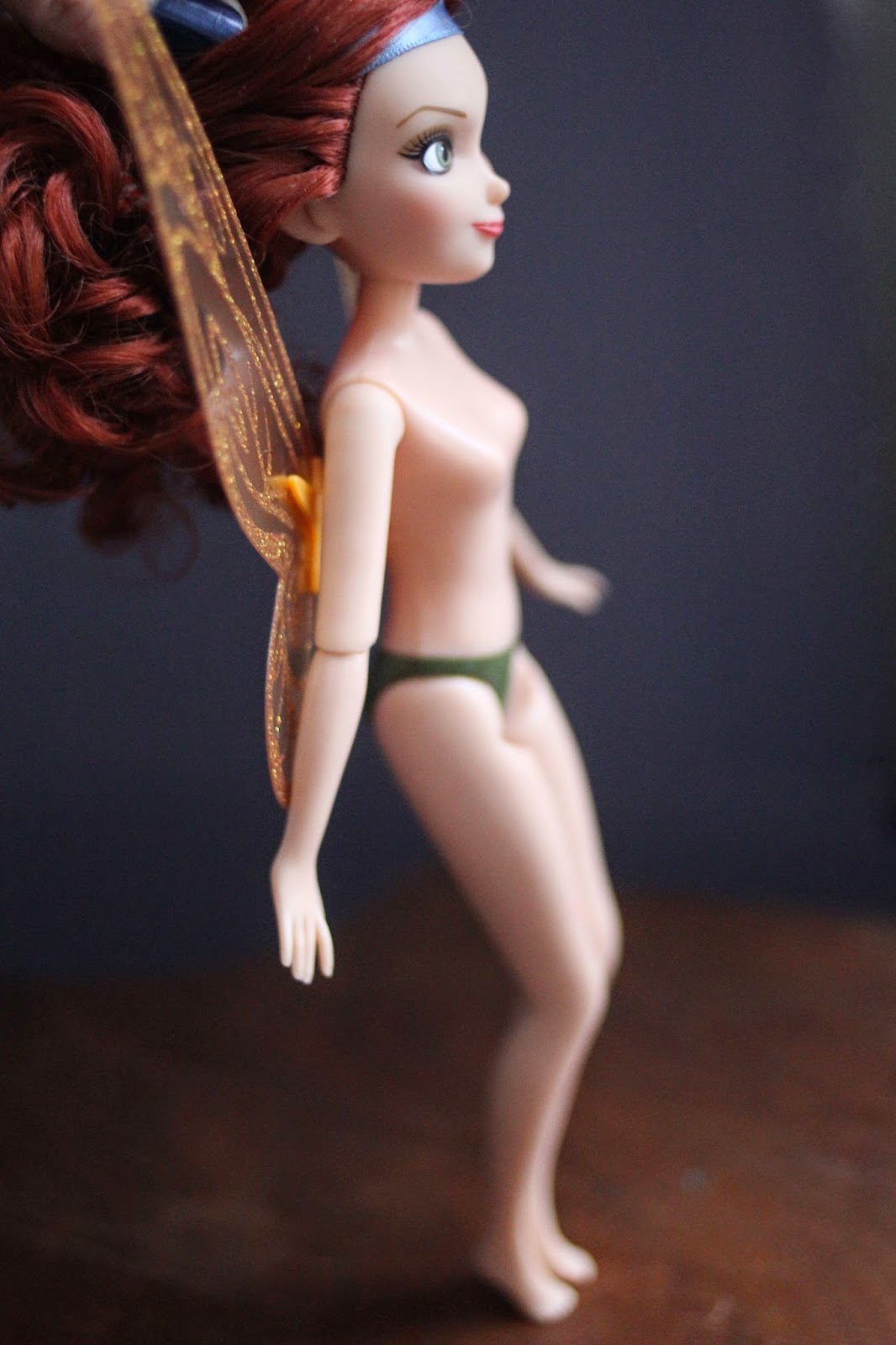 She has the "click knees" as I've heard them so often affectionately (not) called, which only bend about this far.  I've seen some other reviewers experience breakage of knee joints in these types of joints, so I didn't want to push it!  Sorry Pumpkin Pie, Mommy broke your doll! 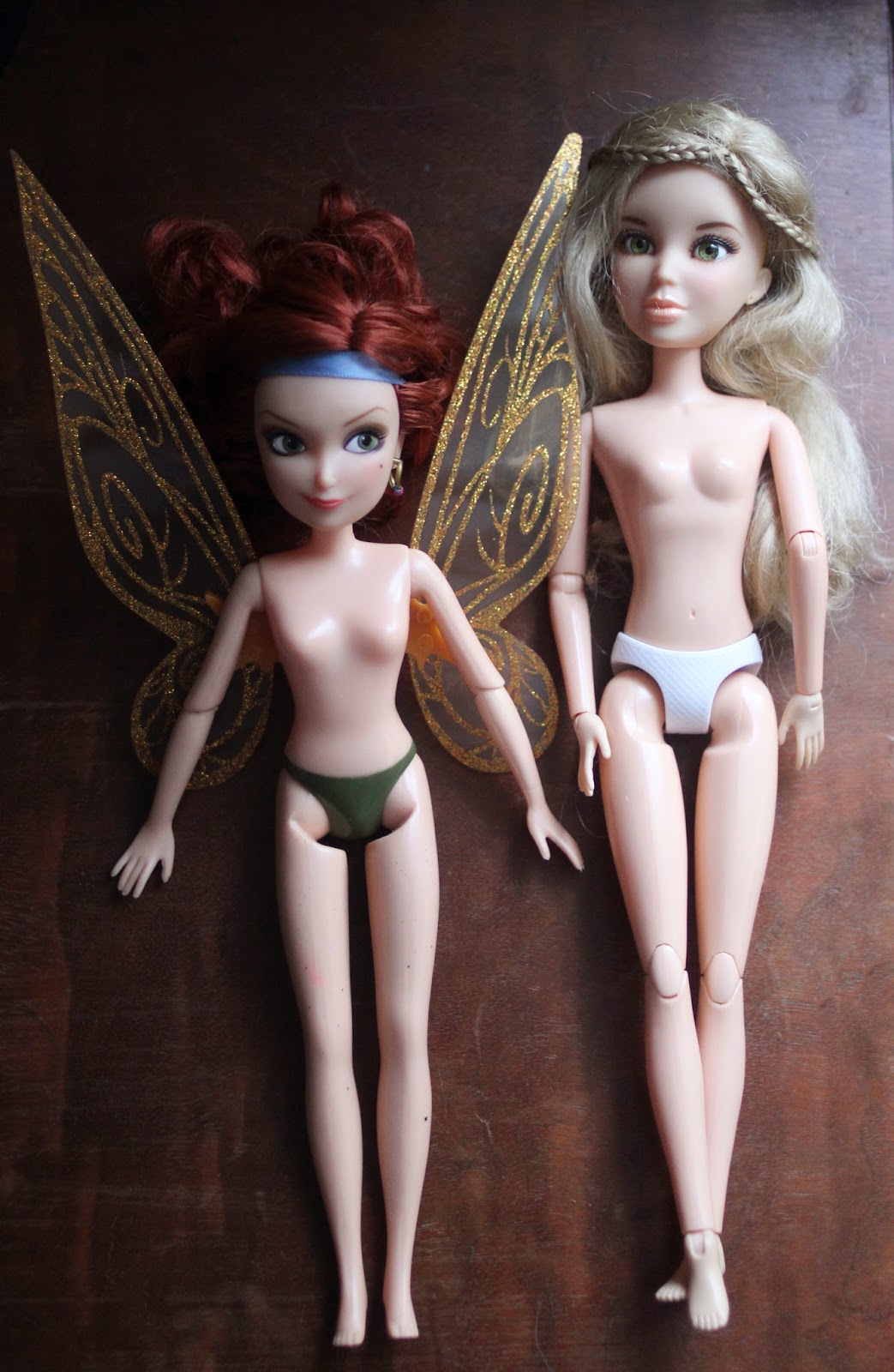 I was surprised to see that she had a similar torso to our old friend Hayden (Liv doll.)
I was hopeful that she could share clothes with her. 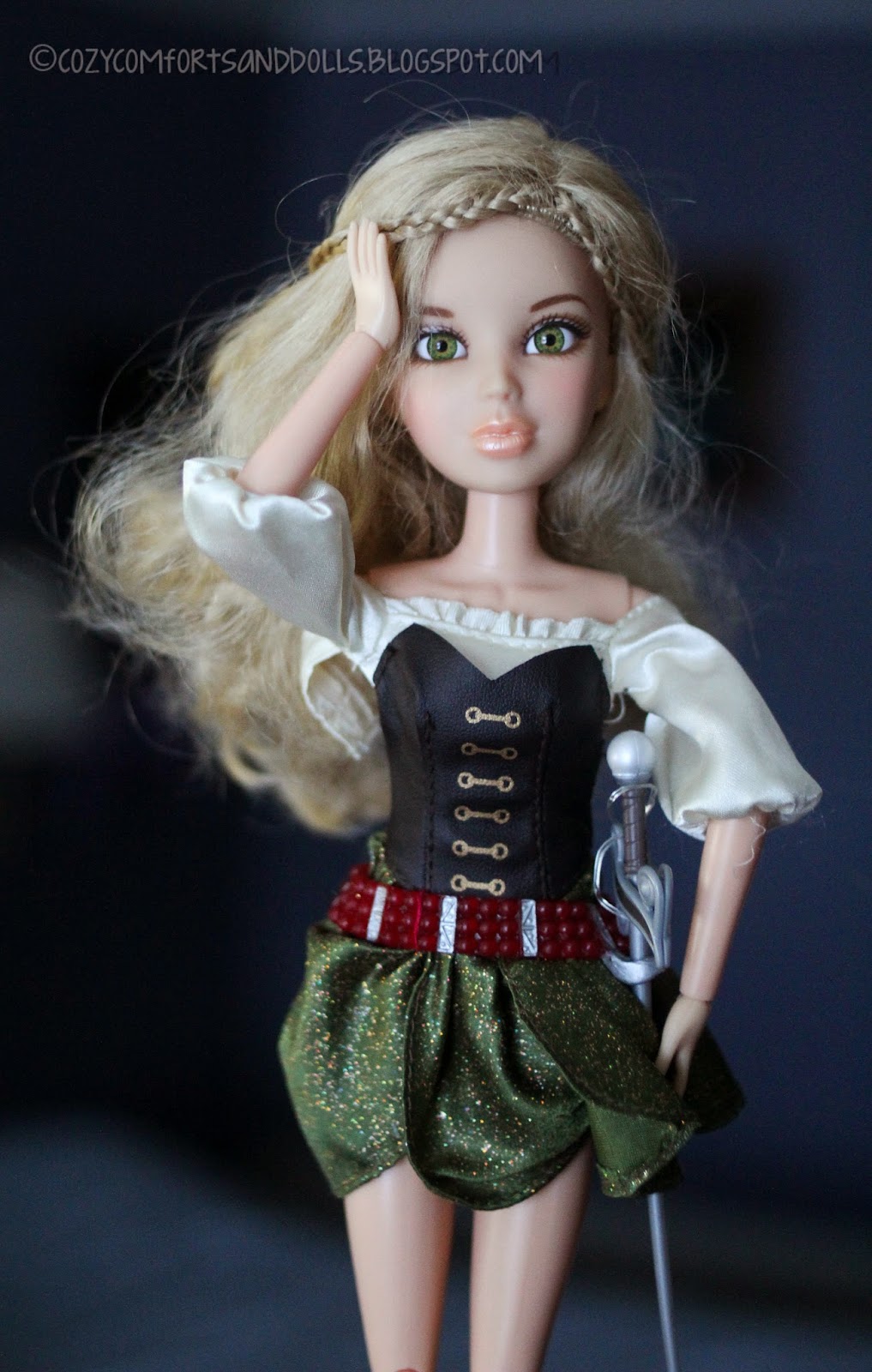 And she can!  Hayden looks quite cute dressed up as a Pirate. It's a bit short. Arrrgh.   Although if you google "adult female pirate costume" this is pretty much similar to what you would get, lol. 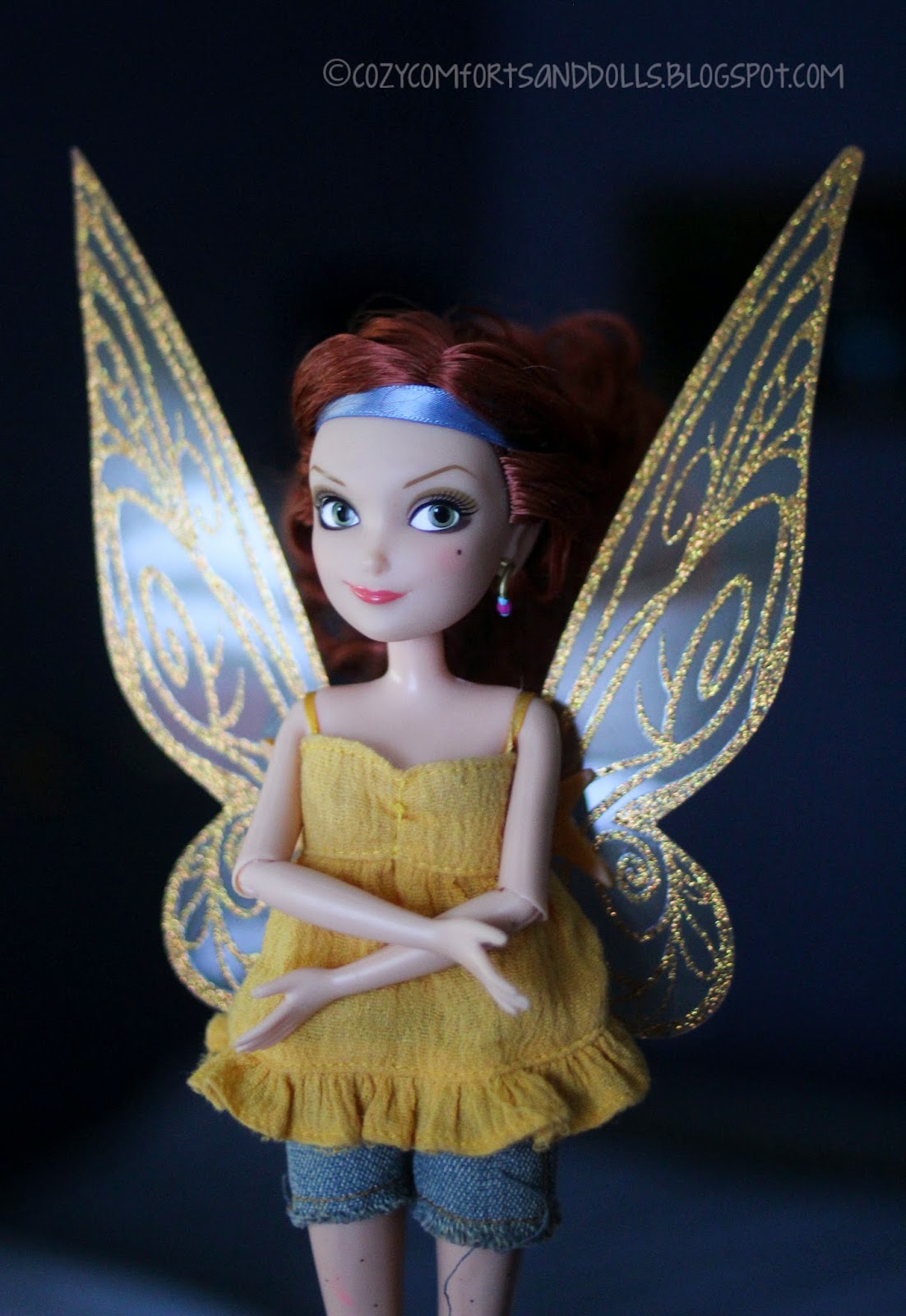 Zarina looks quite cute as well in Liv clothes.  I think the orange and blue fit her coloring and wings quite nicely!

She is really fun to photograph.  :)  I love how she pops against the duller colors of winter.  She'd be great to take on an autumn photo shoot for sure. 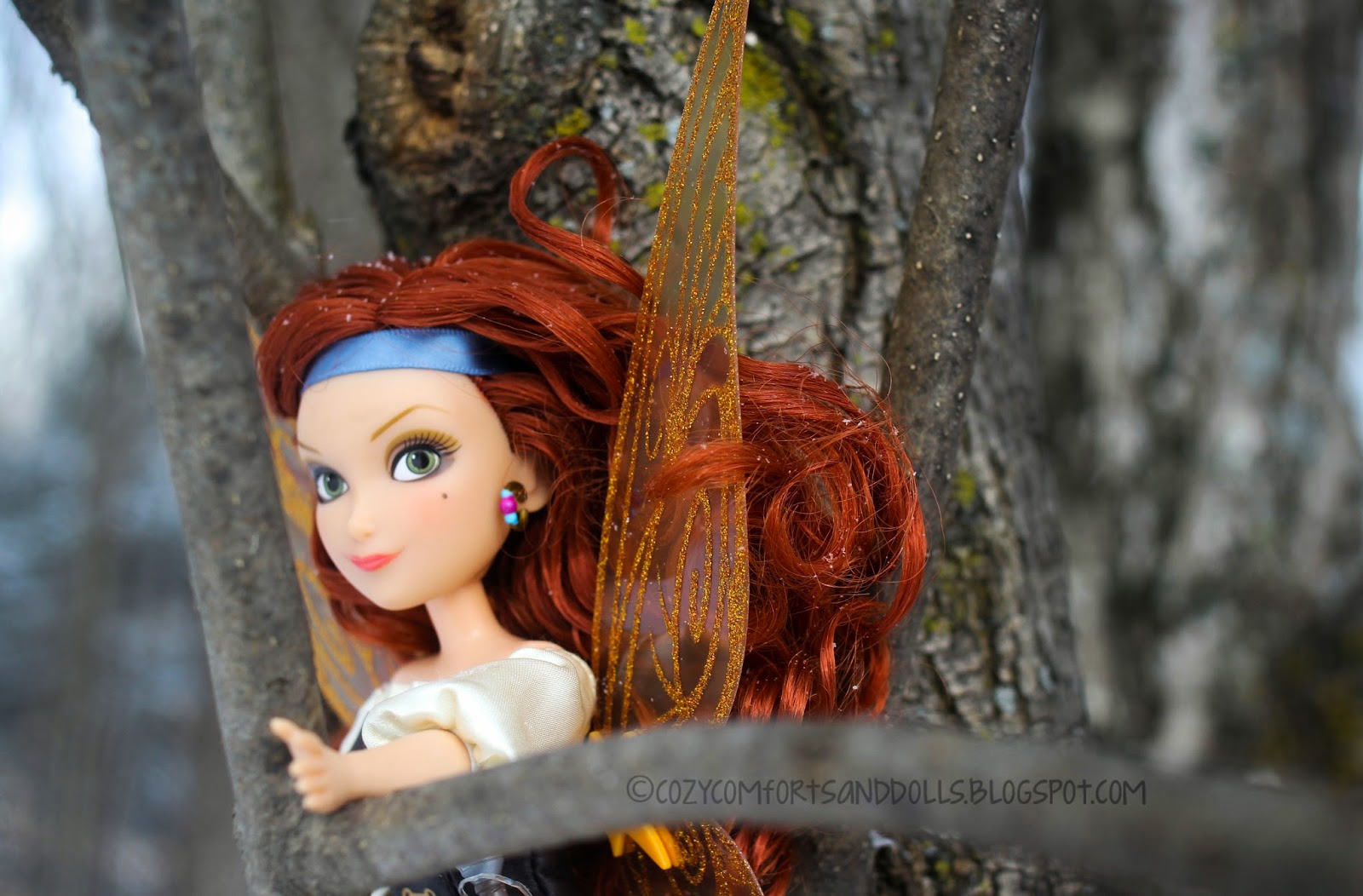 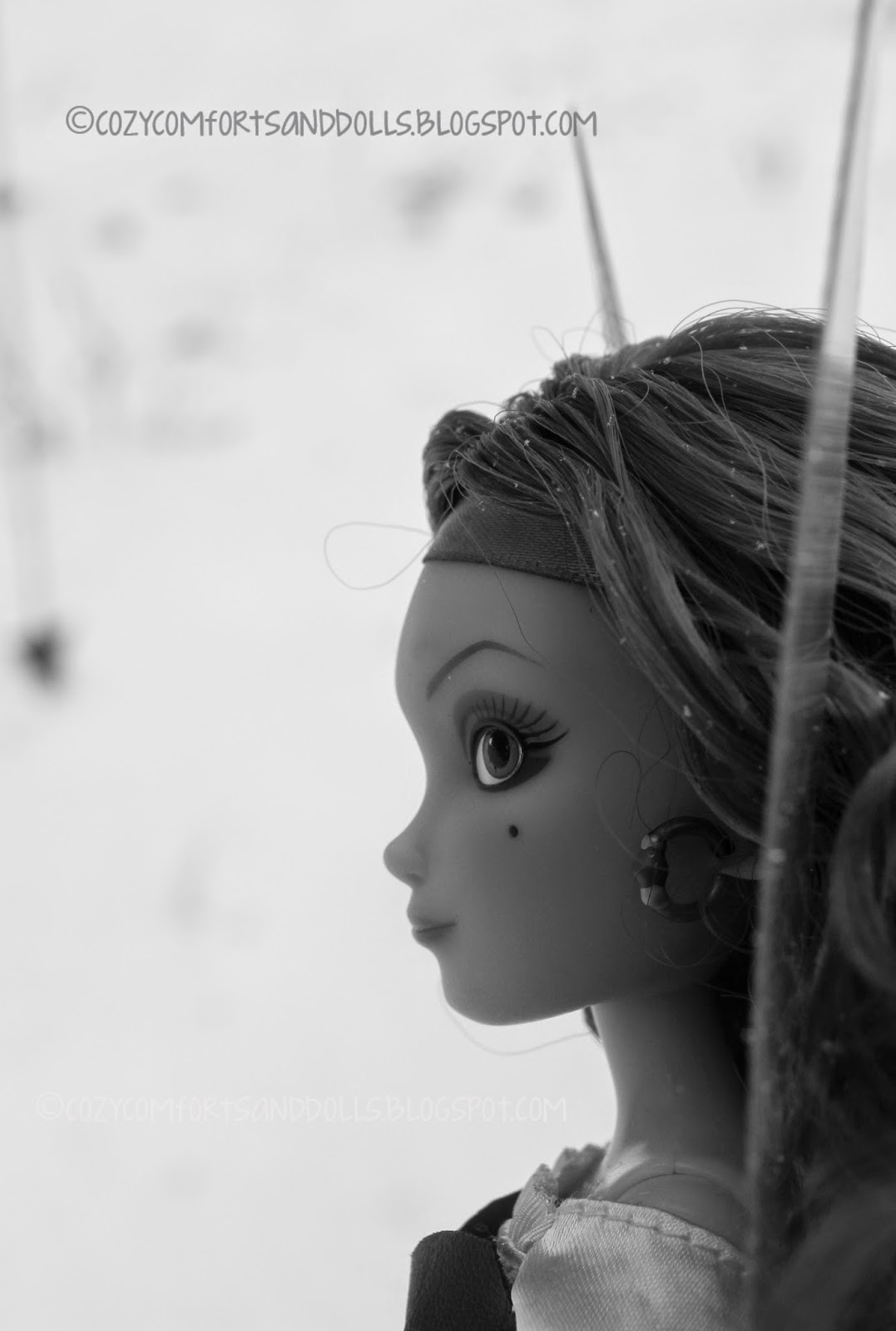 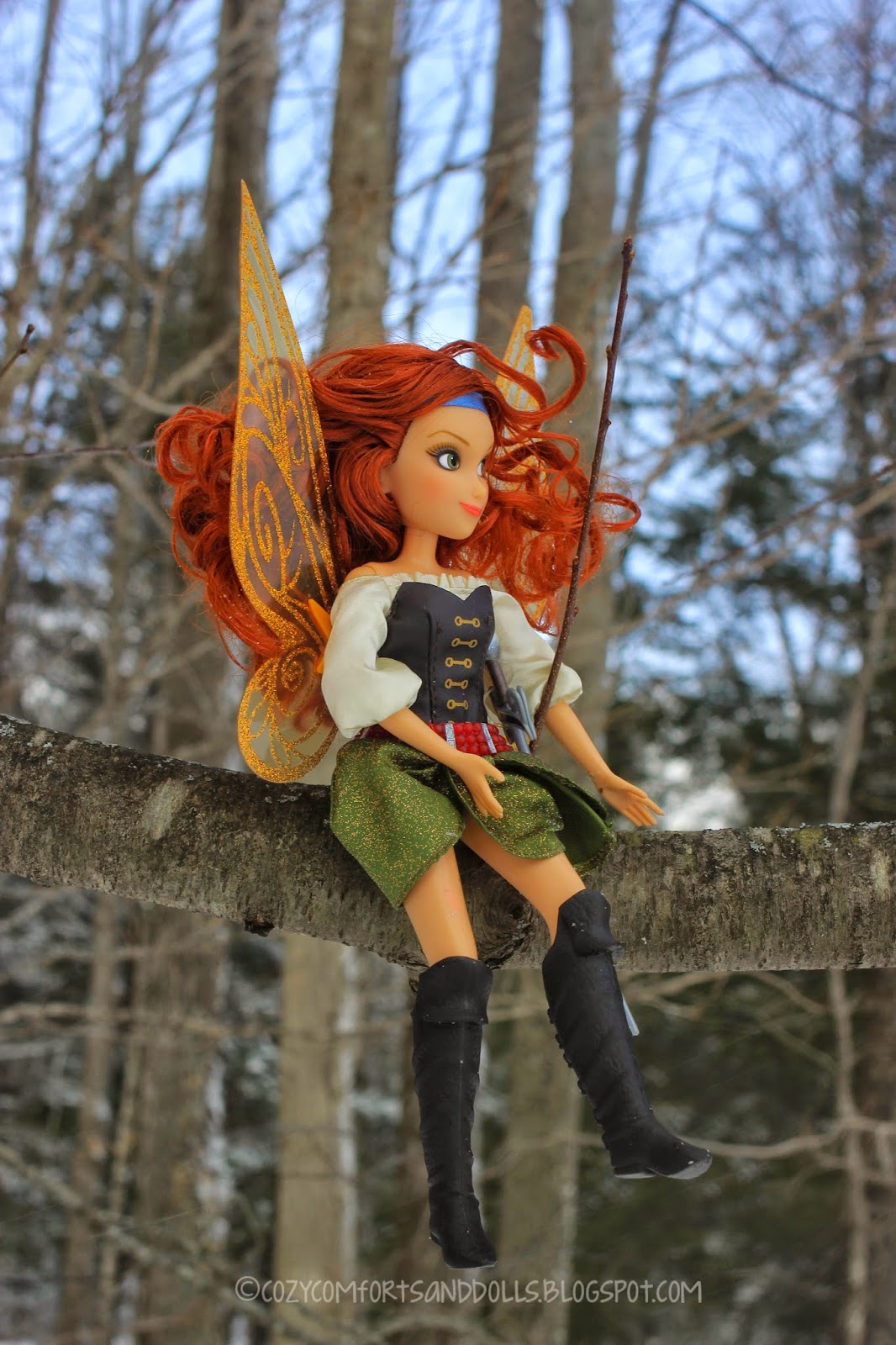 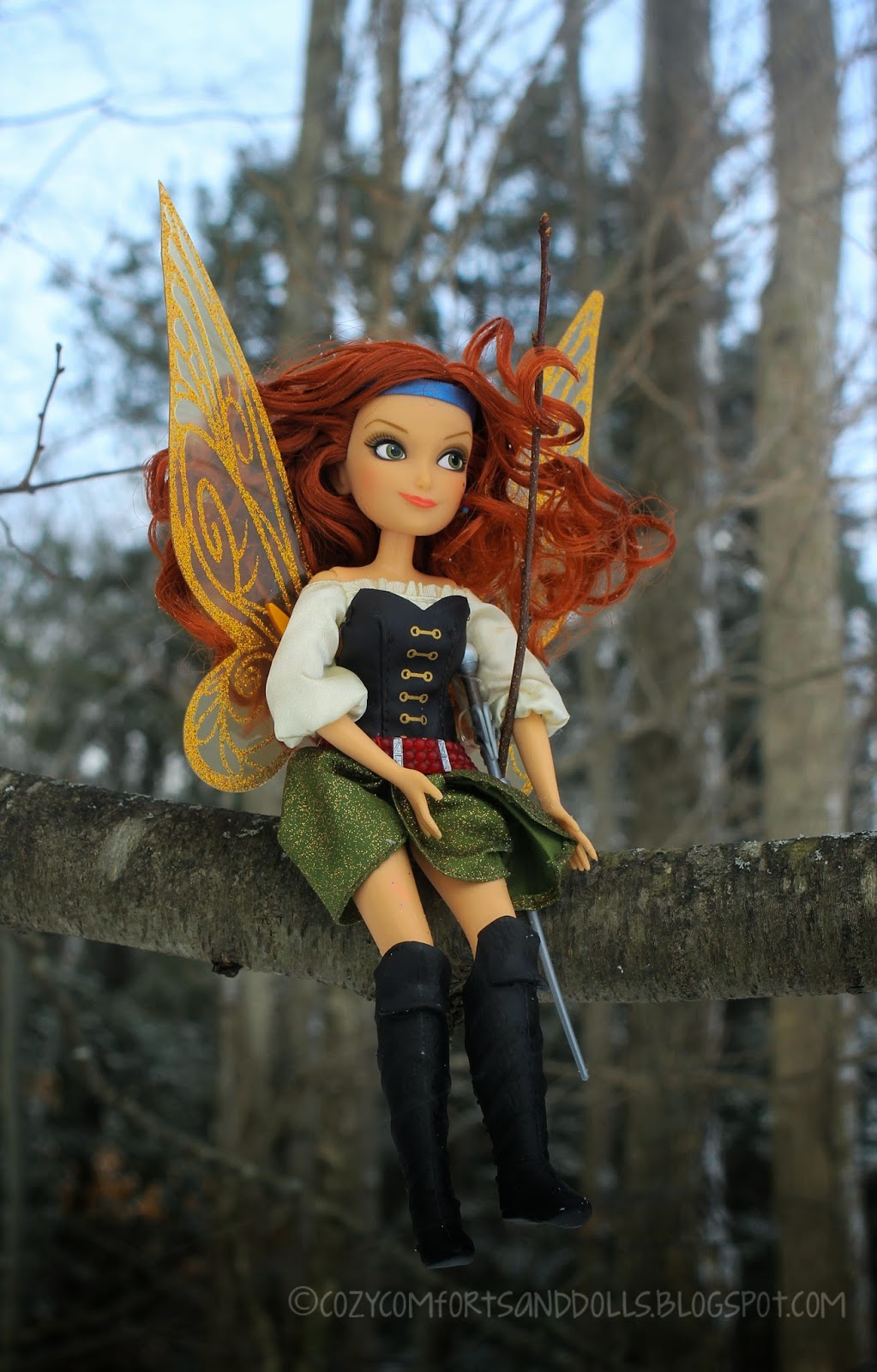 Sadly, when I went back to the website to include the link for where I got her, it looks like she's not listed on the Disney Store website anymore. :(  I wish there was more warning before dolls just disappear!

I did find her on Ebay and she's listed at only a few more dollars than what I paid for her ($14.95) so if you are interested, grab her while you can! UPATE 10/9/15 I also found her on Amazon listed around $17.00! Disney The Pirate Fairy Exclusive 10 Inch Doll Zarina 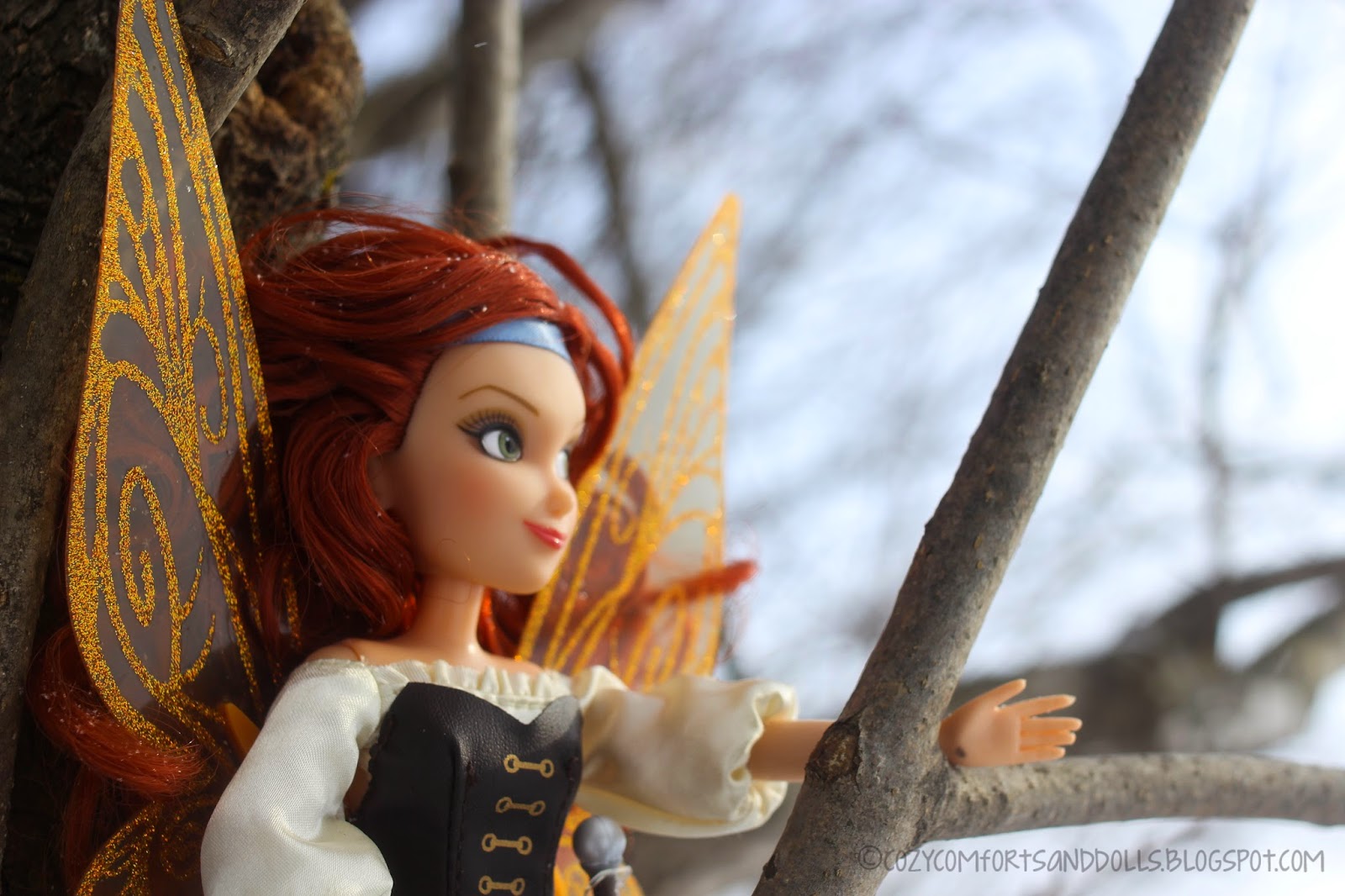 She is a really cute doll.  The combination of cute fairy and spunky pirate makes her irresistible to my 5 year old who adores both aspects of the Neverland world.  Little Button got Periwinkle for Christmas and I recently added a Fawn doll to my collection so we have been having lots of fun with our fairy adventures.  Now we just need Tink!

I hope you guys enjoyed this review of the lovely Zarina and thanks for stopping by!
Photo shoots of Fawn and Periwinkle coming soon.  ;)
xo

Disclaimer:  I recently signed up for the Amazon Affiliates program.  If you would like to support this blog, please consider using my Amazon link on the top left side bar for any happy Amazon shopping you might do (or click directly on the link to the specific product) and a teeny tiny commission would be generated for this blog to be used for doll reviews and upcoming giveaways.  It does not cost anything for you at all.If you have your own Amazon Affiliates link, let me know and I will go through yours as well!  (I do a lot of shopping on Amazon, lol.)Thank you so much! :) xoxo
Posted by Farrah at 10:45 PM