Most of you are probably seeing clear signs of spring such as green grass, flowering trees, crocuses, and warmer temps.  Here it still feels very much like winter, there is snow on the ground and it was actually snowing yesterday!
Normally, this would make me feel pretty depressed, but in my new approach to trying to make "lemonade out of lemons" I am excited that it's still winter-y because I have more time to catch up on my snowy doll photo shoots! ;) 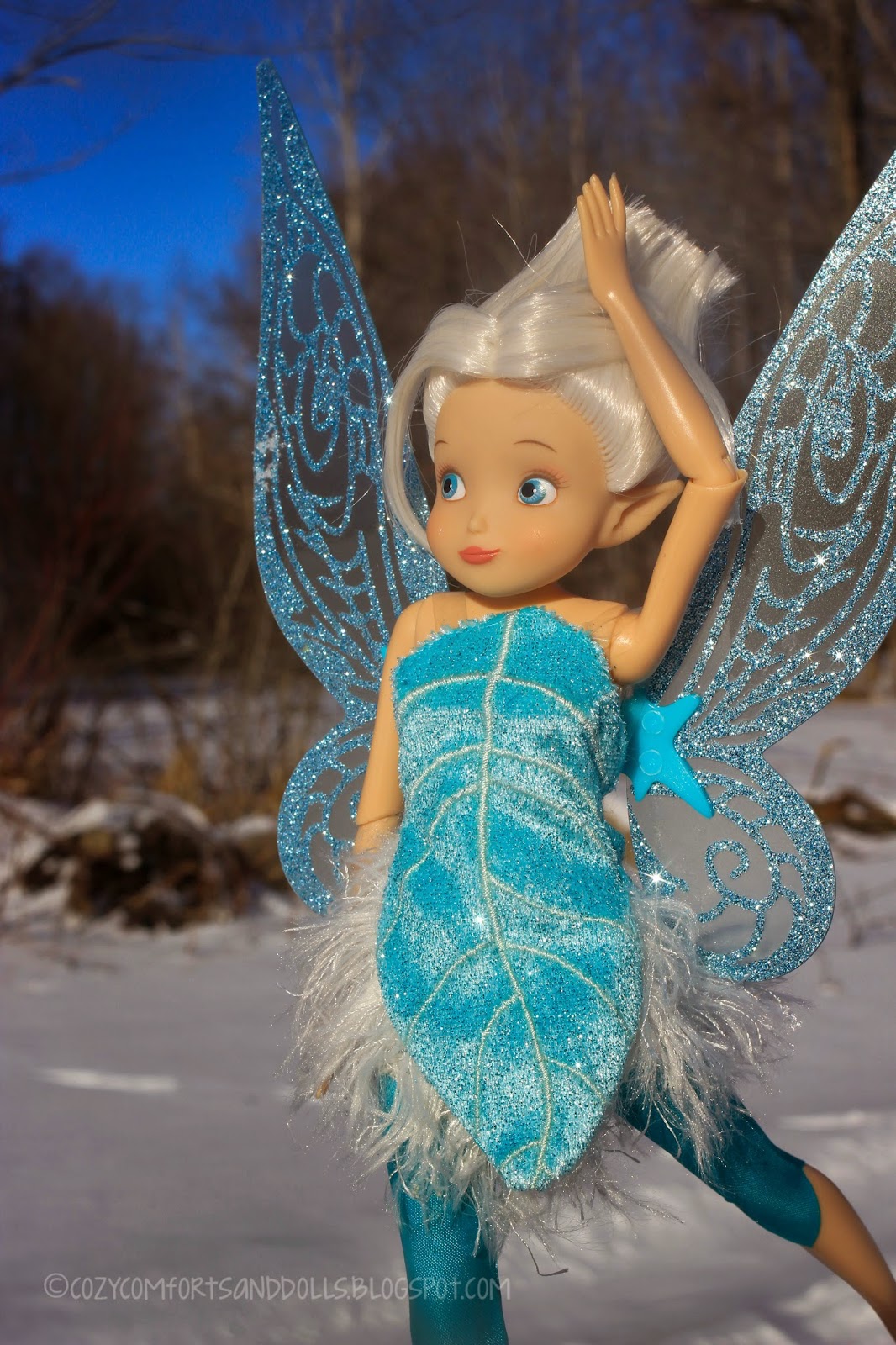 Today's review is of the Disney Classic 11.5 inch doll Periwinkle.
Santa brought her for Little Button on Christmas day, but normally you can find her at the Disney Store or on their website.  ;)
She is about $14.95, but very often goes on sale for 2 for $10.

She can also be found on Amazon for a little over $12 here:
.Disney Periwinkle - ''Secret of the Wings'' Disney Fairies Doll - 10''

Periwinkle's character is introduced in the 4th Disney Fairy movie called Tinkerbell and the Secret of the Wings.  She is a very sweet little fairy and in case you haven't seen the movie, I won't give out any spoilers.  ;) 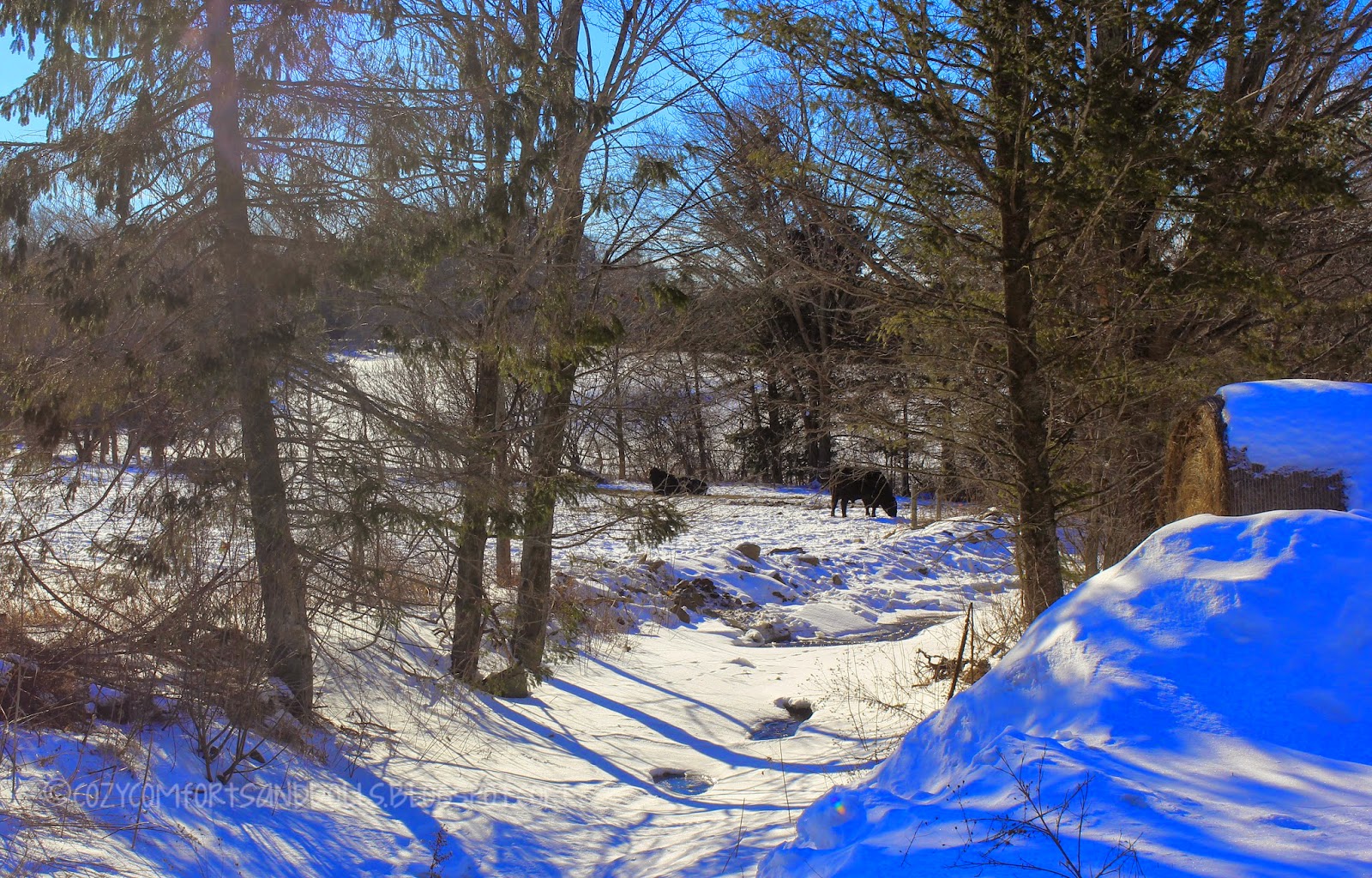 These photos were actually taken in January, but it pretty much still looks like this outside!
We've had a couple of days this month above 30 deg F, so the creek has started to show through the snow a bit and some of the snow has disappeared, but there is still quite a bit waiting to melt. 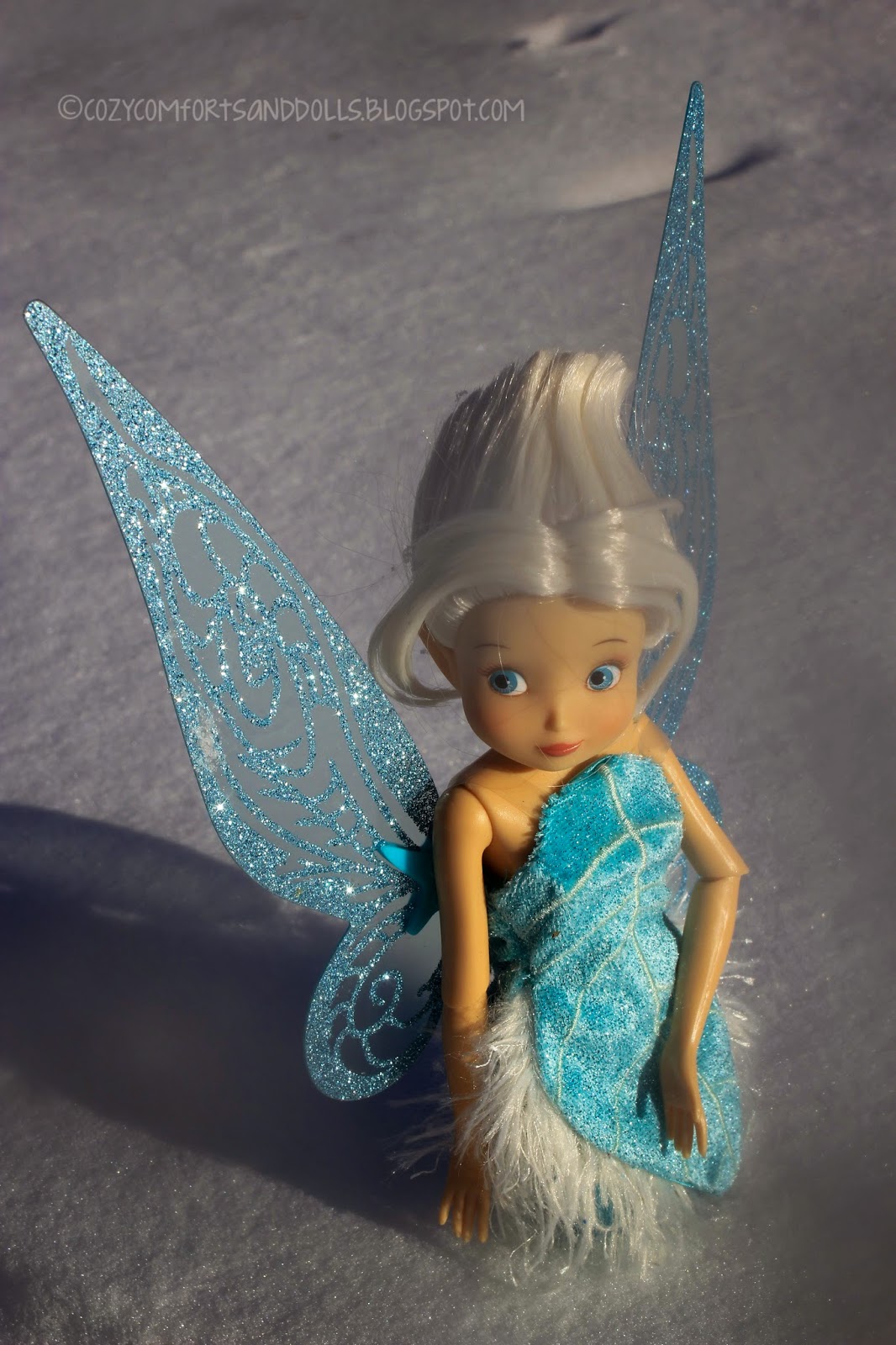 On this particular day, I took Spectra, Frankie and Peri with me for one of my afternoon walks to this little secluded field that I really like.  It's so quiet and peaceful here and I always end up seeing some sort of wildlife which totally makes my day.

Periwinkle is one of the "frost fairies" and lives in the Winter Woods  Her and her friends have the task of preparing winter on Earth and keeping things frosty and cool. 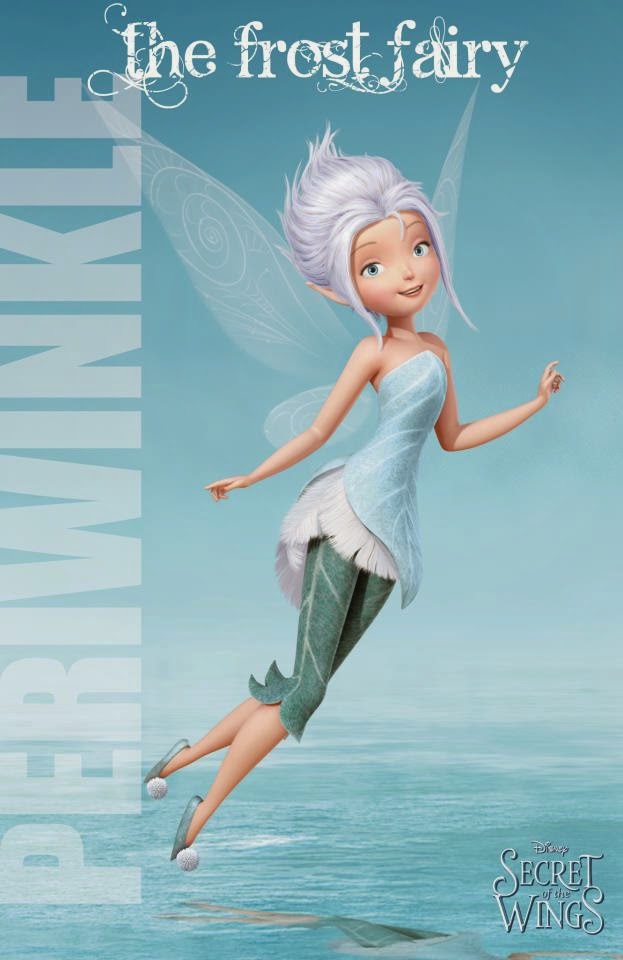 Here's a look at her animated character for comparison.  I think they did a really good job of capturing her features, although I kind of wish they did her face differently, but more on that later. 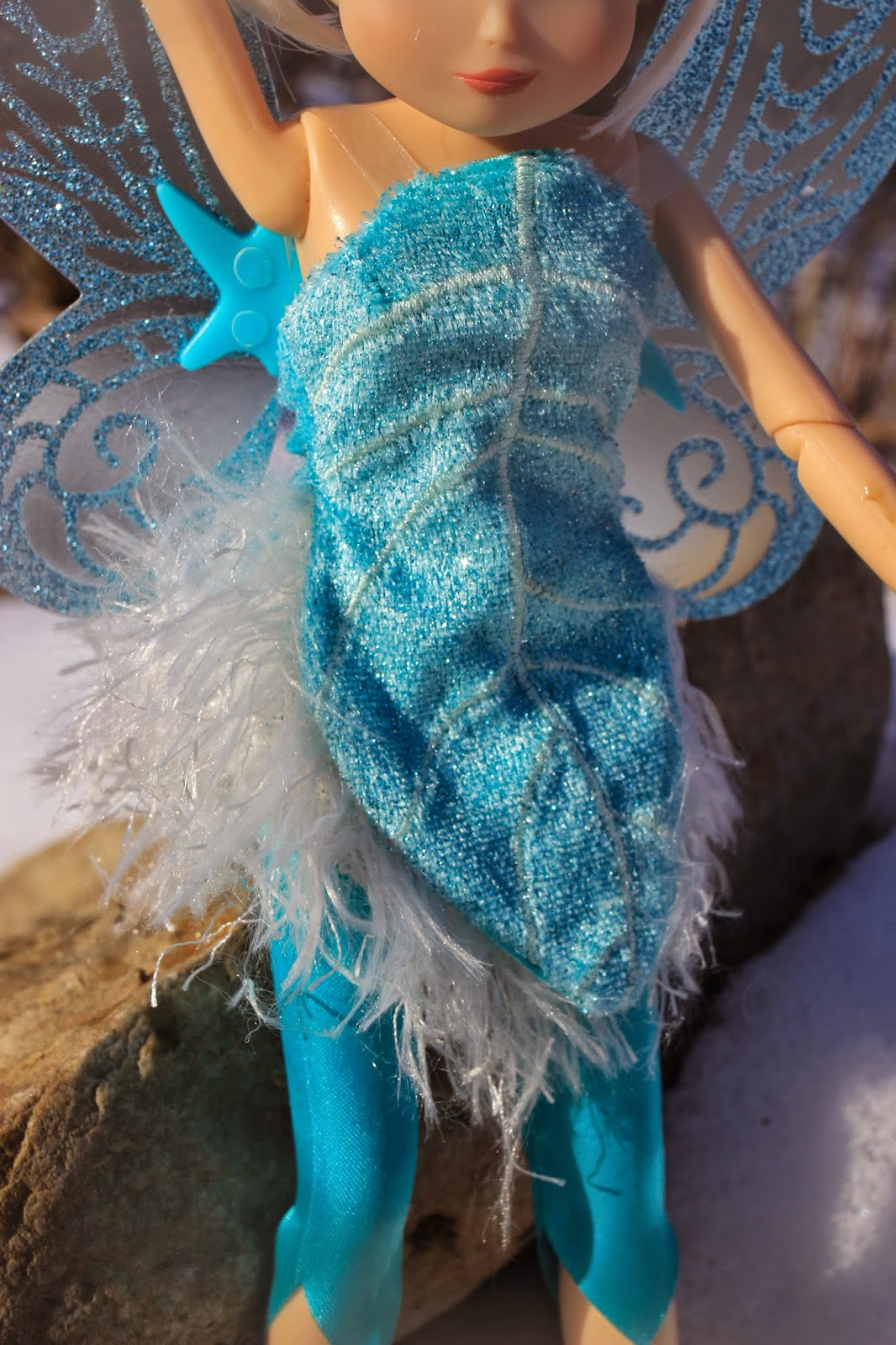 Her outfit is adorable and pretty movie-accurate.  She wears a strapless soft, sky-blue tunic made to look like a leaf with soft fluffy "fur" around the edges.  It velcros together in the back directly under the spot where her wings are attached.  The top is asymmetrical giving an off-the-shoulder look without straps.  She's also wearing cropped satin capris.  The colors are a little different than the movie version, but still very pretty. 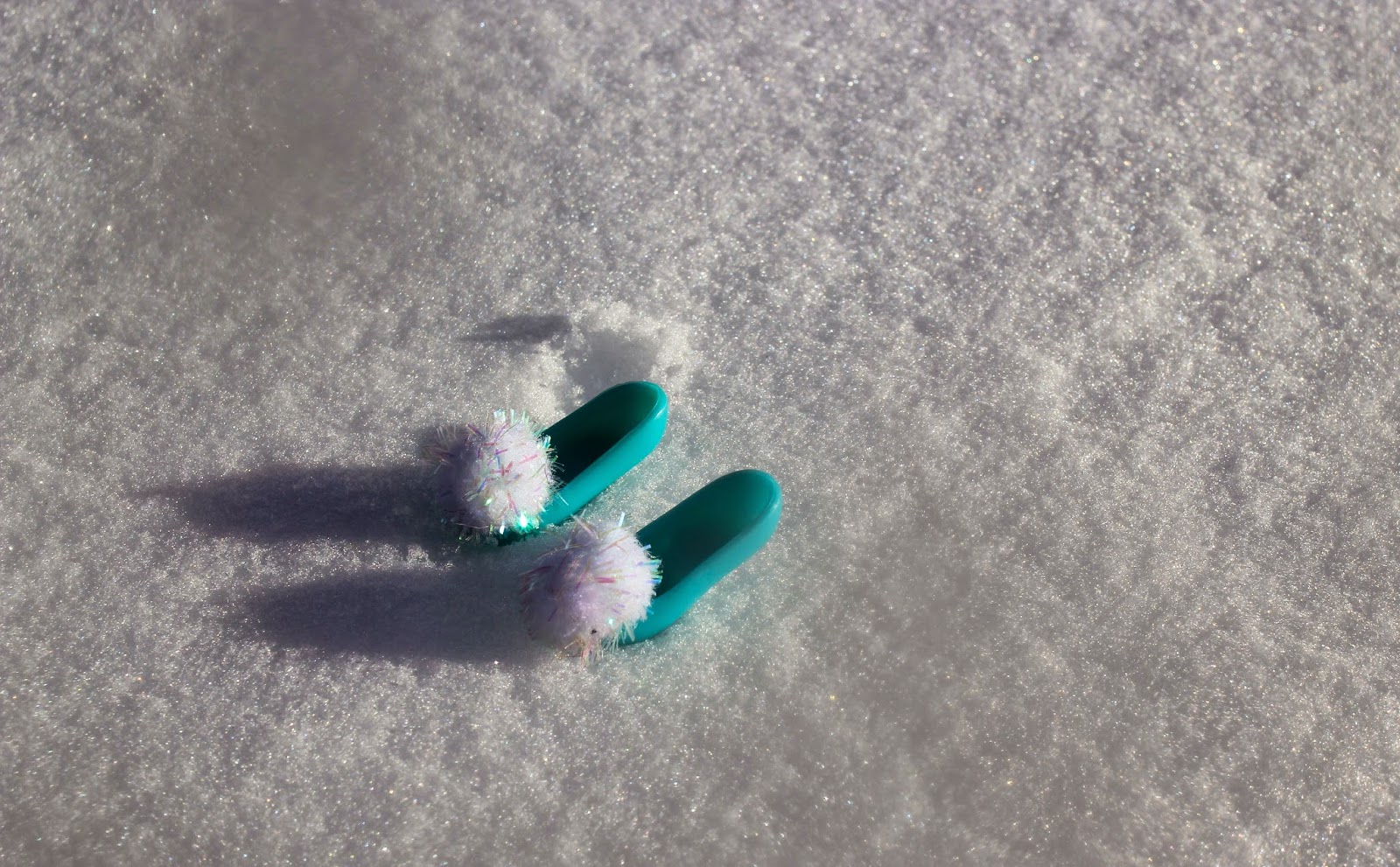 Her shoes are tiny ballerina flats and are just like Tink's, but an aqua-blue color. 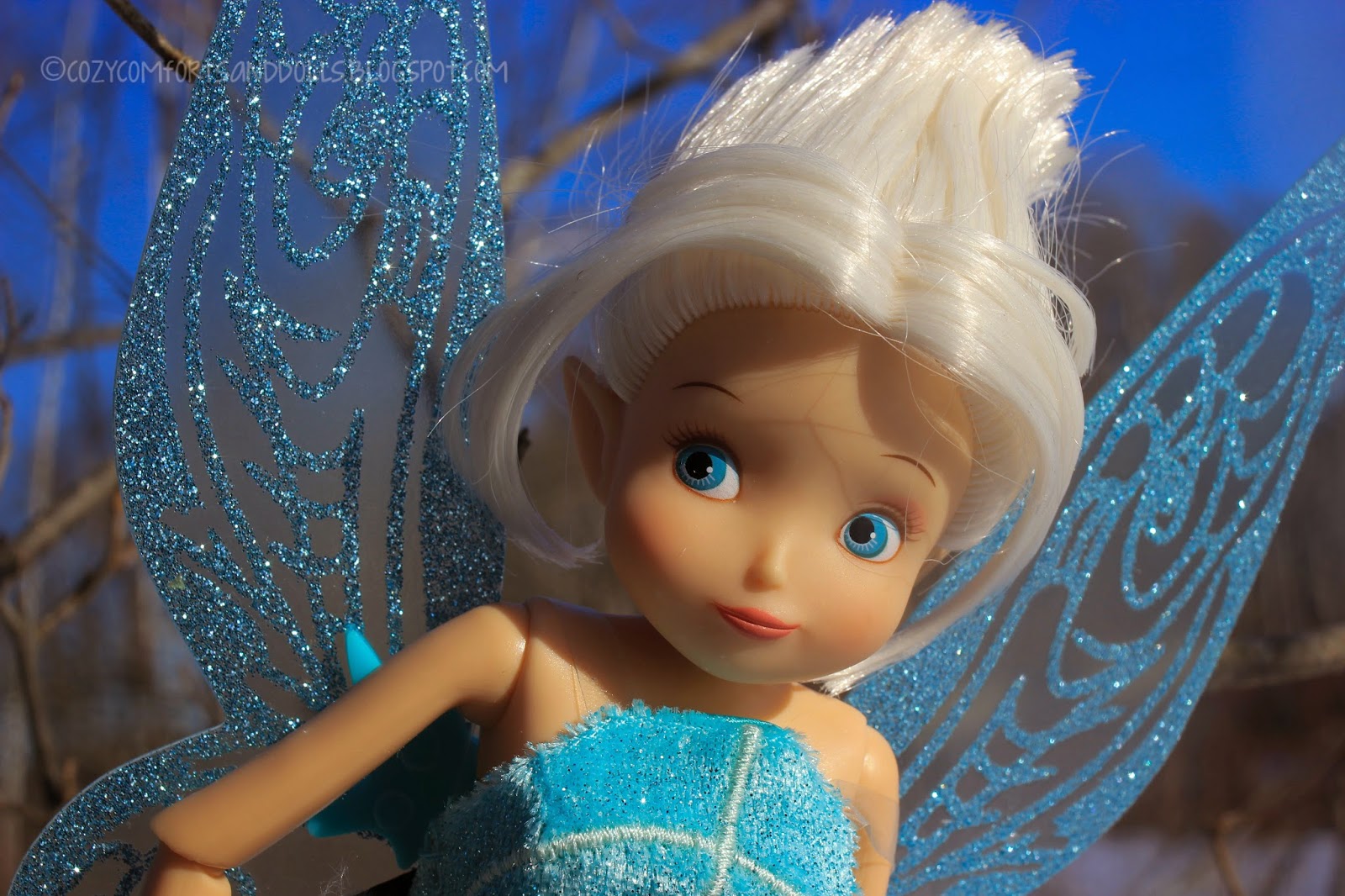 Her face is sweet and fairly movie accurate, but she kind of looks confused or like "oh gosh" or maybe even like she's getting ready to roll her eyes, lol.
I'm not sure but it's something I can't quite put my finger on.
Her eyes are sky blue to match her outfit with tiny white spokes to add depth to her irises.
Her eyelashes are painted on and delicate as are her tiny eyebrows.
She has a wee button nose and coral lips sort of turned up in a little smirk.
Her ears are very pixie-like and adorable!
Her frosty hair-do is pretty true to her animation and is fairly soft (not too gelled up), but kind of bluntly cut along the top. 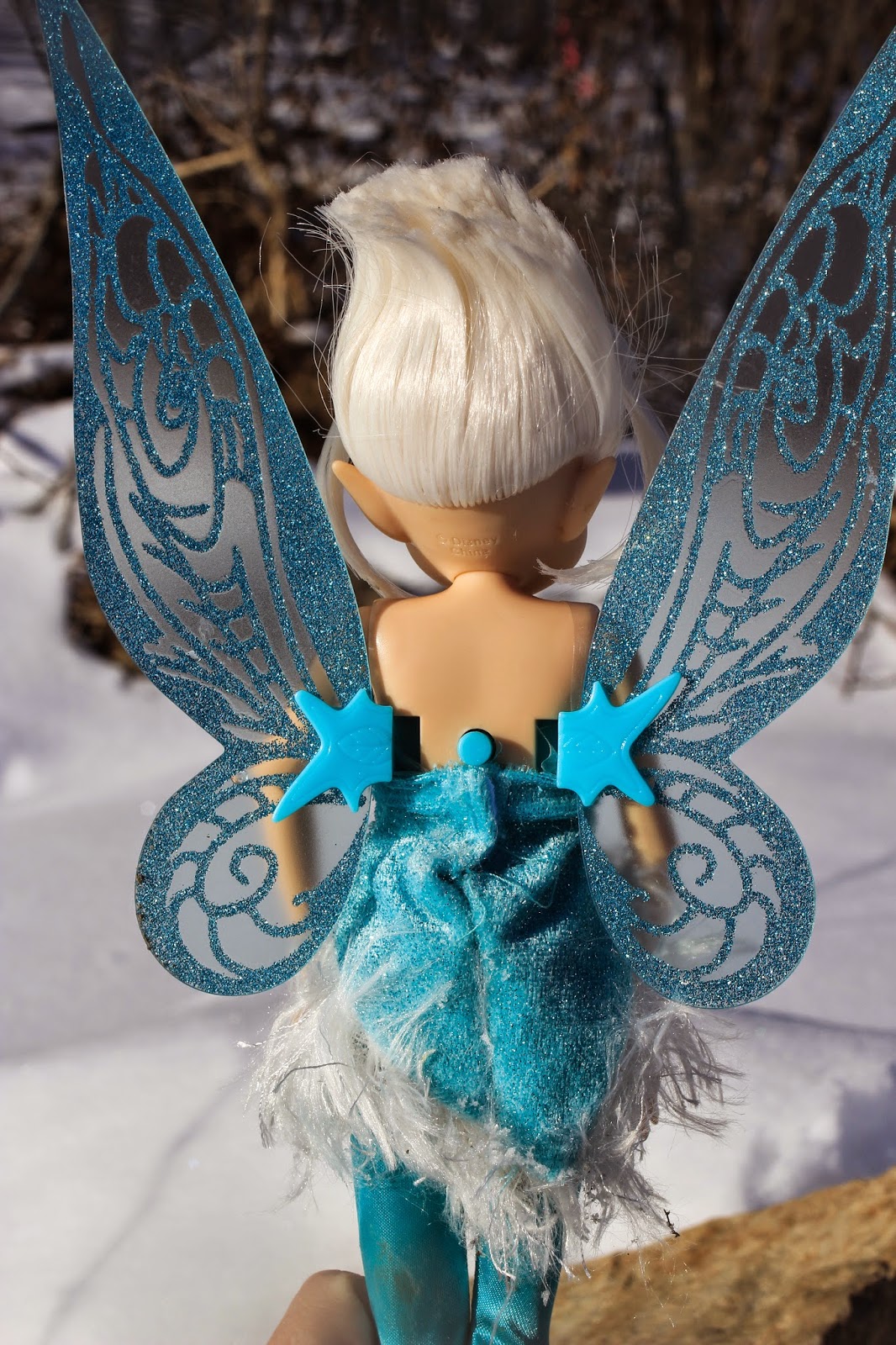 Her wings are just like Zarina's except this lovely blue, glittery color.  When you press the button, they flutter which has a fun affect during play.
The dress fits neatly below (even though it looks like I velcro'd her up sort of sloppily.  Whoops!)
Here you can also see the asymmetry in the back of her dress, which balances out the front top portion.
By the way, her articulation is just like Zarina's as well.  She has 9 points (no wrist or ankle articulation and click knees.) 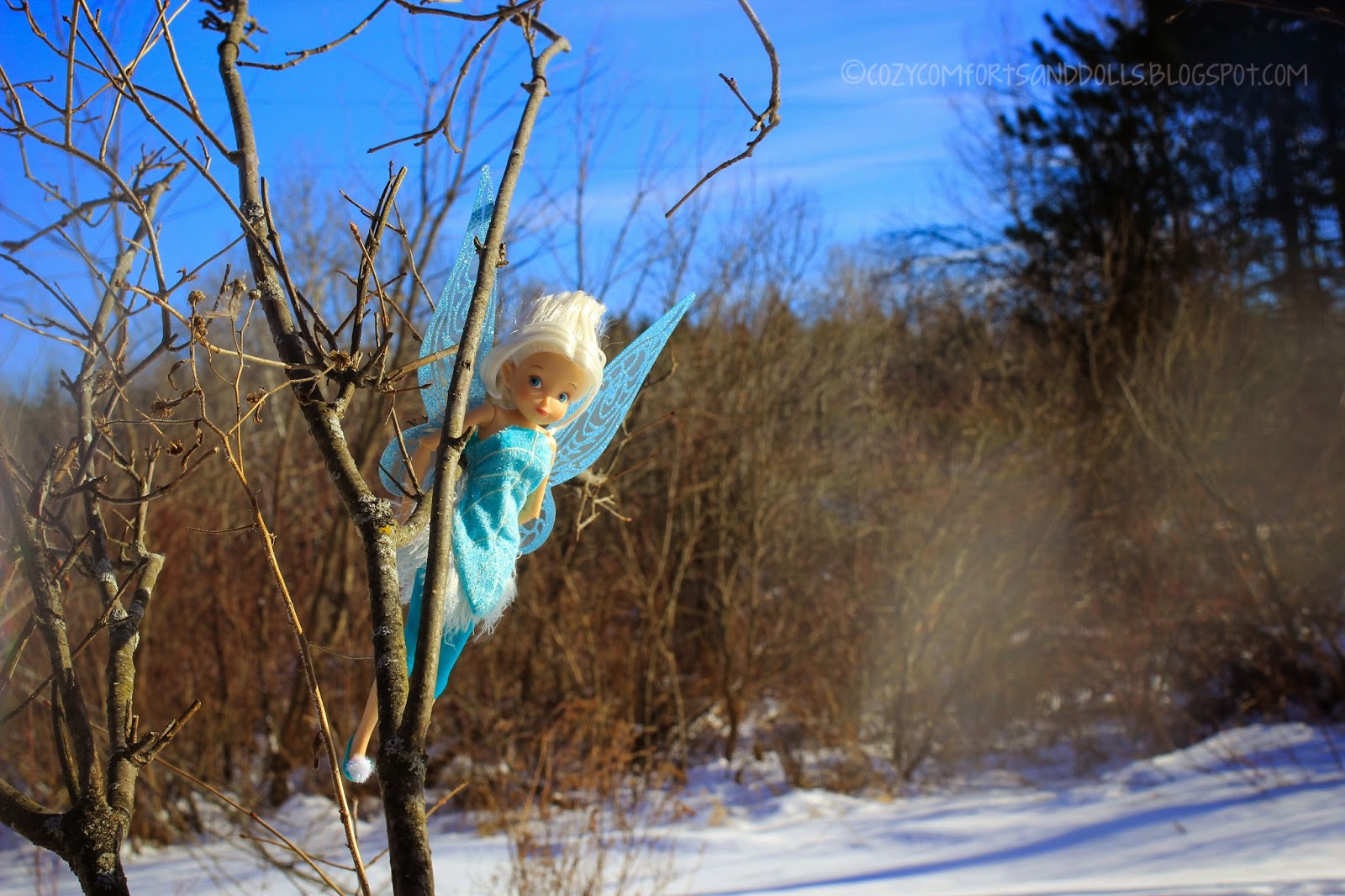 She was a lot of fun to pose and photograph.  It's fun to have a winter-themed doll that looks right at home in this setting! 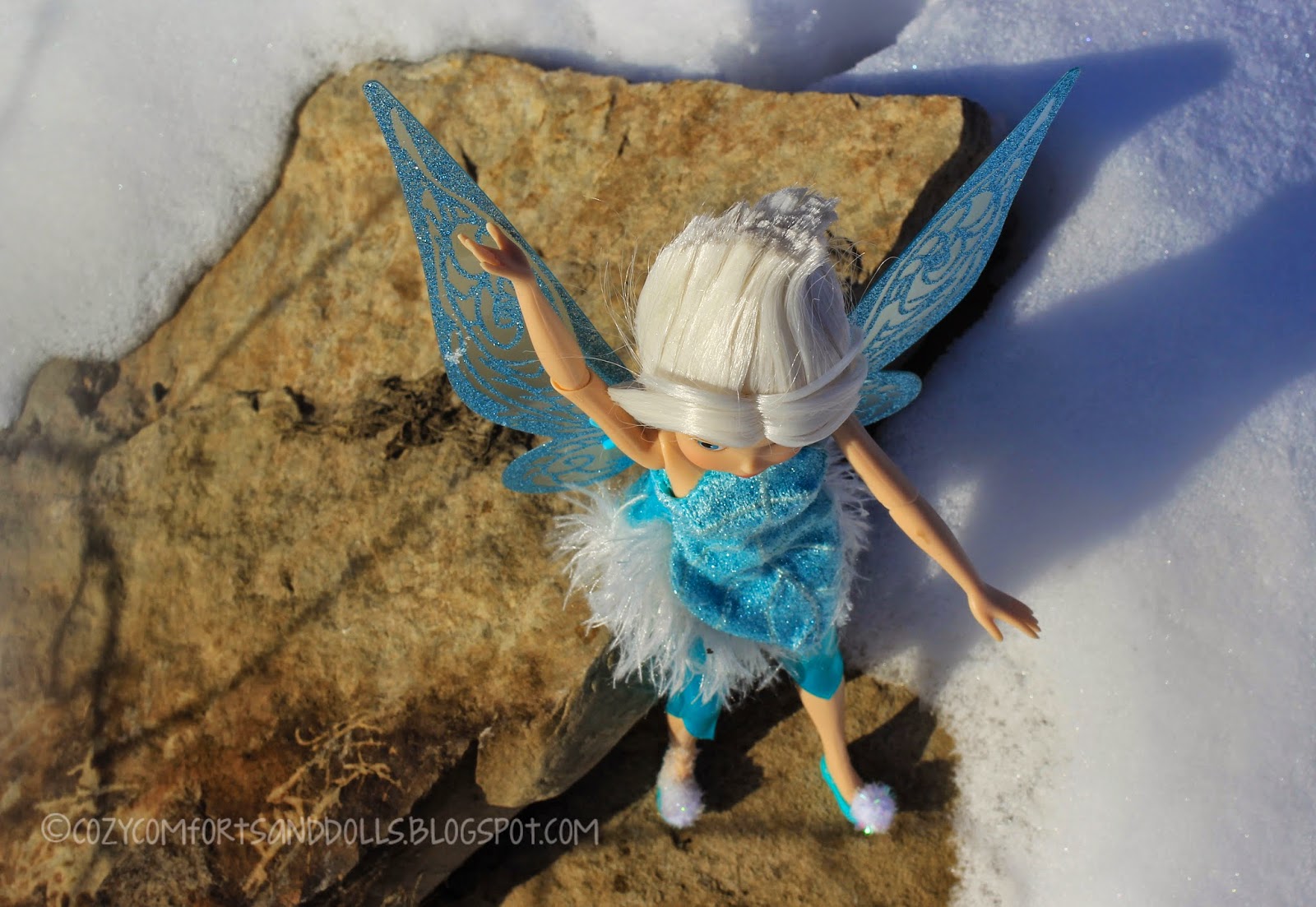 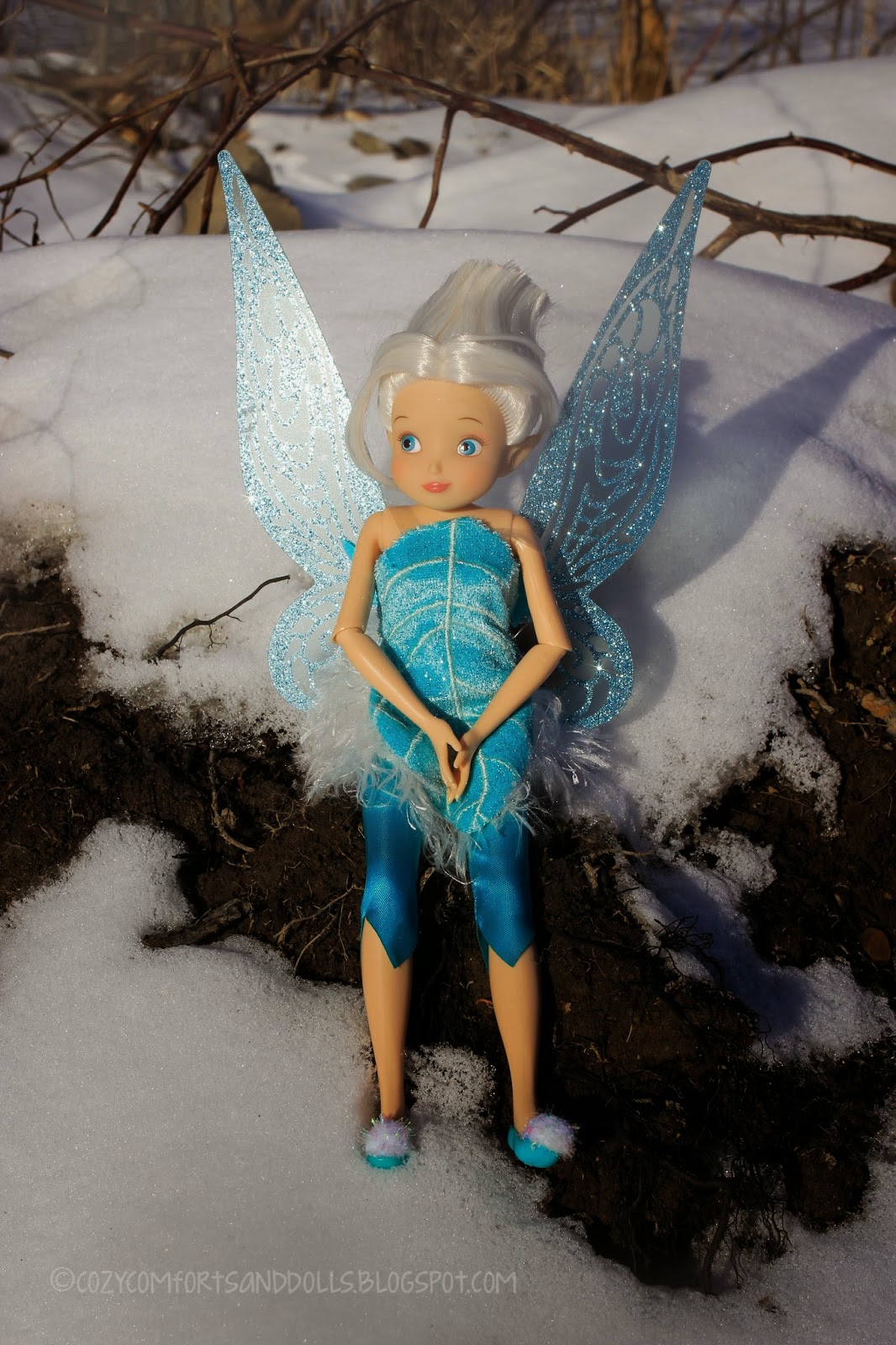 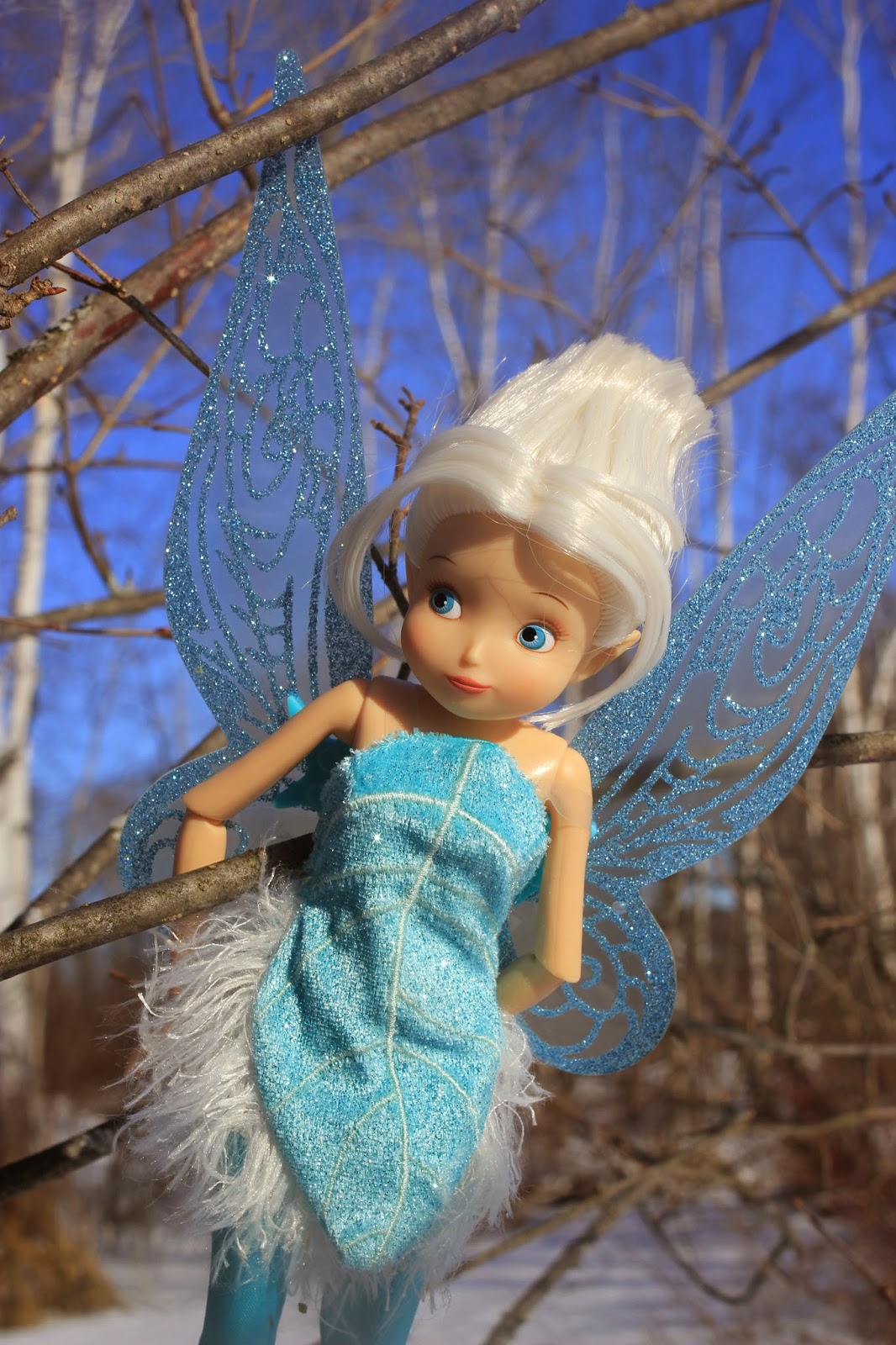 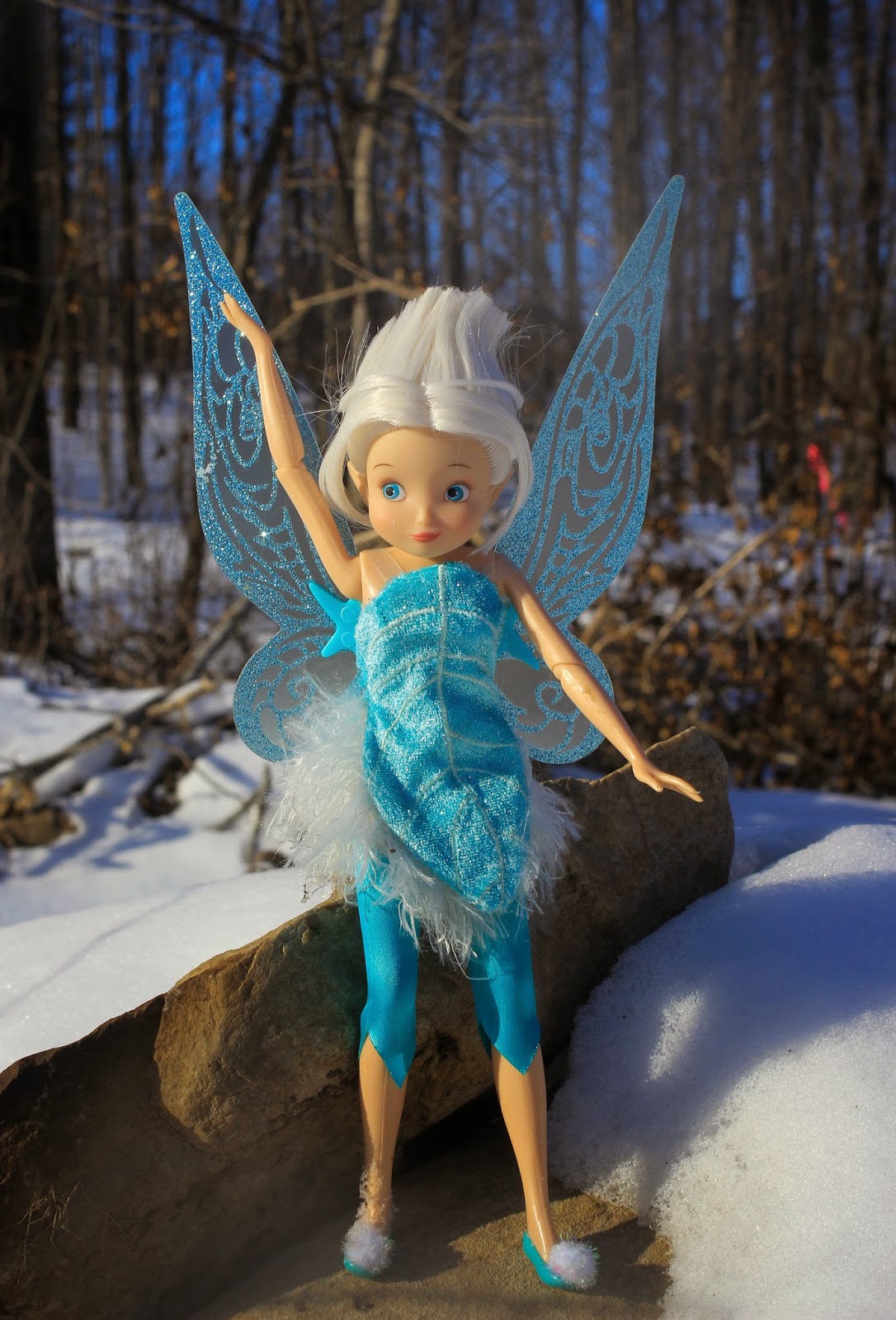 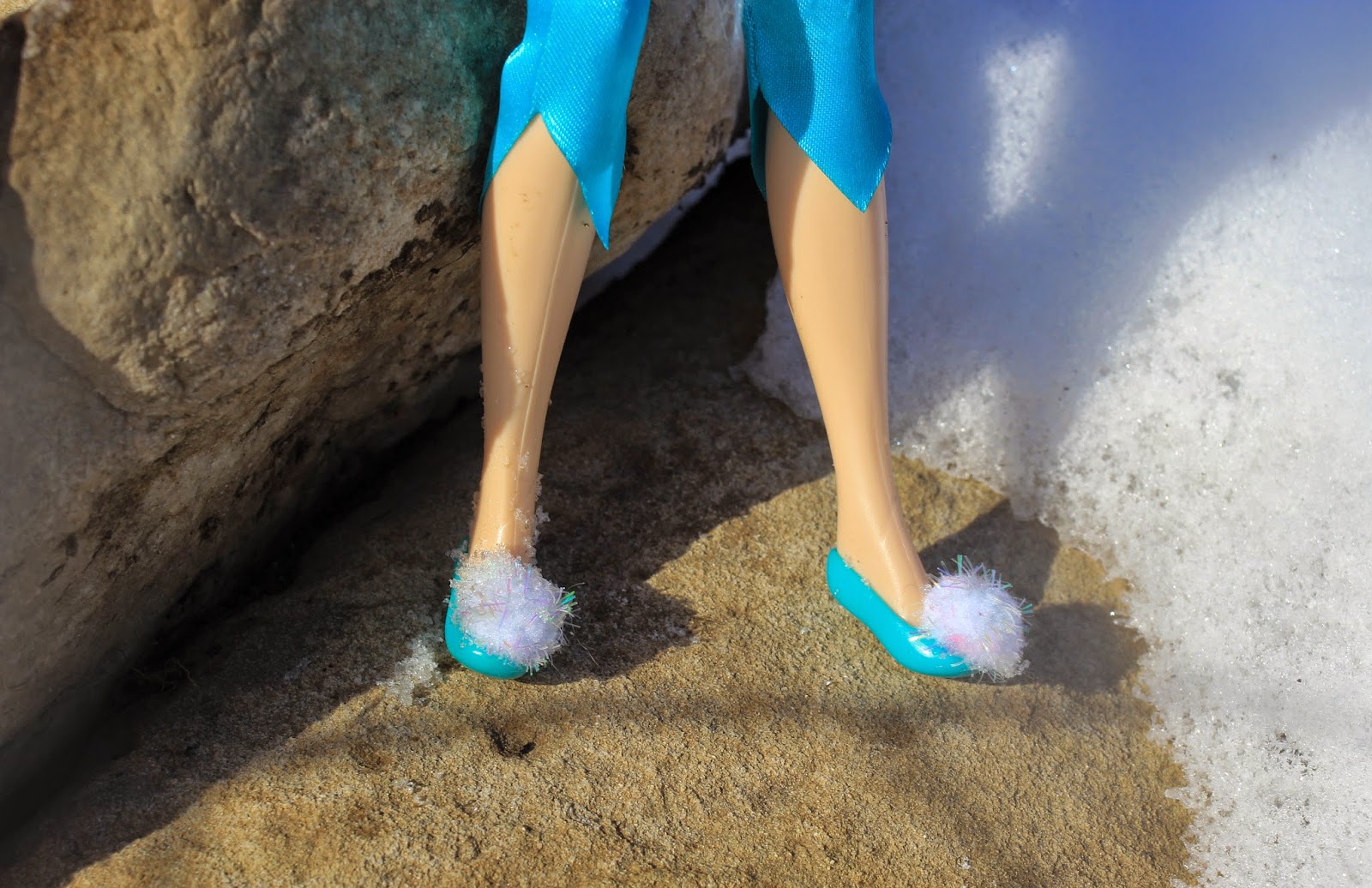 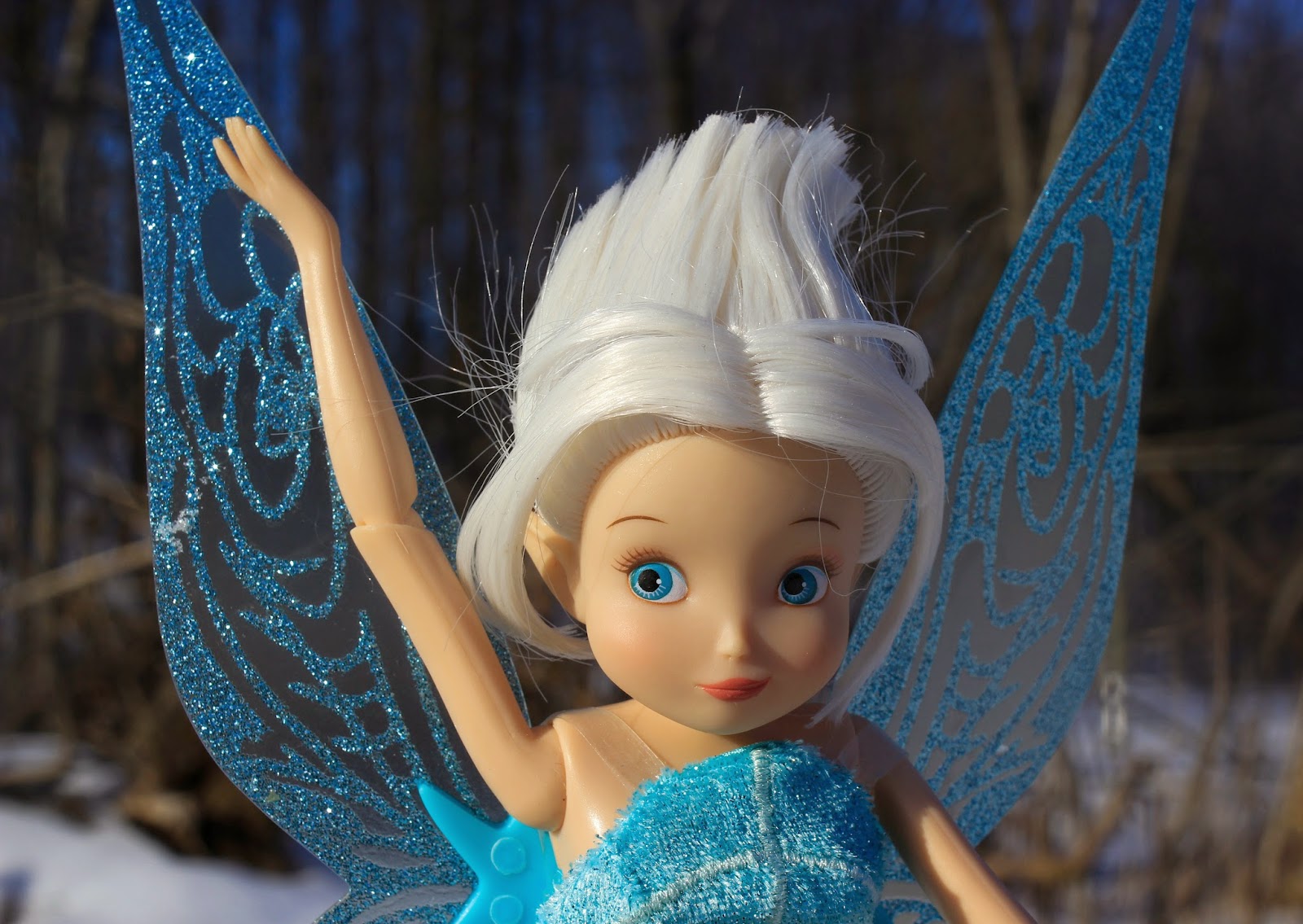 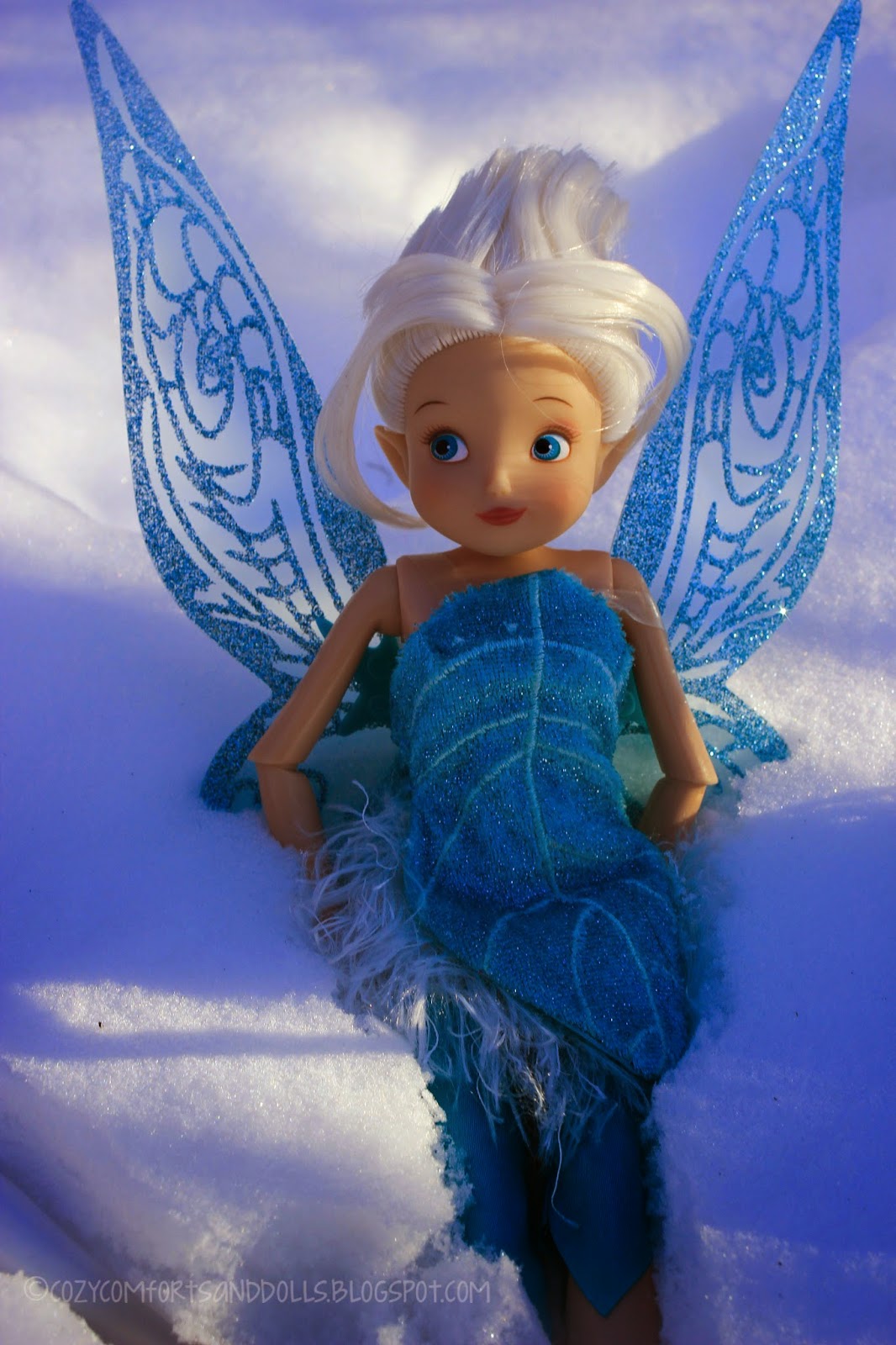 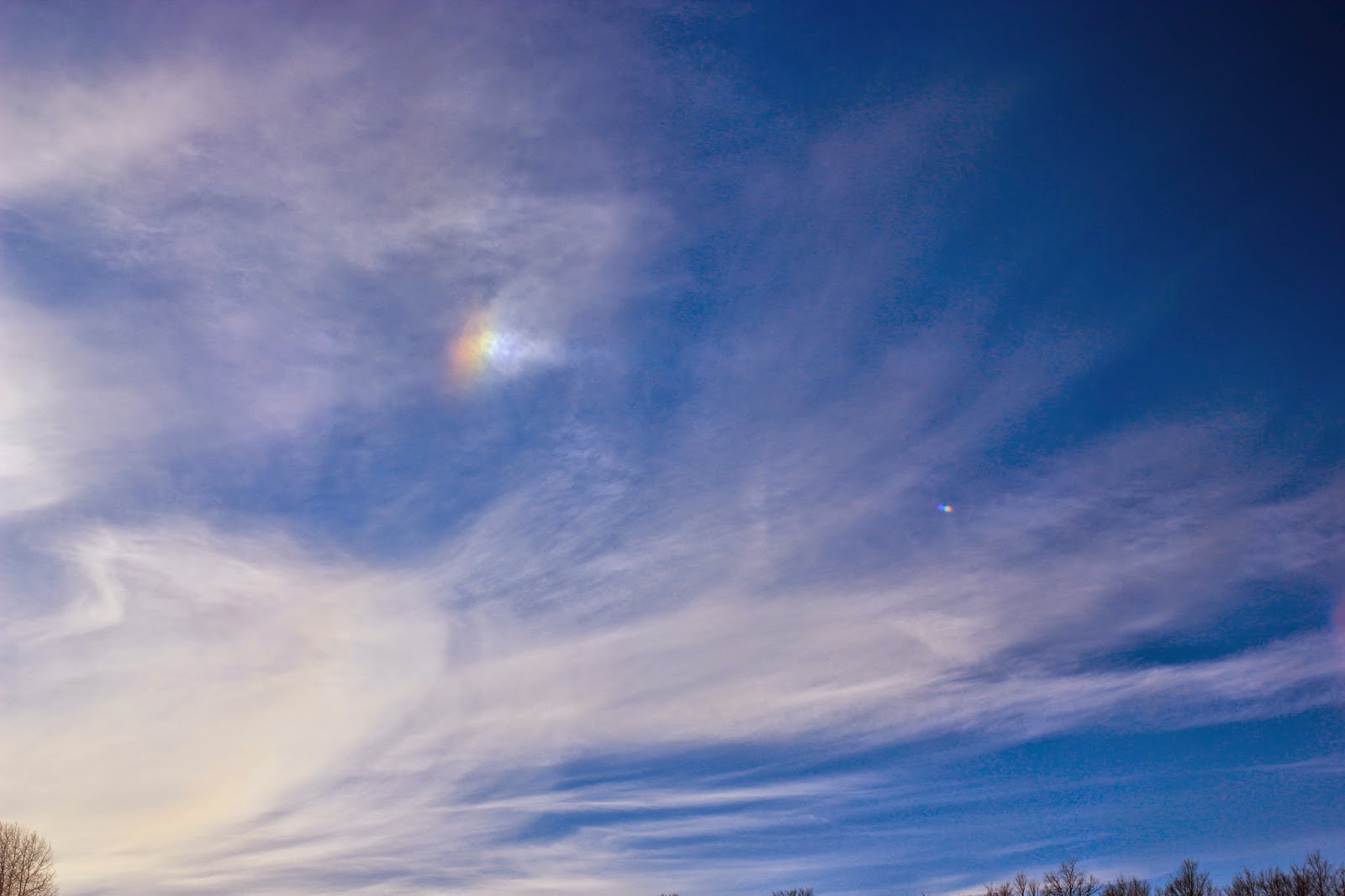 Every time I go to this spot, I feel very connected to my dad and grandparents who have passed away. Since this was my grandparents' farm I also get a sense that they're "around" and I sort of feel like my dad is always with me.  I've decided that whenever I see rainbows, that is my sign that they are there-especially my Grandmother. :) Along with hearts, of course for my dad! 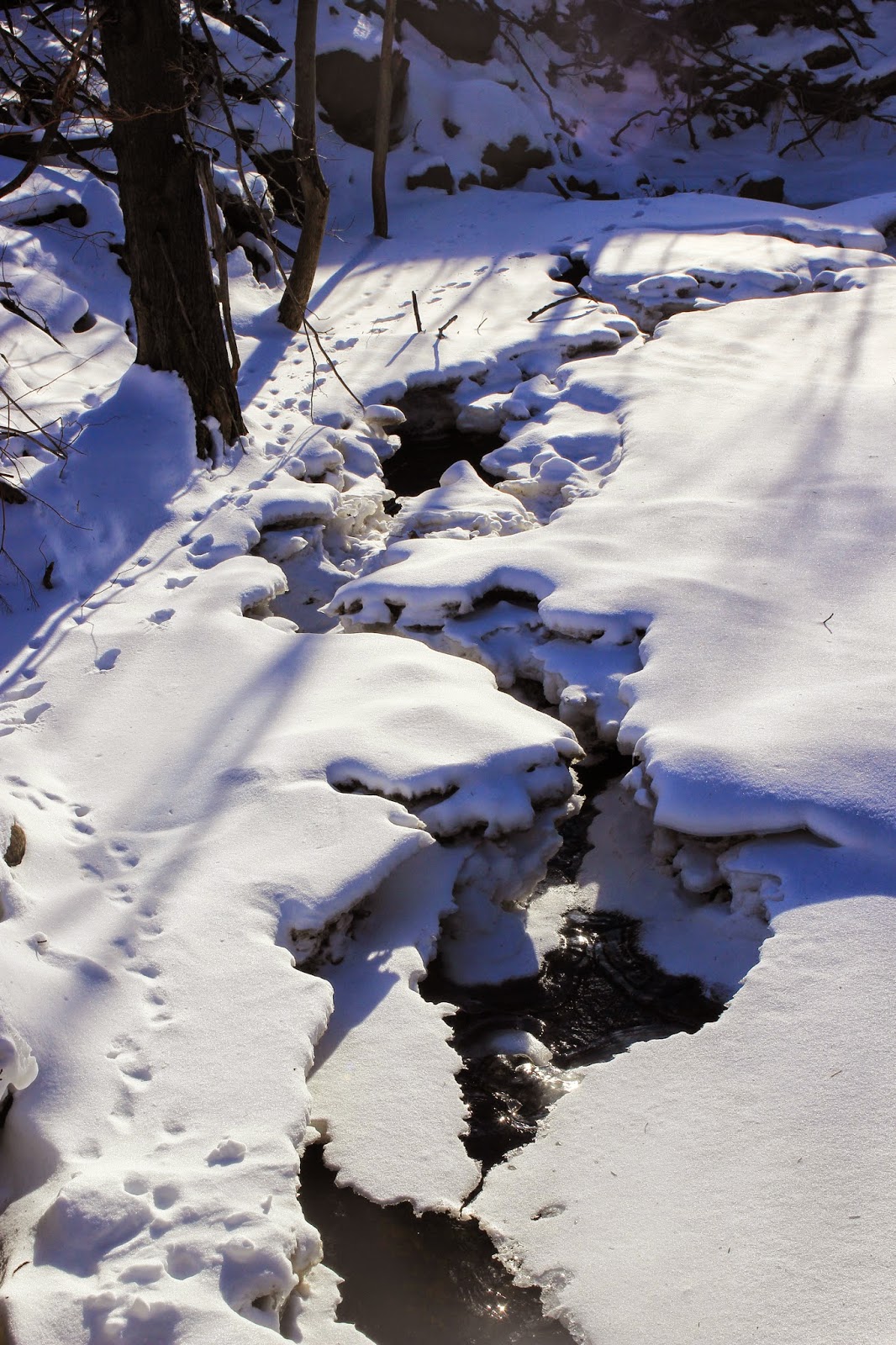 So as I watch the rest of the snow slowly melt around here, I'm going to scramble to get the rest of my winter photos up before it's fully into spring.  I don't mind dragging out summer and autumn on this blog, but I'm ready to be done with winter! 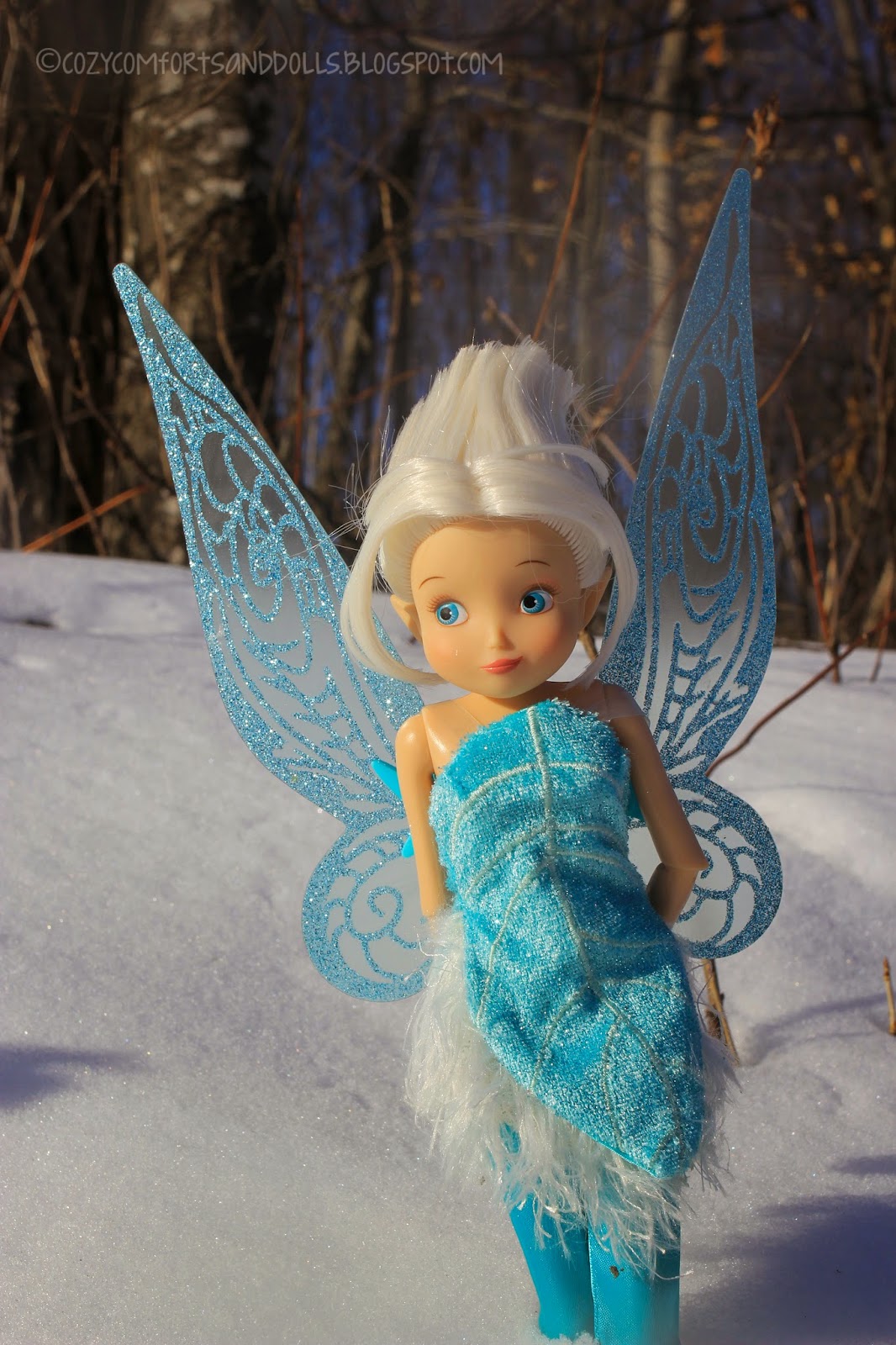 Overall, I think this little doll is cute and has a spunky little way about her.  She's a great addition to our Fairy collection and I hope this review has helped anyone that was on the fence about getting her!  I have to admit though, she'd probably be best for an older child or maybe one that is a die-hard Disney Fairy fan as my girls have kind of lost interest in her already.  That's ok though, as I am happy to have her sit in my office with the other dolls and come outside with me on these chilly photo shoots.

I hope you enjoyed my review and thanks again for stopping by. :)
xo