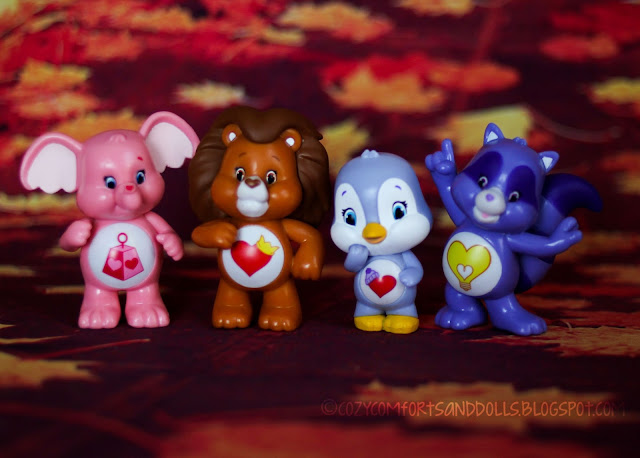 One of the blind bags series that I currently love to collect are these adorable Care Bears, which are from a cartoon series I used to love as a child.

These can usually be found at Target, Walmart and Toys 'R' Us and retail for just under $3.00.

They are currently on Series 4 of this line and this is the first line that features the Care Bears as well as the Care Bear Cousins, which are a group of colorful, caring woodland creatures of different animals species that are directly related to the bears. The live in a different place then the regular Care Bears called The Forest of Feelings. The Care Bears in general, have had a few different come-backs over the years, but recently the Cousins finally got some attention in the new Care Bears cartoon series on Netflix. 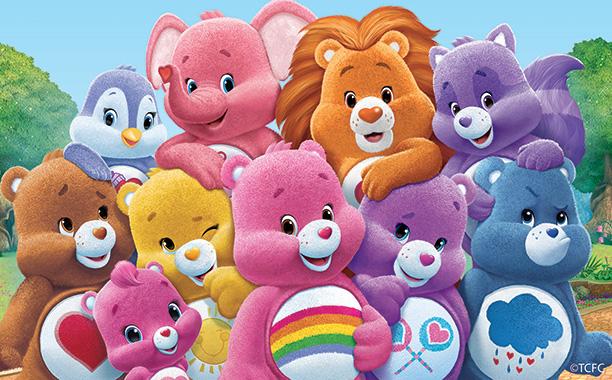 It seems as though only 4 of the Cousins made it onto the show, which is disappointing as there were so many other cute characters I used to love.

It's funny how there are so many bears, but only one each of the other animals.
I love the 80s when it comes to stuff like that. We never questioned it as kids, of course.


I put together a detailed review of each figure for any of you Care Bear fans out there as well as the codes assigned to each on on the back of the packaging if any of you are interested in collecting these cuties.

Below are some photos of each one that we got! 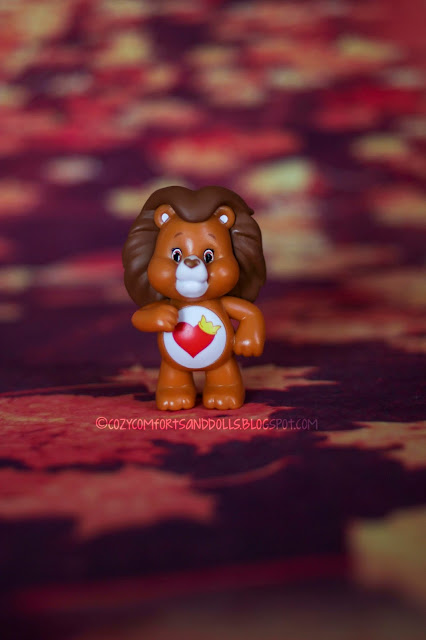 He is the assumed leader of the Care Bear Cousins with a loud and boisterous personality.
His belly badge can give anyone courage and confidence to believe in themselves.
He's a total lovey and loyal Leo. 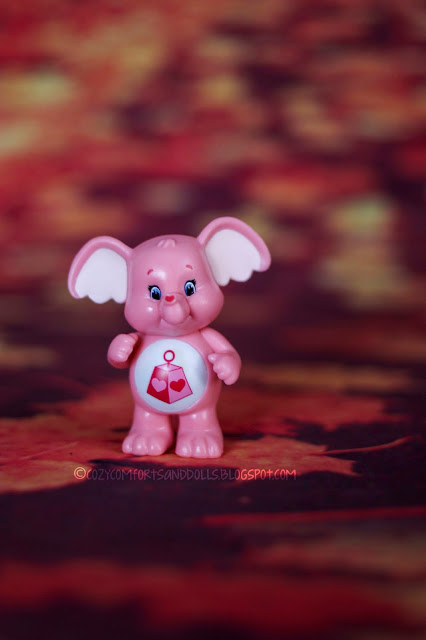 Back in the 80s, this character was male, but in the newer series, she's now a female.
Her belly badge can basically just force a whole lotta love into someone if needed, especially if they are kind of being a jerk.
She can also apparently help plants grow, according to Care Bear Wiki.
Despite being the strongest cousin, she's actually the most uncoordinated.
She's totally adorable!! 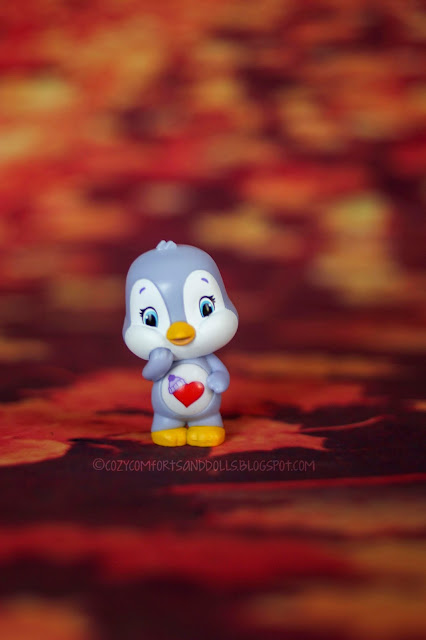 She is the smallest of the cousins and she is very warm and cuddly.
Her belly badge power can make anyone feel loved and cozy.  Perfect for this blog!
One way that she has really changed from the 80s is that she no longer speaks, and instead she communicates in animal noises which the other cousins interpret.  (Lol, weird.) 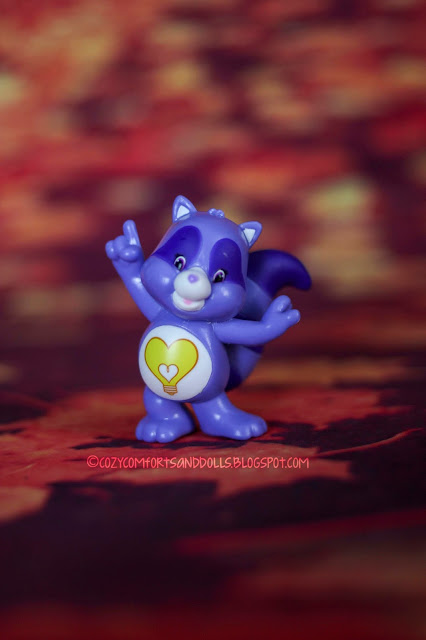 He is obviously the brains of the operation and his belly badge helps people receive innovative thoughts and ideas.  It also serves as a built in flashlight, when needed. #handy

I think the actor that voices this character on the Netflix cartoon, Ryan Wiesbrock, does such a great job of making this little guy so adorable.

The remaining figures we got were all Care Bears in their original solid coloring. (Unlike some lines that feature them in a glitter or pearlized finish.) 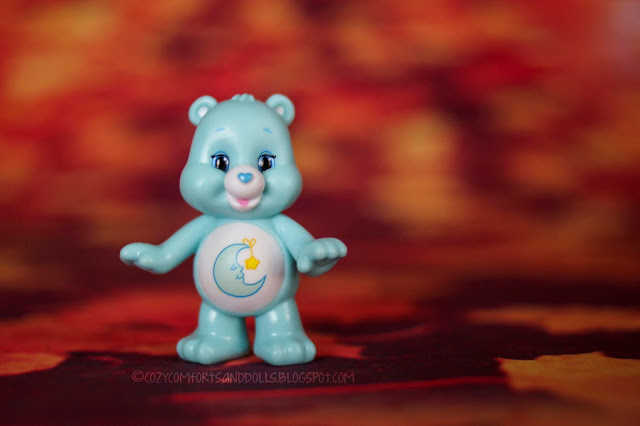 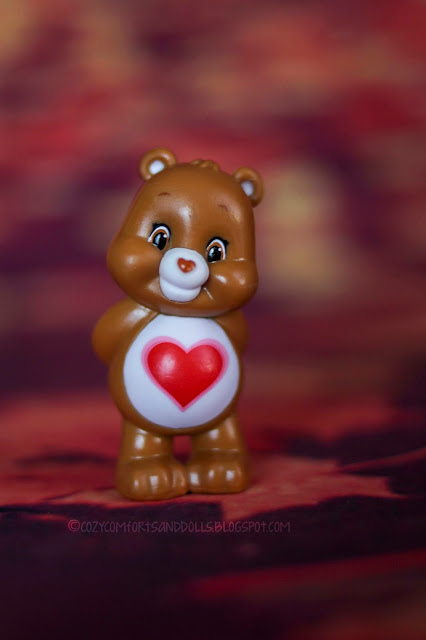 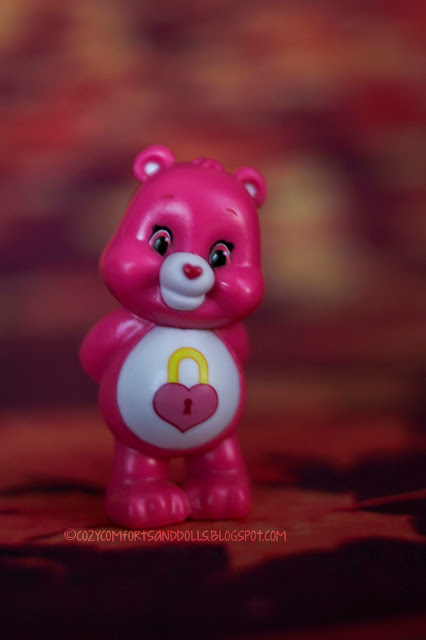 Secret Bear
She was orange in the 80s. 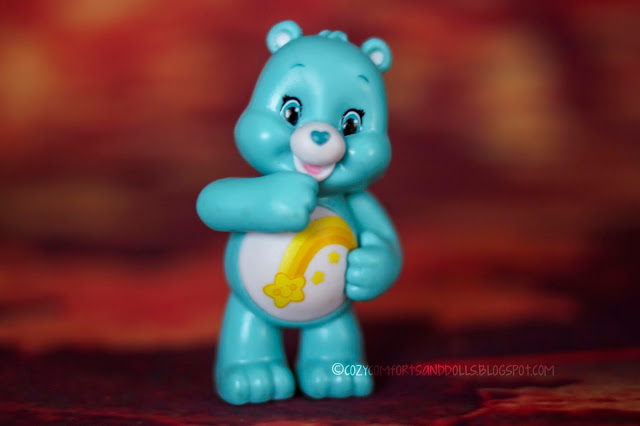 Wish Bear
One of my all time faves. 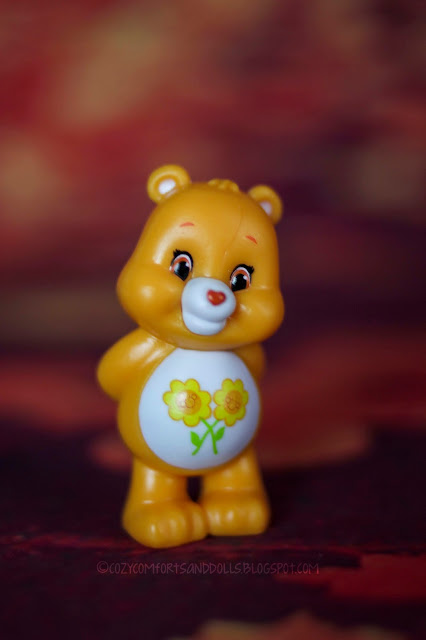 Friend Bear.
My sister had this one as a plushie growing up. :) 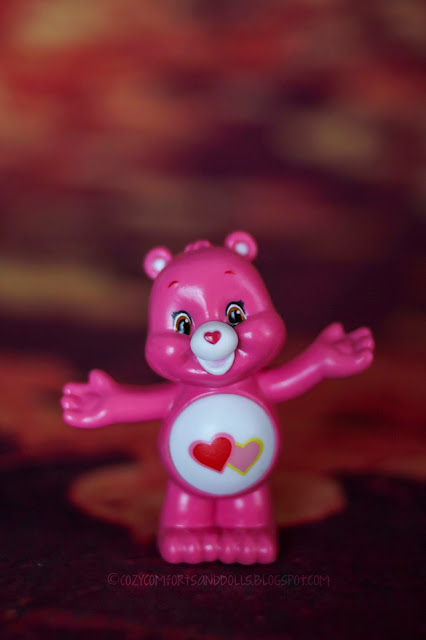 As I was playing with these figures, I decided to have a full-on photo shoot which you can see below.  I just couldn't stop as they are so adorable!

I broke them all out. 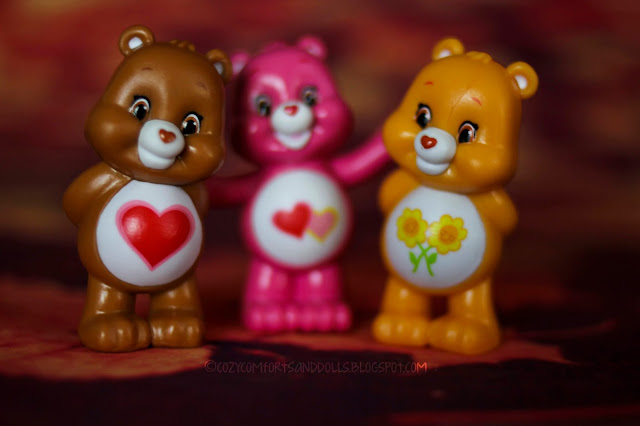 Of course I had to arrange them by pose. 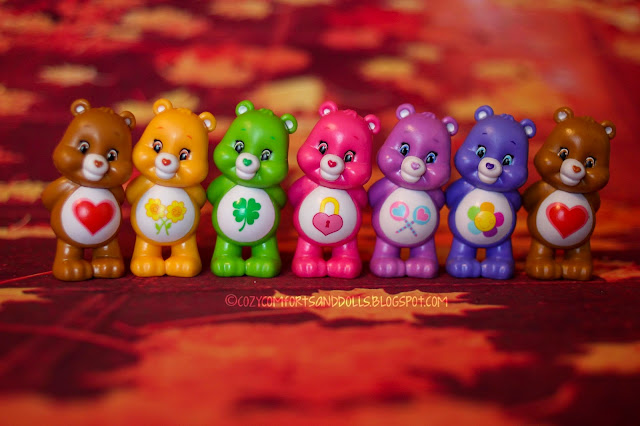 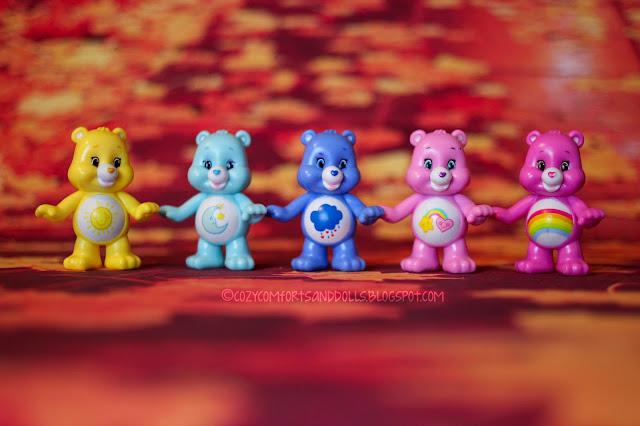 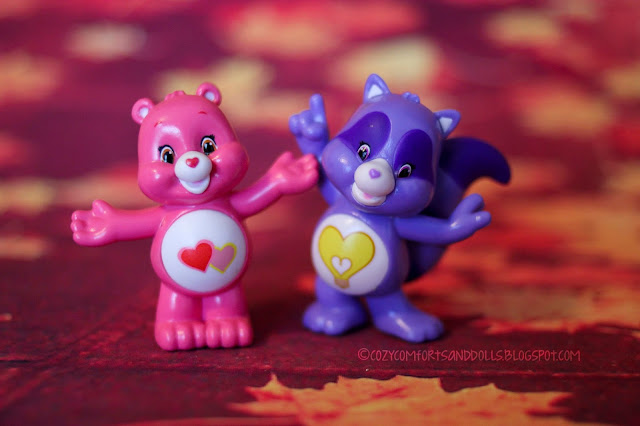 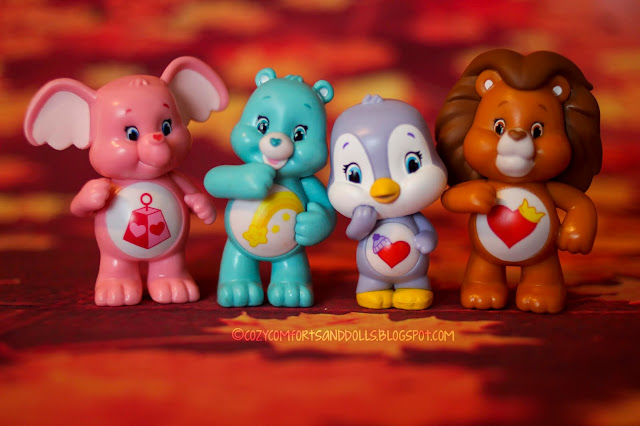 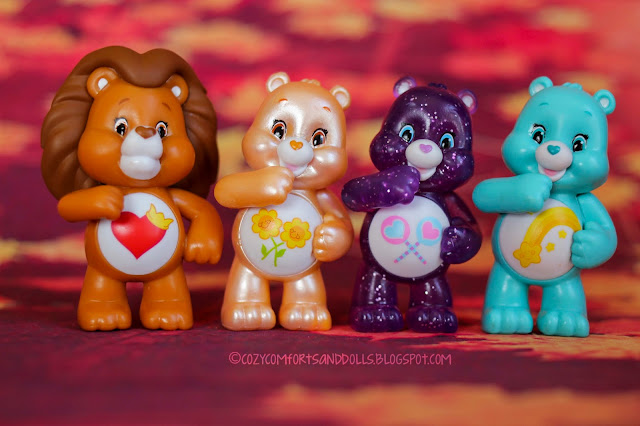 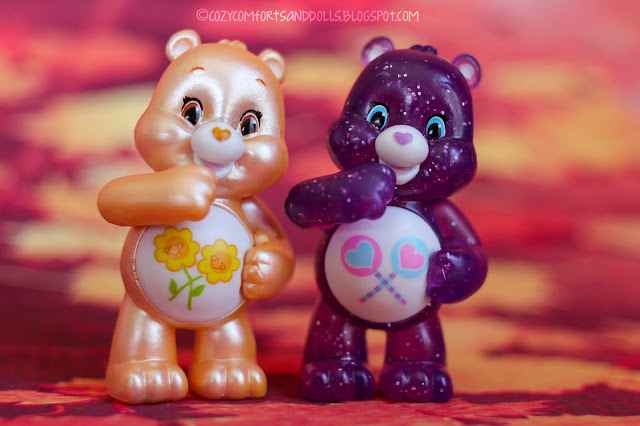 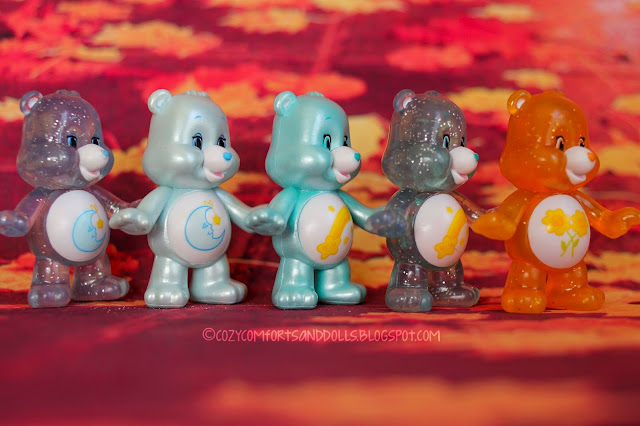 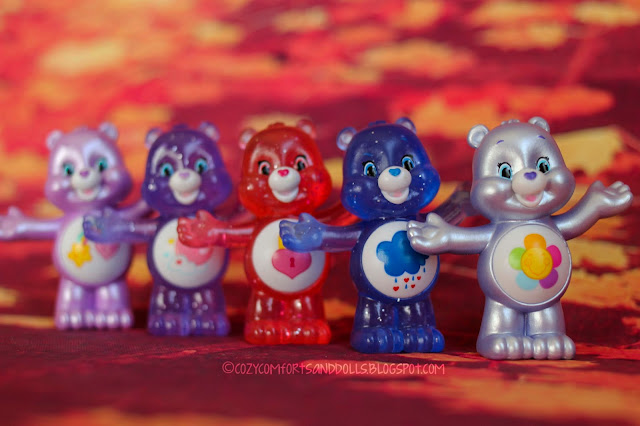 And then I had to group them by color, lol. 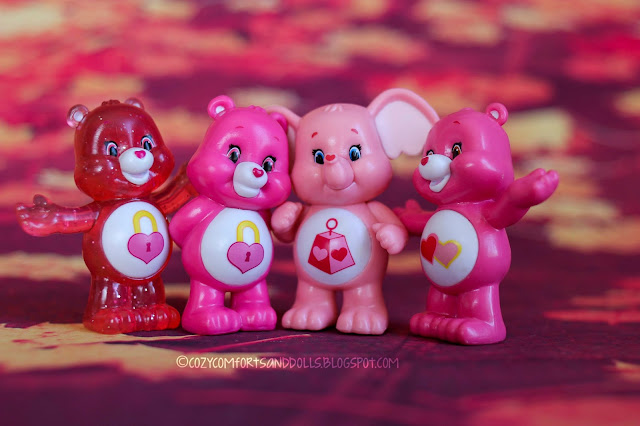 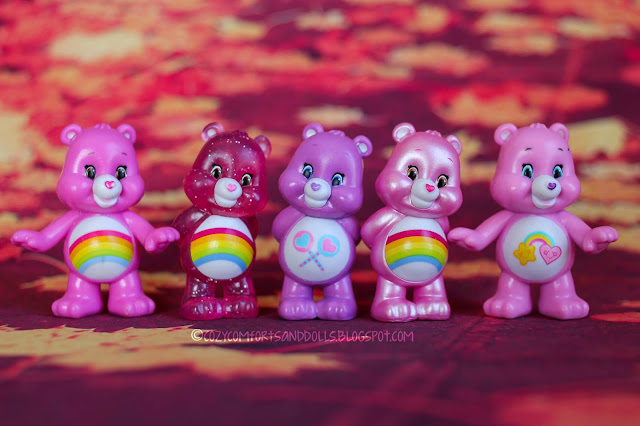 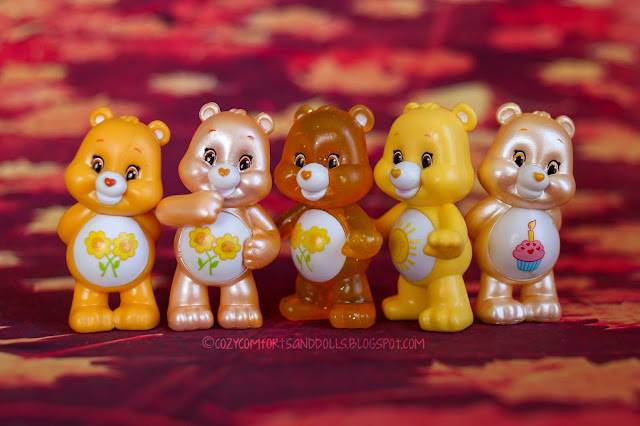 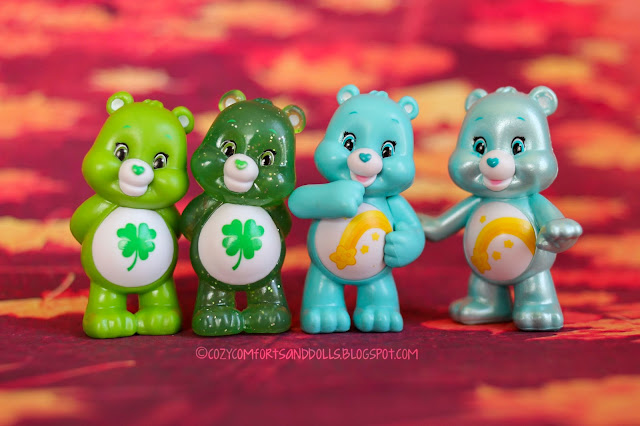 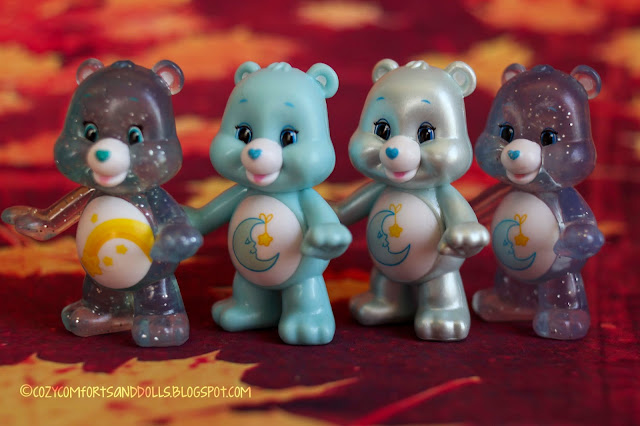 Overall, these have been so much fun for me to collect as they have such a nostaglic place in my heart.
I loved these bears and characters growing up so much and it's such a joy to share them with my daughters as they love them as well.

I hope you enjoyed this colorful post and enjoy the rest of your weekend.
We have even more snow coming our way so I'm hoping for a good "sleep-in" as well as getting some stuff done around the house.
I am tempted to make a video tour of my horribly messy doll room in an attempt to motivate myself to organize the hoarding, haha.

Thanks for stopping by!
xoxo Farrah 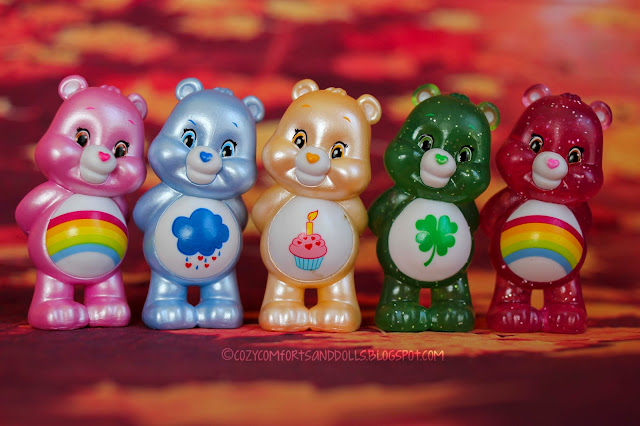