Hey guys,
Thank you so much for your feedback already regarding my last post about what you would like to see on my blog!  I'm finding it so helpful and I'll share the results with you later this week. :)
Someone who commented said that they enjoyed reading different opinions about doll lines or new stuff in general, which was really cool because I have never done an info or opinionated post before.
I figured with all of this American Girl drama centered around the recent controversy that is surrounding this brand, this would be a good place to start.

There are a couple of different topics that I wanted to share my thoughts about, but we'll start with Gabriela McBride, the 2017 Girl of the Year (who's around longer than just the year.)

GABRIELA MCBRIDE
As for Gabby's release, I'm a bit underwhelmed by her story and collection.  The doll itself is gorgeous.  The fact that she's basically a reissued Truly Me doll, though is pretty disappointing.  They could've added freckles or a beauty mark or maybe changed her hair parting, or something to make her a little more unique and special. 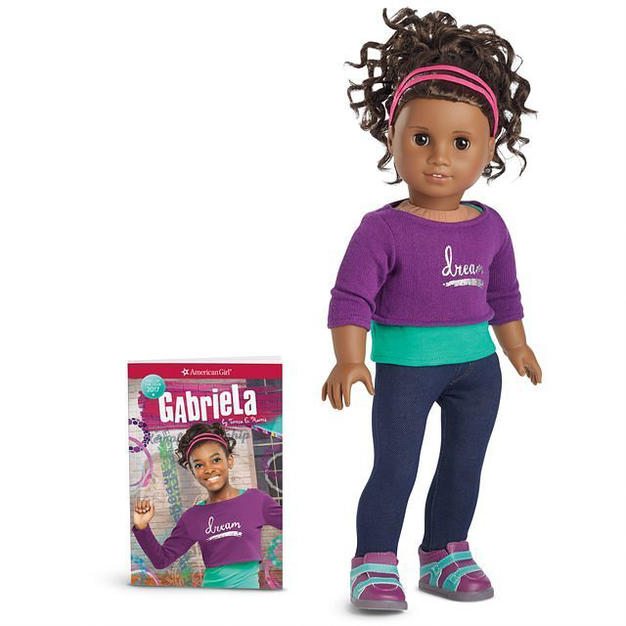 They also could've given her a more interesting story-line, in my opinion, but I do have to remember that these are made for younger girls so I understand that it's always going to be watered down and generalized in a way that would appeal more for an 8 year old.

It would've been great though, to see her interested in health, or teaching, or something to do with a traditional male dominated profession (like IT or criminal justice.) Getting girls into science, engineering or computer programming seems to be all the rage right now.  Oh well, gotta do what sells and little girls love dance stuff.

To me, at this point, I'm not sure what the different is between the GOTY and the Contemporary Line.  I am pretty bothered by the fact that they couldn't give Gabby more time in the spotlight.  Having the very first doll of color as the GOTY is a very big deal and should've been handled a bit more respectfully.

To plan a release of a new contemporary doll only a month after Gabby's debut feels like a big old slap in the face.
I don't know why I am so bothered by it, but I just am.
Tenney feels more involved and put together and feels like more thought was put into her design, her collection and her stories and I believe they are also making a movie. (Which they are not for Gabby.)
And to put a cherry on top, they also released a boy doll, which doubly steals the spotlight. 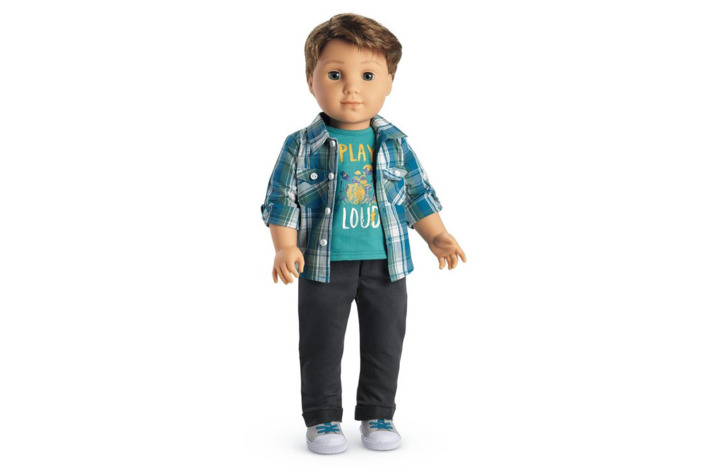 I do agree that it's great to have listened to customers and finally come out with a boy doll and I think it's great that little boys that want an AG doll now have an option, but again, it feels like a slap in the face. Again, it's just the timing that bothers me.

I personally am not a fan of boy dolls in this doll scale, but maybe it's because I have seen too many Instagram posts of custom AG boys with their little AG doll girlfriends and it sort of creeps me out because they all look like toddlers. ;)
I think they did a nice job on the design, but I sort of wish they had used a Jess mold or Marie Grace rather than Kaya's mold as I thought that mold was supposed to be special for only her.

Poor Gabby.  I definitely want to get her regardless, because I feel she marks AG history and that she is a very important doll, at least in my heart.
I will probably only get her PJs due to budget reason, although the poetry and dance theme just isn't really my thing anyway.  She's a gorgeous doll and I don't have any like her yet in my collection so I do hope to add her some day!

TENNEY GRANT:
Here are my thoughts on Tenney apart from my overall opinion of AG's poor timing to releases her. 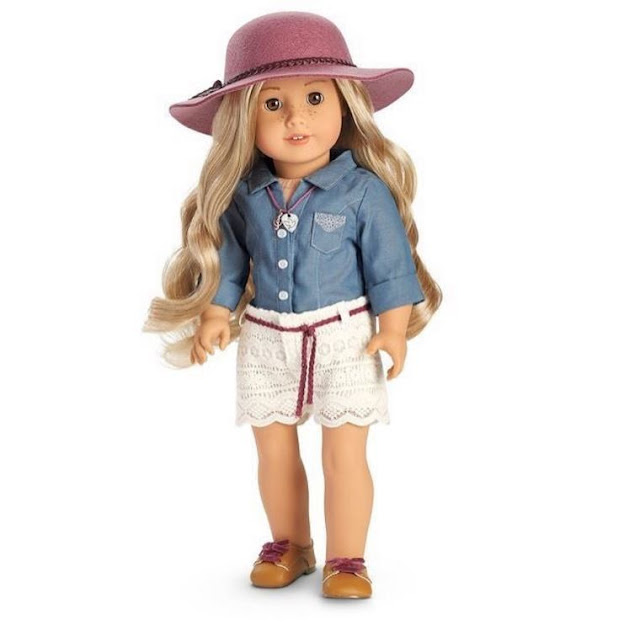 She's pretty cute, but she sort of looks like Caroline with a side part and brown eyes.  I'm not the hugest fan of the freckle design, but I do appreciate that they tried a new design and put the freckles on a doll other than a redhead.
Her meet outfit is pretty nice and her overall outfit collection is really, really cute.
I showed her to Pumpkin Pie (who will turn 8 in June) and she LOVED all of it.  She loved the doll and she said her favorite thing about her was her hair.  AG definitely knows what they are doing in terms of designing these dolls for young girls. She loved every outfit, the stage, the PJs, everything.  Genuis designing on AG's part.

Probably MY favorite part of her collection is her banjo.  I love miniature instruments!
Most likely I will not be getting this doll for my collection as I already have Caroline and she looks too similar for me to warrant getting Tenney.  Pumpkin Pie has already asked for her for her birthday so we'll see what happens between now and then.
I can't help it, but I think they did a great job with this doll and her entire collection.
Again, I just don't like how they timed it!! 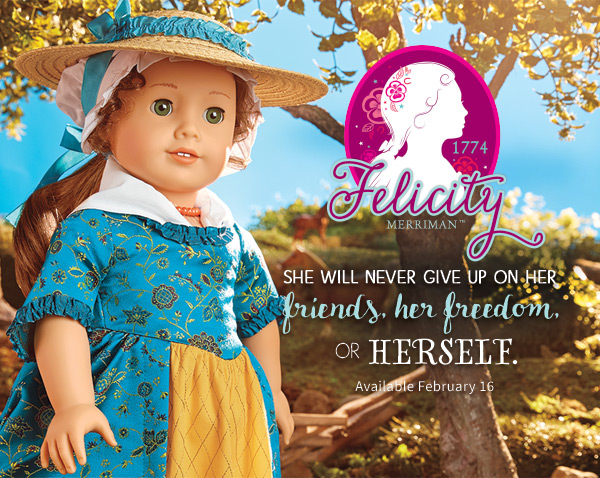 I like the original version better.
Maybe someday I'll find her at a good price.  Just not interested in the newer one at this time, but her book art is so cute. 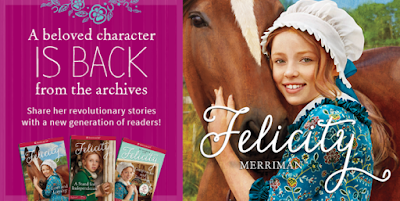 NANEA MITCHELL:
I don't want to spend too much time talking about her since we don't know a lot yet, but she is set in Hawaii during World War II and I LOVE HER.  I LOVE HER.  I LOVE HER. It sounds like she will be set to release some time this fall.
I think she's totally adorable and I love the concept. Look at those high-waisted nautical shorts!
She looks like a big Wellie Wisher and I have no problem with that.  She's just so cute. 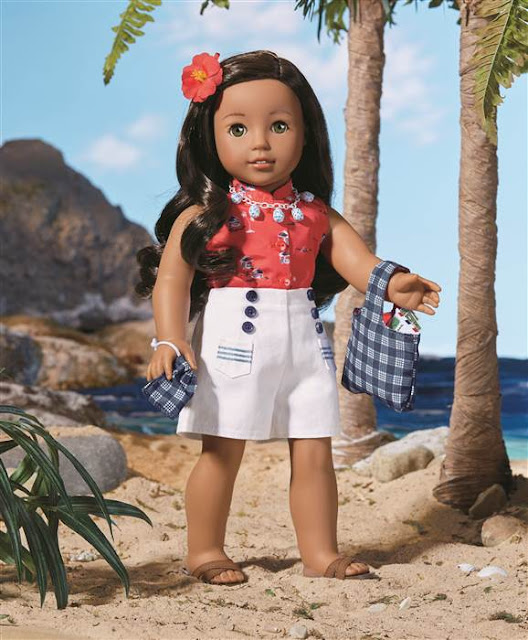 I know most of you are aware of AG's decision to start releasing Truly Me dolls, Contemporary characters and some select BeForever dolls (Julie, Melody and Mary Ellen) with sewn on underwear that is not removable and to be honest, I wasn't too bothered by it at first.  I've only been collecting AG dolls since 2015 so I don't have a huge history with this company so from a "change" perspective, it wasn't that big of a deal to me. I would prefer the regular bodies, but it wasn't a deal breaker.
My main issue now is just the overall way AG has handled this information release as well as how they are dealing with feedback.
Basically their reasoning for changing to this new style is so the panties don't get lost during play.
Like, what????  Are you serious??
That is the lamest reason!  If they would be up front and honest, that it was due to cost or they needed to redesign the bodies in regards to certain copyright issues with Pleasant Company, I'd be ok with that.
My other concern is the fact that they block and ban people that express opinions that they don't agree with from their Facebook info page.  I get it if people are being downright nasty or profane, but I don't think that is always the case. If I hung up on every person that had an opinion at MY job, I'd be fired.  They should be taking this feedback and really considering if these proposed changes are worth it.
It makes me sad the way the company has changed in quality and integrity.  Even sadder that despite this, their items become more and more expensive.
Thank goodness for Our Generation and their amazingly cute and well priced clothes and accessories! I'm glad that there are other options in this play scale.

It's just never going to be the same American Girl that I used to droll over as a preteen in the 90s and I guess that's that.

I think American Girl has marketed these changes brilliantly to coincide with their new releases. They sort of dropped this "permapanty" bomb on everyone, but then quickly distracted us with the colorful and shiny new release of several amazing new dolls and items.

Besides the new dolls, the most attractive things to me are the new items they added to the BeForever Line.  I don't have a Kit doll, but her collection is very cute and you guys know I love my Julie and the 70s in general. :)
These in particular are at the top my wish list:
Julie's Bastketball Outfit
Julie's Peasant Top Outfit
Julie's Bathroom (my grandmother had a pink toliet and sink)
Mary Ellen's Flamingo Swimsuit

At this point in time, I have one last AG order on the way (I finally ordered Addy and her accessories last week!).
As much as I like a lot of their products and want to collect it all, I'm not sure if I want to support buying from this company right at this particular moment due to some of these drastic changes and the downright disappointment with some of their decisions.  I may change my mind down the road, but for now, I'd rather just get my items from eBay or support people that make handmade clothing (or *gasp* actually try to make my own!)

Plus, I need to be saving my money and AG stuff is expensive, haha!

What do you guys think about all of this drama?  No big deal?  Are you ok with the changes and the way they handled all of these new releases?  Just curious to hear your thoughts.
Have a good week!