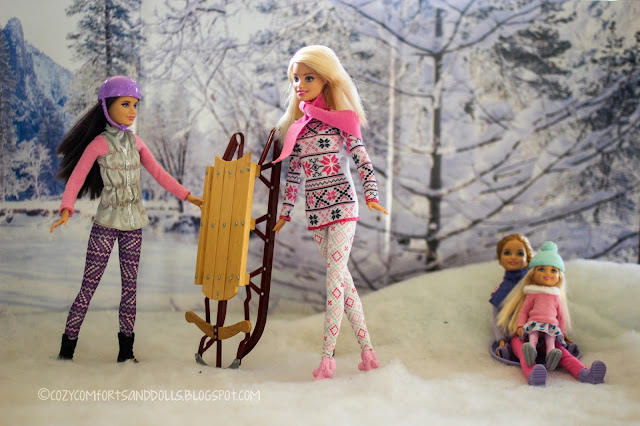 Hey everyone,
Today's post is a review of one of my favorite Barbie purchases this winter season called the Barbie Sisters Winter Holiday Fun 4 pack.
I purchased this pack from Target's website and I believe it was a Target exclusive pack, but I did find it on Amazon as well. (I feel like everything ends up on Amazon.)

This set originally retailed for $39.99, but I was lucky to have a 20% coupon as well as the 5% Redcard discount and free shipping so that brought the cost down a bit. Always a plus! 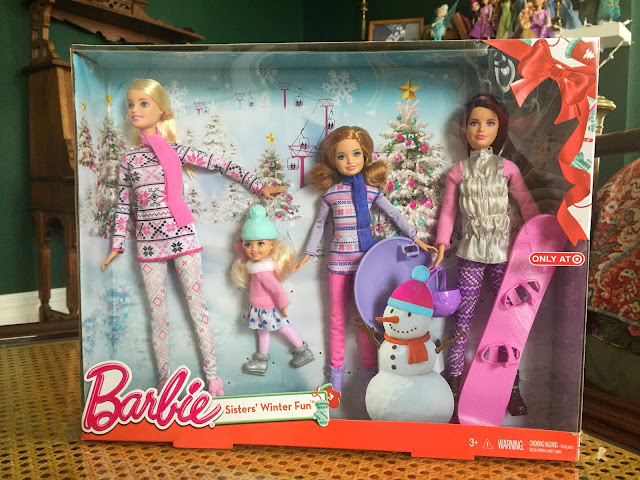 The overall design of this packaging was really appealing to me as it was very colorful and festive. 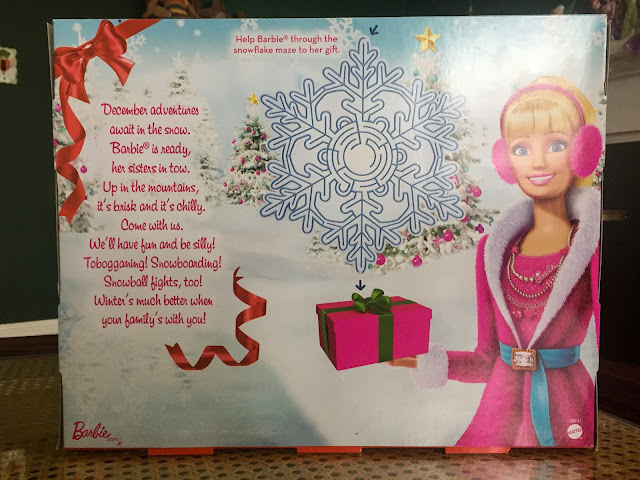 The back is cute and they even included a winter poem. (Which, to be honest, I didn't read until I put these photos on blogger, lol.) 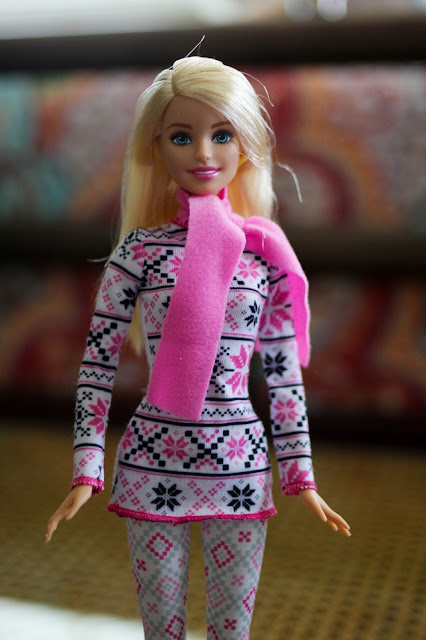 Here's Barbie straight out of the box.  She definitely had the worst hair out of the bunch.  There was quite a bit of glue seepage, unfortunately, which gave her a very greasy appearance.
Her outfit, on the other hand, is very cute and colorful and her facial screening/face up is very pretty. 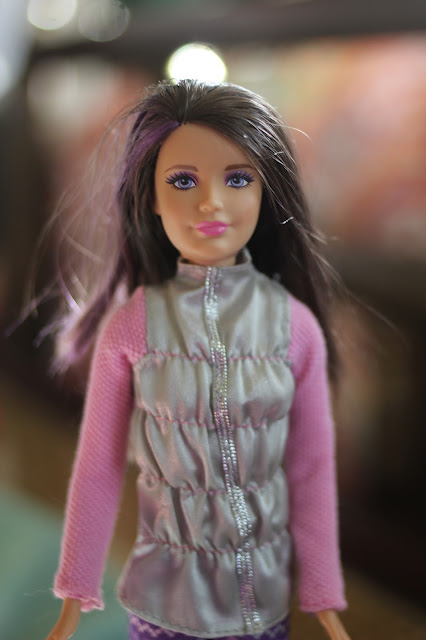 Skipper. straight out of the box, had the best hair of them all.  It wasn't until after I did a boil wash that I realized she had some glue seepage as well, unfortunately. 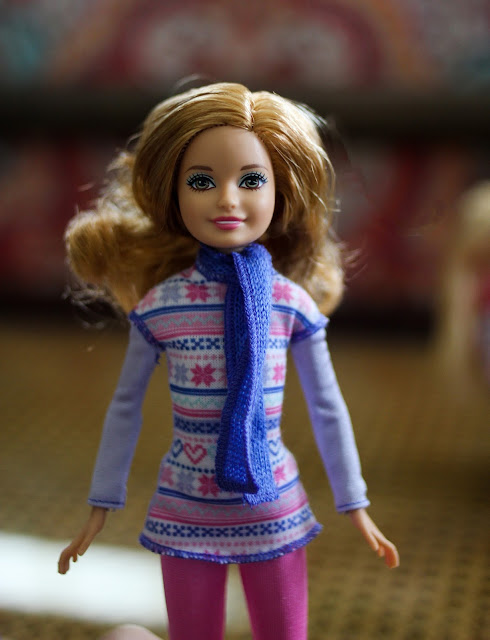 Stacie had really nice hair straight out of the box and it was very soft with no glue whatsoever.  I usually prefer a more natural looking face up for Stacie, so she looks a bit overdone to me, but heck...sometimes you just need to get glammed up for sledding so good for her. :) 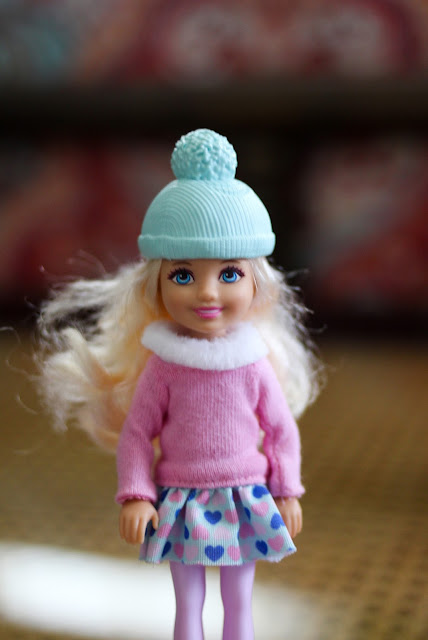 Chelsea had some pretty messed up hair straight out of the box, but straightened right out with a boil wash and looked great. 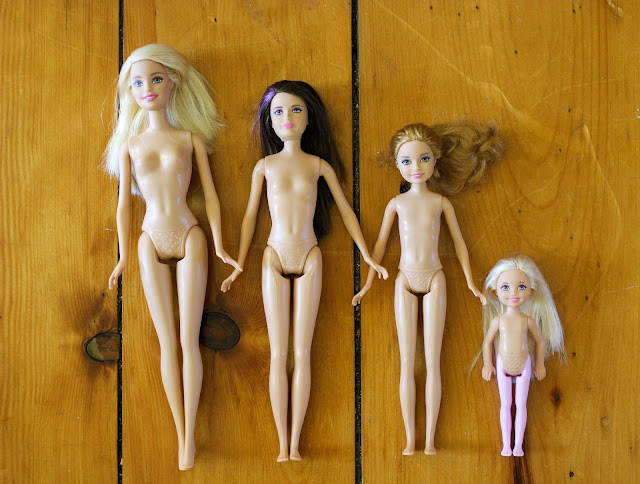 Here's a body type comparison.  They all have that slightly cheap hollow-ish plastic body that is typical of Fashionistas.  All have flat feet except for Barbie. The knees are completely fixed (not clickable) and they each have 5 points of articulation at the neck, shoulders, and hips.  The 3 older girls have ball jointed hips with some side-to-side flexibility.  Chelsea's are just hinged so her legs can only go front to back.  As you can see, Chelsea's pink tights are painted on. 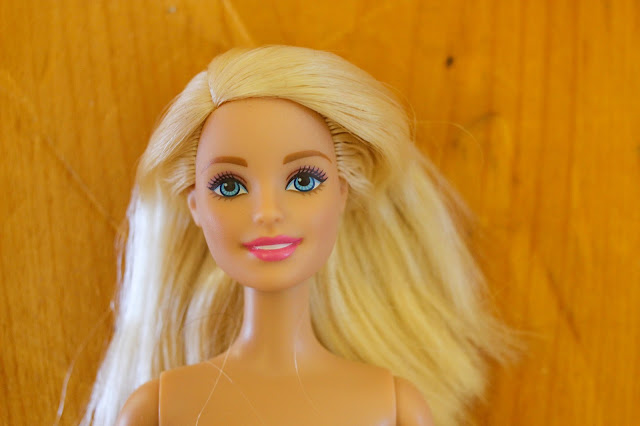 Barbie has a beautiful, sweet face and her lips are very pretty.  I ended up brushing talc powder through her hair in an effort to soak up some of that glue and it worked pretty well.  Despite her now smelling like a gentleman's club locker room, hair hair feels so much better.  I have heard of the "Goo Gone" method of removing glue, which I think I will try next time. 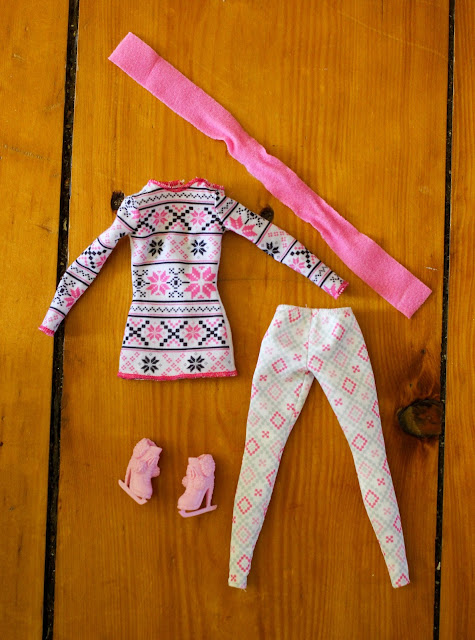 Barbie's clothes and (glam) ice-skates. I really appreciate that the scarves on both her and Stacie were removable. 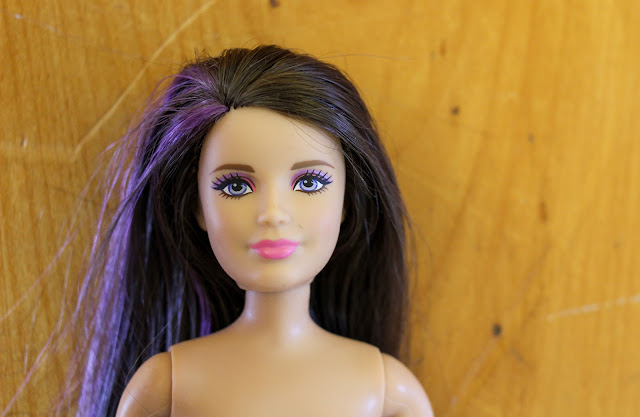 Skipper's facial close up.  For some reason, her lip/mouth screening makes her look a little irritated to me.  She has beautiful eyes, though. 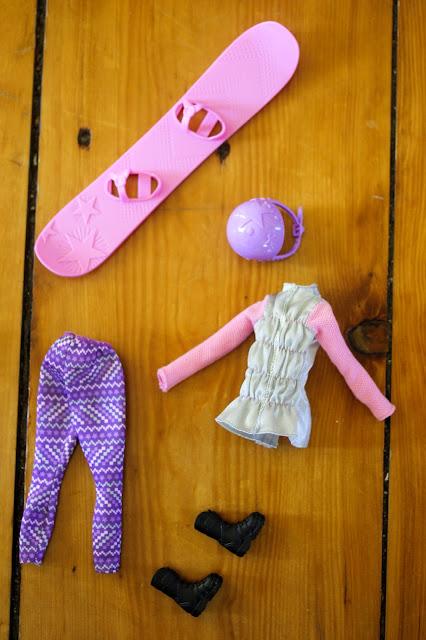 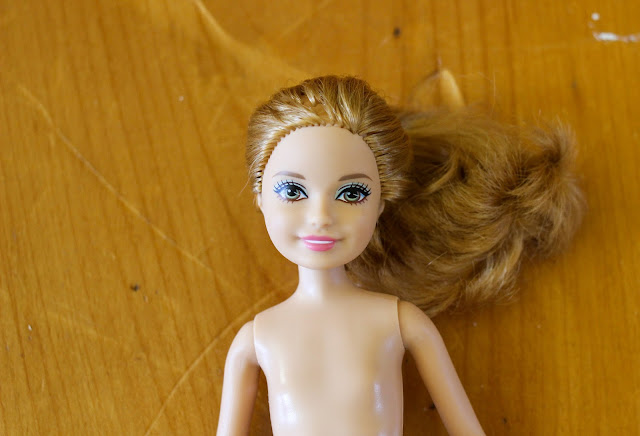 Stacie's facial close-up.  I love that she has those pretty hazel eyes. 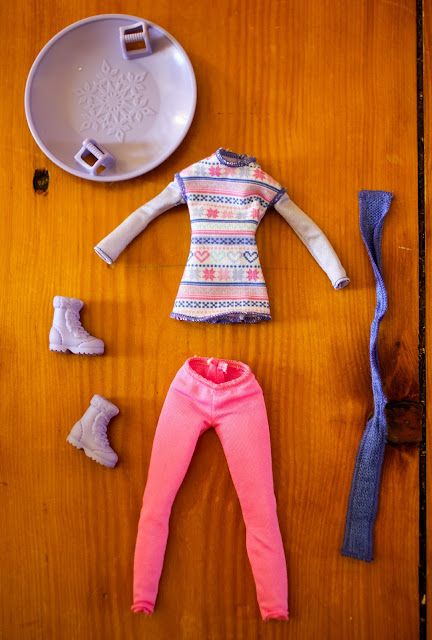 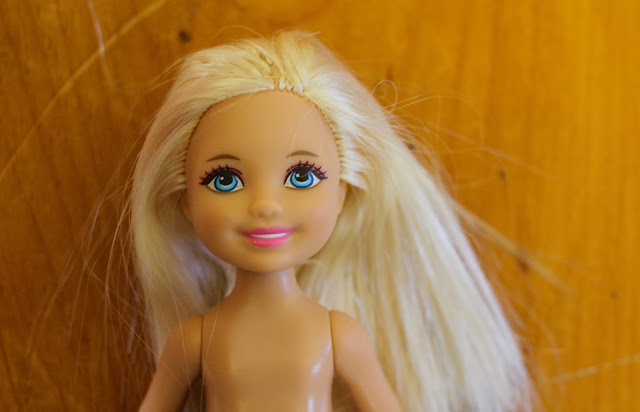 Chelsea's facial close up.  Look at those blue eyes! 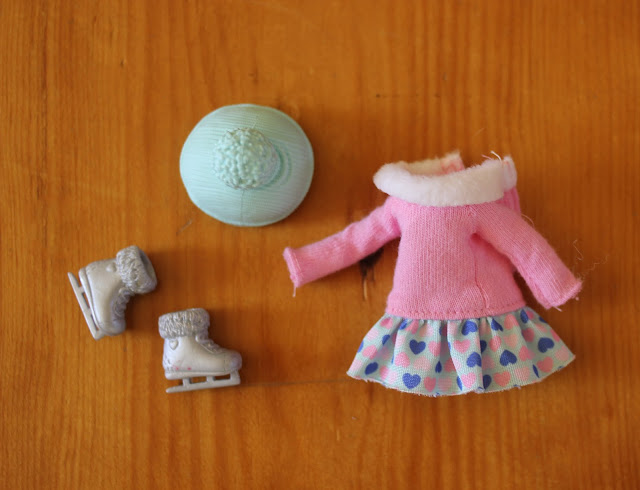 Next, during one of my lunch break walks, I shoved Skipper and Stacie in my coat for some outdoor pics. They were so much fun to pose! 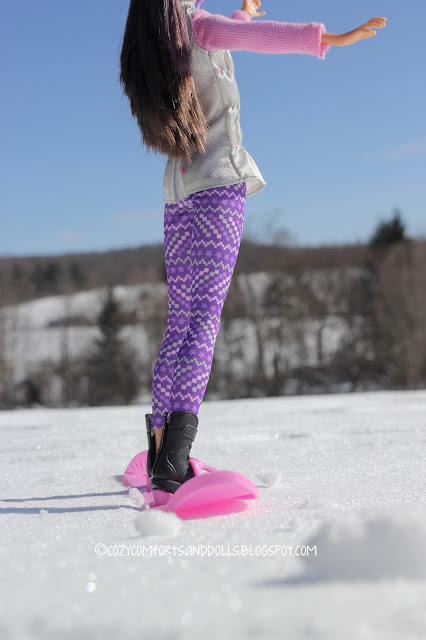 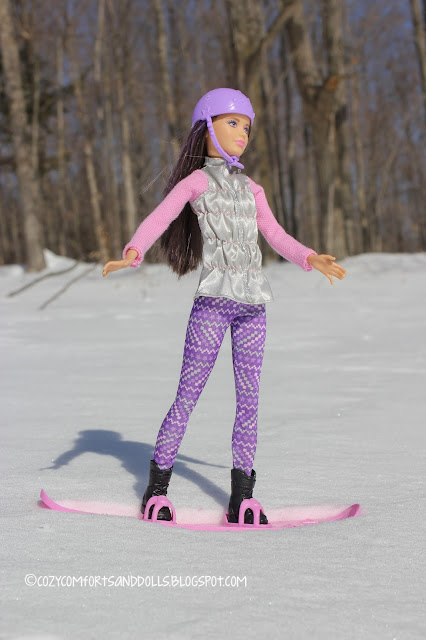 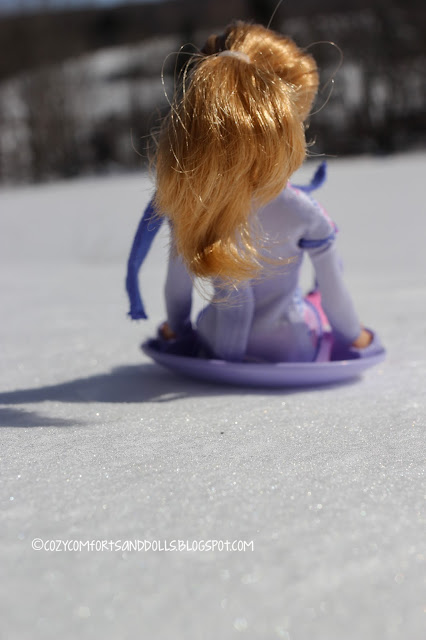 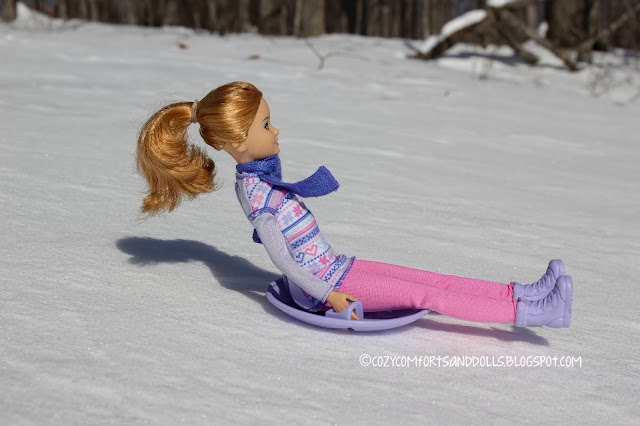 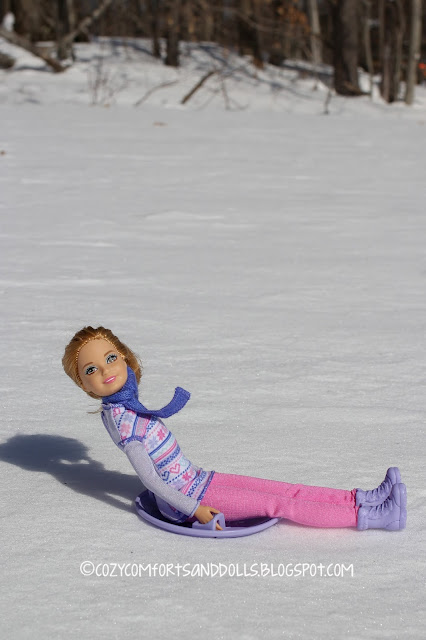 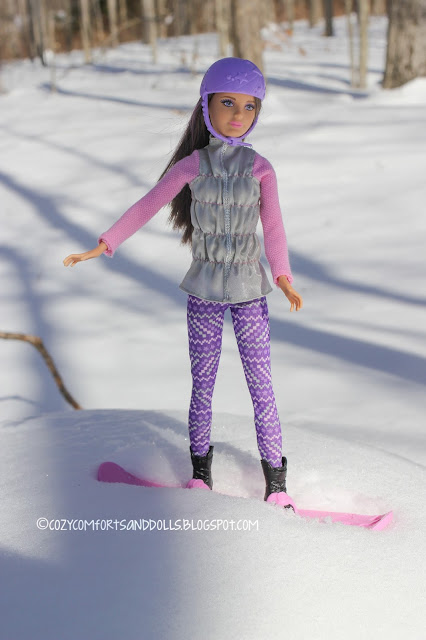 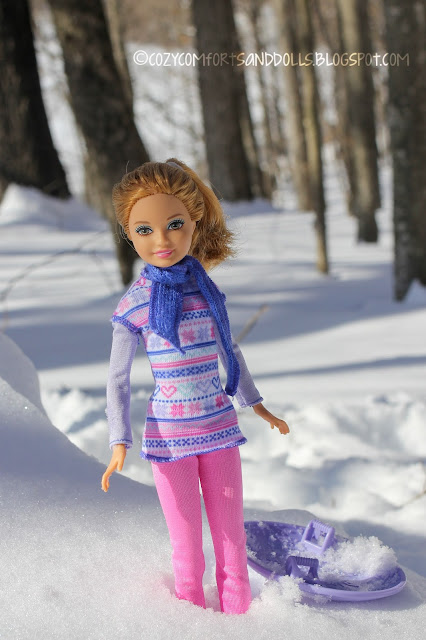 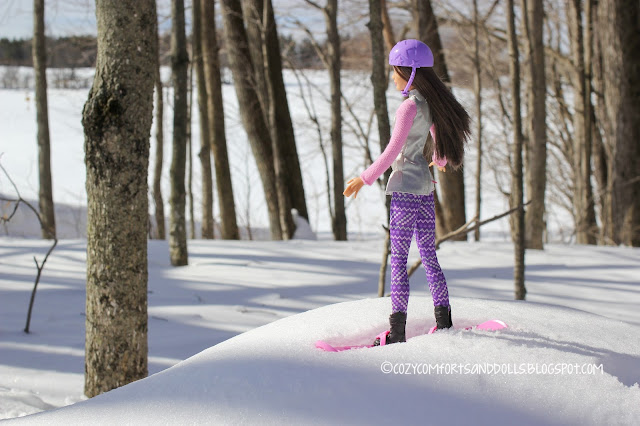 I wish I could snowboard.  Fun fact:  I tried a few times in college and it was a total fail, lol.  Maybe I just need to buy a snowboard and practice on the hills by my house sometime.  Or maybe skiing is easier?  Maybe I should just get snow shoes.
:) 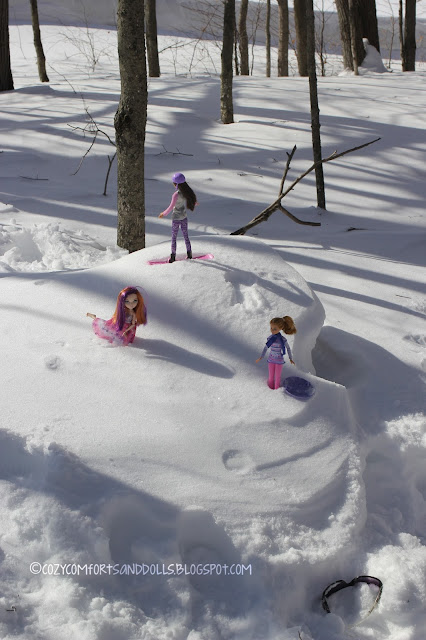 Behind the scenes!  You can see I had Ever After High Poppy Fairest on Ice with me as well as I was also taking some photos for my Instagram and Flickr accounts. :) 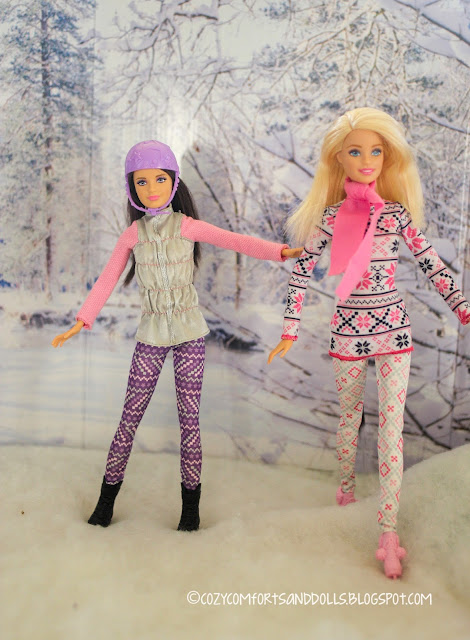 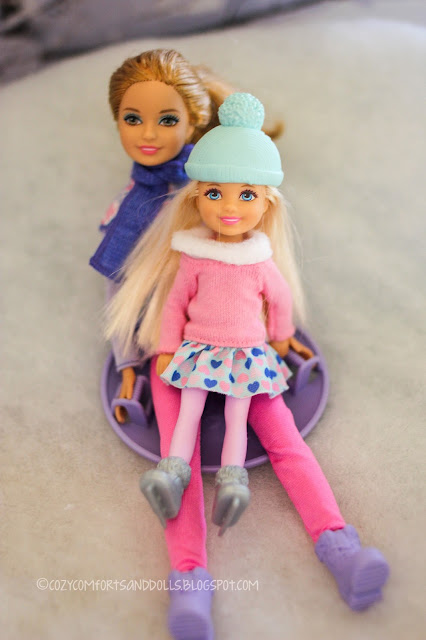 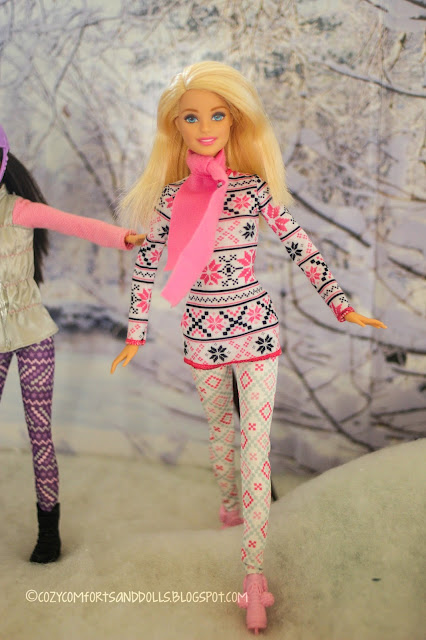 Overall, I really love this set.  I'm not the hugest fan of the glue/hair Barbie even though it did get better after the talc powder treatment, but no matter.  I can always swap her out for a different Barbie as I have several others that look just like her.  The outfits are a total win for me, though as I love that they are so colorful and fun and who can resist "winter wear"??  I can't. 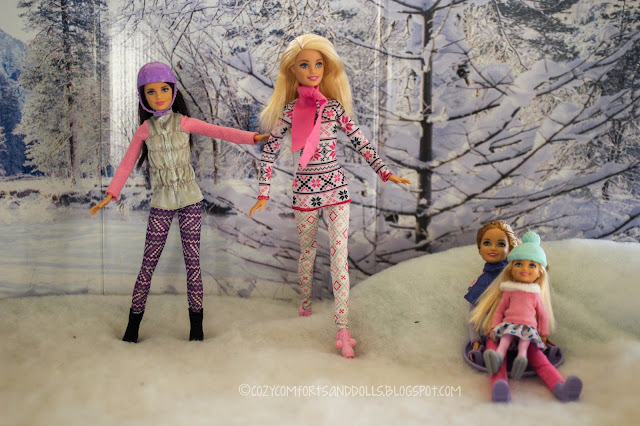 I hope you guys enjoyed this review and thank you, as always for stopping by the blog today.
I felt this was a great time to post this particular doll set since we got about 2 feet of snow yesterday! Or least it feels like that with all drifts we have now from the wind.
See you next time!
xo Farrah
Posted by Farrah at 10:18 PM